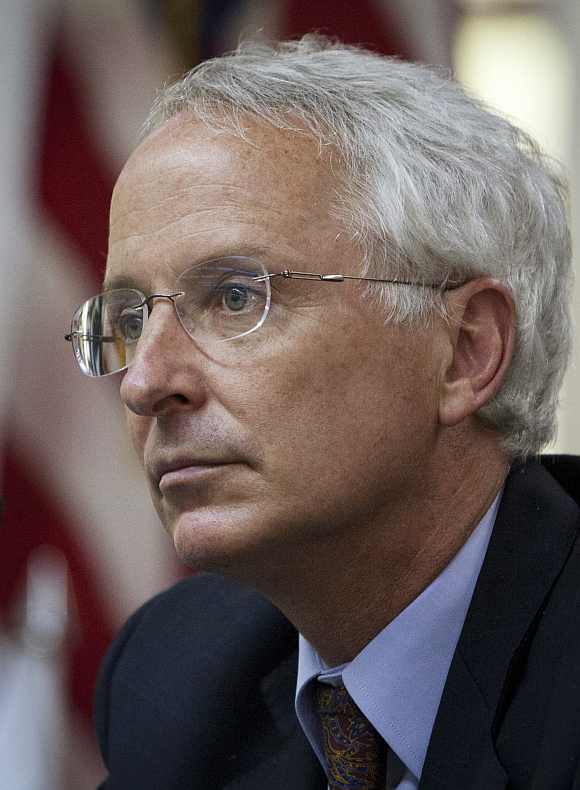 As Hafiz Saeed openly made fun of Washington over announcing a bounty on a man who moved freely across Pakistan, Munter, who is known for his conciliatory approach, decided to pacify the JuD chief in a one-on-one meeting in Islamabad which was kept secret and which is still not being confirmed officially by either side, reports Amir Mir from Islamabad

United States ambassador to Pakistan Cameron Munter, who was tasked to help steer America's uneasy alliance with Pakistan through one of its lowest points since the 9/11 attacks, has decided to bow out prematurely after serving less than two years, mainly because of the growing influence of the Central Intelligence Agency and the Pentagon in shaping up diplomatic ties with Pakistan.

Munter, who was sworn in as ambassador to Islamabad almost 18 month ago, in October 2010, has decided to quit at a time when bilateral ties between Washington, DC, and Islamabad are at a critical juncture, touching their lowest ebb. The year 2011 was an awful year for Pak-US ties. The worsening of Washington-Islamabad relations was triggered by a series of bilateral crises, including the arrest of a CIA contractor in January 2011, the May 2011 covert military raid that killed Osama bin Laden in Abbottabad and the ongoing US drone strikes in the Federally Administered Tribal Areas of Pakistan bordering Afghanistan. 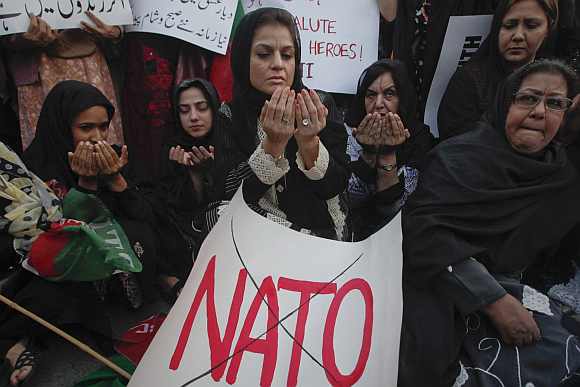 However, the relations between the two allies in the war on terror plunged to an all-time low in November 2011 when a deadly Nato air strike killed 24 Pakistani soldiers in the Salala area along the Pak-Afghan border, thus prompting Islamabad to suspend Nato supply routes into Afghanistan.

It is a well-known fact that Munter used to support Islamabad's positions that the US should apologise to Pakistan over the Nato air strike and the subsequent killings of its soldiers and that the CIA-run drone campaign in the tribal areas should come to an end because they are widely condemned by the civilian population in Pakistan. At times, Ambassador Munter used to disagree with the Pentagon and the CIA over how to deal with Pakistan.

However, neither the Obama administration nor the Pentagon and the CIA were willing to soften their position, which eventually led to the current stalemate between the two countries. But if some Pakistani media reports are to be believed, Munter's alleged meeting with one of the most wanted terrorists -- Jamaat ul Daawa ameer Hafiz Mohammad Saeed -- is the principal reason for his premature exit. 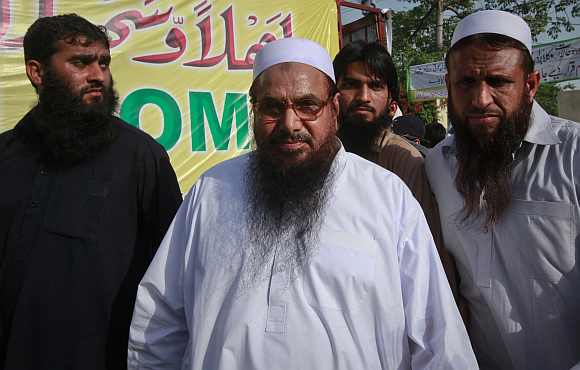 Munter abruptly decided to quit his job last week, hardly 24 hours after the US Secretary of State Hillary Clinton declared Saeed responsible for the 26/11 Mumbai carnage and announced that the US was prepared to work with India to bring the JuD ameer to justice. Munter's decision to quit ambassadorship prematurely has already been confirmed by Mark Stroh, the embassy spokesman, saying: "He will be leaving this summer at the conclusion of his two years in the job. It is not because either the Pakistani government or the US government is dissatisfied with his performance. In fact, the ambassador had been weighing the option of continuing for a third year, but decided against it."

On the other hand, however, well placed diplomatic officials in the federal capital claim that Munter's decision to quit has more to do with some behind-the-scenes developments that took place in Islamabad following the April 1, 2012, decision of the Obama administration to put a price of $10 million on information and evidence leading to the arrest and conviction of Saeed, who is also the founder of the pro-Kashmir, proscribed jihadi organisation -- the Lashkar-e-Tayiba. The head money was announced for Hafiz Saeed's alleged role in the 26/11 Mumbai terrorist attacks that killed 166 people, including many foreigners.

While some high-ups in the Pakistani foreign office claim that Munter has taken the decision on his own for not being kept in the loop by the US state department and due to the growing influence of the CIA and Pentagon in shaping ties with Pakistan, there are those in the diplomatic circles who maintain that the envoy is being made to quit by his seniors because of his seemingly soft line over Saeed's bounty which was not valued much by his bosses. 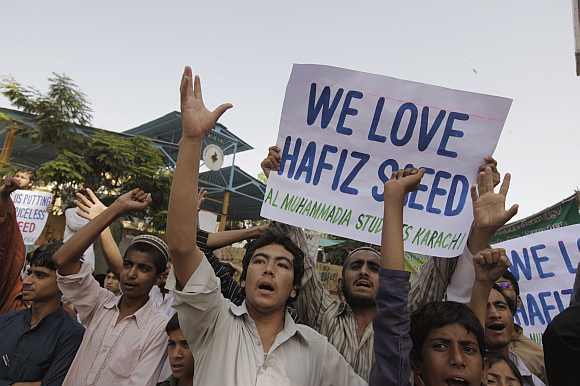 However, the instant cause of Munter's premature exit is believed to be his clandestine meeting with Saeed that allegedly took place in Islamabad almost a month ago, after the US decided to place a $10 million bounty on the JuD ameer for his alleged role in the Mumbai attacks.

Diplomatic circles claim that the Munter-Saeed meeting was intended to remove misunderstandings created by the April 1 bounty announcement, which had prompted the JuD ameer to step up his anti-US public campaign by laughing off the American action against him. As the JuD ameer openly made fun of Washington over announcing a bounty on a man who moved freely across Pakistan, Munter, who is known for his conciliatory approach, decided to pacify Saeed in a one-on-one meeting in Islamabad which was kept secret and which is still not being confirmed officially by either side as it is perceived to be damaging for both the parties.

The American embassy spokesman in Islamabad has categorically refuted any meeting between Munter and Saeed. "Ambassador Munter has never met with Hafiz Mohammad Saeed and no US official has made any promises to, or agreements with, Hafiz Mohammad Saeed who is a wanted terrorist responsible for the deadly attack on Mumbai in November 2008 that killed 166 people, including six Americans. The JuD ameer is subject to UN Security Council Resolution 1267/1989 sanctions and there is an international responsibility on the member States to bring the perpetrators of the 26/11 Mumbai attacks to justice," the US embassy spokesperson said in an officially released press release.

Approached for comments, the central Jamaat ul Daawa spokesman Yahya Mujahid too refuted reports of a meeting between Saeed and Munter, saying his ameer is not at all interested in holding secret meetings with someone who represents the enemies of Islam and Pakistan (the United States) who have butchered millions of Muslims in Afghanistan, Iraq and elsewhere. But the fact remains that Munter had declared in Lahore (soon after his alleged meeting with Saeed) on April 29, 2012, that the US government did not announce any bounty or head money specifically for the JuD ameer and that the matter had been misreported by the Pakistani media.

"The Pakistani media is very active and responsible but it misreported the issue of Hafiz Mohammad Saeed. Though Hafiz Saeed is a suspected accused of the Mumbai terror attacks, the US government didn't place either a bounty or a head money for him," said Munter while replying to media queries after addressing the annual dinner of the American Business Forum in Lahore. He added that the head money was based on information received that could lead to arrest or conviction of any UN declared terrorist in any country.

Diplomatic circles in Islamabad say these developments were brought into the knowledge of the US secretary of state who did not appreciate Munter's actions which were apparently rolling back his own government's tough stance that was later spelled out by Hillary during her Indian tour when she bluntly reprimanded Pakistan for not taking any action against Saeed.Delivering a speech in Kolkata on May 8 and lending support to India to fight terrorism, Hillary confirmed the bounty on Saeed. 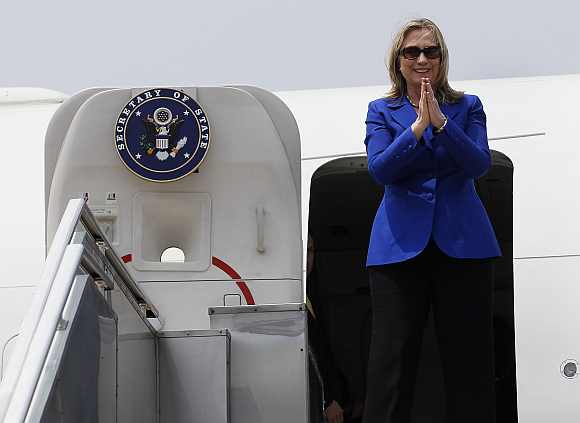 Calling the JuD ameer as one of the principal architects of the 26/11 attacks at Mumbai in India, Hillary said the US bounty meant to show solidarity with the people of India. "I am well aware that the Pakistani government had not yet taken steps to help secure Saeed's conviction. We're going to be pushing that. So it's a way of raising the visibility and pointing out to those who are associated with him that there is a cost for that," Hillary said while referring to the head money offer, adding that Pakistan should do more to ensure that its territory is not used as launching pad for carrying out more terrorist attacks".

Hardly 24 hours after Clinton's Kolkata speech, which clearly negated Munter's earlier stance on Saeed's head money issue, the US ambassador made public his decision to quit his post in Islamabad prematurely. Hardly 24 hours after Munter's decision was made public, Washington and Islamabad moved further away from each other, with the US Congress seeking new restrictions on American aid to Islamabad.

A bill moved in the US house appropriations subcommittee for state and foreign operations on April 9 has sought making US assistance to Pakistan subject to cooperation certification from the US secretary of state who has already angered the Pakistani government by publicly criticising Islamabad [in India] for providing a launching pad to terrorists. She also claimed that the new Al Qaeda chief Ayman Al-Zawahiri, like his predecessor Osama bin Laden, was hiding in Pakistan.