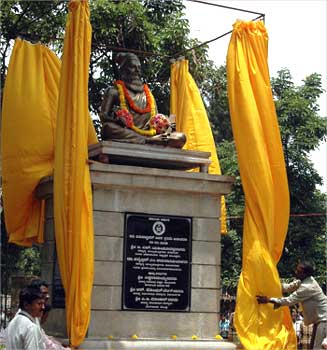 The two chief ministers defied all protests and warnings by pro-Kannada groups and went ahead and unveiled the statue of the Tamil saint-poet.

For the Tamil population in Bangalore it was a dream come true. The statue had been lying covered at the Ulsoor area since the past 18 years and despite several requests and demands, the statue had not been unveiled.

Thiruvalluvar was a celebrated Tamil poet who is believed to have lived between 2nd century BC to the 8th century AD. He wrote the Thirukkural, a work on ethics in Tamil literature. 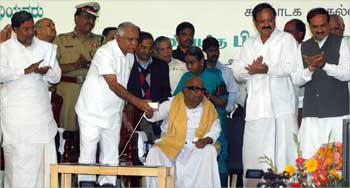 The Tamil Nadu chief minister arrived in Bangalore in a heavily-guarded convoy to the cheers of the people.

He was received by his counterpart, B S Yeddyurappa who has been fighting various groups in his state to ensure that the unveiling of this statue took place.

At around 11.30 am, the statue was finally unveiled by both the leaders. Interestingly, the unveiling of the statue was controlled by a remote, which was placed nearly 100 meters away from the statue. 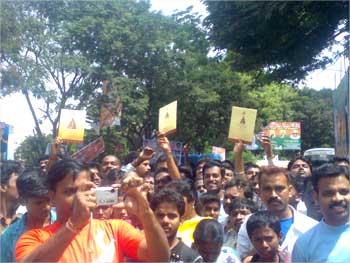 The streets of Ulsoor were packed with people who were seen dancing and chanting.

Both chief ministers, in their respective speeches, said that this is purely a cultural issue and politics should be kept away.

This is just an exchange of culture and there is nothing political about it. 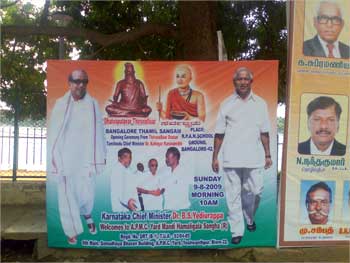 Karunanidhi invited the people of Karnataka to Chennai in large numbers for the unveiling of the statue of Sarvajna, the historic Kannada poet.

Sarvajna, believed to belong to 18th century, is known for his 'Tripadis' (three-line poems) on life, religion, beliefs and problems of daily living.

Karunanidhi said that Karnataka had kept up its promise and now they too would honour the same on August 13.

Yeddyurappa said that the people of state had supported him on this issue and the respective governments had decided to go ahead with the unveiling of the statues in both states. 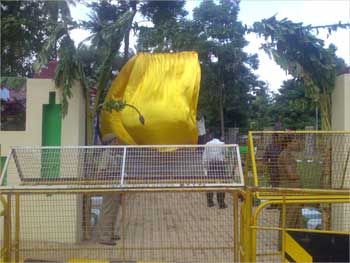 Castigating the Kannada outfits, which had called for a bandh to protest the unveiling, the High Court too had dismissed a petition seeking a stay on the unveiling.

"Let us not divide the nation on caste, language...we are all one," the court said in its observations, adding: "When the country is emerging as a major power, let us bury all this"

Police presence was heavy with nearly 4000 personnel deployed all around the city. Roads leading up to the venue were blocked. 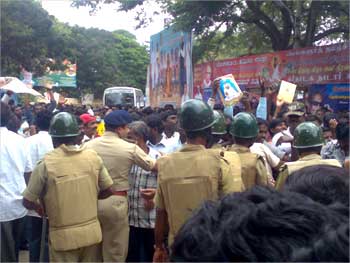 The bandh call by the Kannada activists was partial in nature with shops only in a few areas remaining shut. The roads were bustling with activity as usual and public transport was not disrupted.

Despite such elaborate security arrangements, some activists staged a protest in the Malleshwaram area. The police picked up 50 activists. In all, 400 activists have been arrested since the past three days.