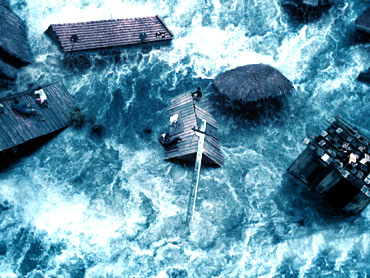 The problem is that nations or states are always ready to 'share' water with others living upstream, but their perception changes when the question comes to 'sharing' with lower riparians, says Claude Arpi after attending a 3-day conference in New Delhi on conflict resolution in the faceoff over water

The ban on the release of a new movie in Tamil Nadu made it to the front page of the national press. Why? Because the film deals with an extremely hot issue, water.

Dam 999, produced by BizTV Network from the United Arab Emirates and directed by Sohan Roy, is based on the award-winning documentary Dams - The Lethal Water Bombs and the Banqiao dam disaster which claimed 250,000 lives in China in 1975.

Tamil politicians immediately saw a parallel with the Mullaperiyar dam in Kerala. Fears have been exacerbated after the 116-year-old dam developed cracks following mild tremors recently experienced in the region.

While Tamil Nadu, beneficiary of the water released from the dam, continues to demand an increase in the height of the dam, the government of Kerala (the dam, controlled by Tamil Nadu is located in Kerala) believes that the life of several lakhs of people is in danger, and Tamil politicians reacted quickly and forced theatre-owners in Tamil Nadu to boycott Dam 999; it is against the interests of the state, they say.

The dispute has been pending in the Supreme Court for years. Kerala had argued that the agreement on the Mullaperiyar dam giving Tamil Nadu a 999-year lease over the dam was signed during the Raj by Madras Presidency and the Raja of Travancore and is therefore invalid. At the same time, Kerala proposed to construct a new dam, a move which is fiercely opposed by Tamil Nadu 'as it would affect the state's interests'.

If this type of incident can occur between neighbouring states of the same country, one can imagine the conflict which can be generated if a similar dispute arises between rival nations.

In the 1995, Ismail Serageldin, then a senior vice president of World Bank had predicted: "The next World War will be over water."

Was this declaration prophetic? The issue of water conflict is an emotional one which can be studied or analysed, but not wished away.

Today China is the main builder of dams in the world (with India trying to catch up).

Beijing, like New Delhi, can import raw materials to run its economic machine, but what about water, a critical ingredient for agricultural and industrial development? It is impossible to do so.

Chinese engineers are aware that the Third Pole is the water tank of Asia, most of the major rivers having their sources on the high plateau.

If grandiose and seemingly unrealisable projects are being even thought of, it is because the situation is quite desperate and nobody is able to foresee any 'realisable' solution.

Further, there is an important security angle to what is happening on the Third Pole. One example is the breach of 'natural' dams in Tibet in 2000 which led to severe floods and left over a hundred people dead or missing in Arunachal and Himachal Pradesh. It is not difficult to understand that downstream areas are extremely vulnerable to what takes place upstream on the plateau.

The only solution, whether it is for Kerala and Tamil Nadu or China and India, lies in discussing the issue threadbare. 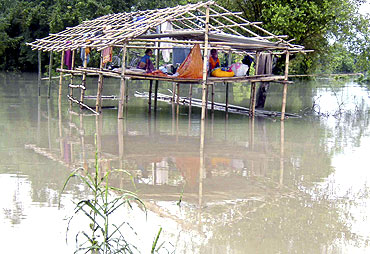 It was the rationale behind the three-day 'International Conference on River Waters Perspectives and Challenges for Asia' organised by the Foundation for Non-violent Alternatives held at the India International Center in New Delhi.

The Foundation thought that the issue of 'water', which could be the source of forthcoming conflicts either within nation-states or between neighouring states, should be discussed in a rational manner.

According to the organisers: 'The conference was convened to offer a common platform for countries in the region, upper riparians, middle riparians and lower riparians, to draw up a sustained plan of action to withstand the potentially disastrous effects of the impending water crisis on the basis of fair equitable utilisation of river waters originating from the Third Pole".

It was probably the first time that scientists and experts from Australia, Bangladesh, Central Asia, China, Finland, France, India, Mekong Region, Myanmar, Nepal, Pakistan, Sweden and the United Kingdom sat together and discussed this hot topic.

Several issues were taken up by the participants: climate change on the Tibetan plateau and its effects on the rivers downstream; technical data available on the Himalayan rivers and glaciers, but also the proposed diversion of the Brahmaputra and the galaxies of mega dams undertaken by China in the Mekong basin and elsewhere in Asia (with India doing its bit in Arunachal). Many representatives of the stake-holders from Thailand, Laos, Myanmar and the North-East actively participated.

China will not divert the Brahmaputra

It is what affirmed a senior scientist from the water and land resources research department in the Chinese Academy of Sciences. He explained: "It is too far away (to take waters more than 2000 km); lifting of water through the plateau is impossible (more than 1000m higher at some points); the project is technically too difficult; it is also too complex in view of the geological conditions and too dangerous with frequent geological disasters (such as landslides and earthquakes) and finally too expensive!"

His conclusions were that there will be no mega dams on the Brahmaputra, but smaller ones with more manageable reservoirs, canals and pipelines (known as run of the river dams). He admitted: "It is sure that there will be some disturbance for the ecosystem, but hydropower is greener compared to coal and sustainable. The key point is to look for the balance point between hydro-energy development and ecological protection."

Many other experts spoke; amongst them, a professor at Cornell University who studied the new and not-well known role of the civil society in China ('water warriors hydropower politics').

Activists from Burma, Mekong basin, Assam and Arunachal Pradesh pointed out the danger of the mega hydro structures and their struggle for more sustainable ways to harness energy.

A senior research fellow from the Institute of Regional Studies in Islamabad told the audience about the Pakistani perspective on 'climate change and sustainable management of Indus basin'. She had to speak on Skype as the Indian home ministry did not clear her visa (so much for the new thaw announced by the Indian foreign minister after his meeting with his pretty Pakistani counterpart!).

Lessons for Kerala and Tamil Nadu 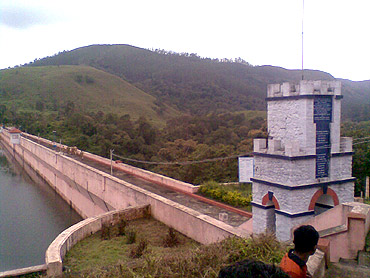 At the end of the conference the following declaration was made: "We recognise the right of the growing economies of the region to develop energy, resources and water for their development needs. However, in view of the unquantified risks -- climate change, economic uncertainty and social and ecological damage -- we call for a pause to reflect on further construction of large dams until all parties take full account of the balance of ecological, economic and human impacts along the entire length of the watercourse and prioritise the rights and interests of all riparian peoples in present and future projects."

One of the resolutions of the conference was: "a pledge to respect and protect the region's rich natural resources, ecological and cultural diversity and to give priority to the equitable sharing of the environmental, social and economic benefits of the region's trans-boundary rivers."

It is, however, regrettable that the delegates did not support the Convention on the Law of the Non-Navigational Uses of International Watercourses, adopted by the UN in 1997 which could serve as a model for bilateral or multilateral agreements with countries neighbouring the Third Pole.

The problem is that nations or states are always ready to 'share' with others living upstream, but their perception changes when the question comes to 'share' with lower-riparians. This is a sad reflection on human nature.

Despite being invited, the Indian press was glaringly absent: a war or an open conflict sells better than a conflict resolution process. But perhaps more than the technical presentations, the fact that all these different experts met on the same platform for three days, exchanging data and ideas is certainly a step forward to avoid future conflicts.

Can Tamil Nadu and Kerala learn from this?

Tailpiece: A senior scholar of the Institute of an influential Chinese think-tank spoke very positively of Sino-Indian relations; India and China should be friends, he said. But when asked why Beijing was not sponsoring a permanent seat for India on the UN Security Council, he replied that China has nothing against India, but India was being clubbed with Japan and Beijing would never accept Japan in the Security Council; therefore China does not support India. This shows the limits of the friendship.