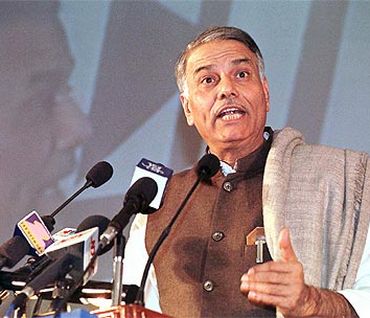 Declaring that the United Progressive Alliance government had lost the moral authority to continue, senior Bharatiya Janata Party leader Yashwant Sinha said the only way the opposition could compel the government to quit was for the National Democratic Alliance MPs to resign en masse.

"That is the only way now," the former finance minister said in an interview with this correspondent. "Parliament will lose its credibility and validity if 190 MPs resign," he said.

"And if we do so, we will be able to go to the people with a new credibility."

Sinha said he had made this suggestion "to Advaniji" even during the monsoon session of Parliament. There were many, he had told L K Advani, who subscribed to his theory that the government had exhausted its mandate and that there should be fresh elections. "Then what are we doing in Parliament? We should quit," he said.

'As a politician, I couldn't join the Anna movement' 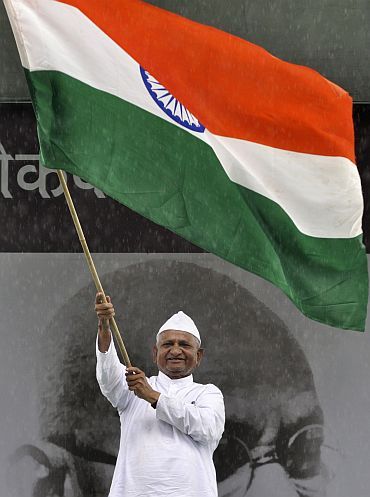 "It was in that context that I had said (in a party meeting during the Anna Hazre agitation) that I wanted to do it," Sinha said.

He had told Advani, "I am openly asking for your permission to resign from the Lok Sabha...Then I could have joined the Anna movement which I could not do as a politician."

The BJP, he said, had not accepted his view at that time.

"But I am happy that the party clarified its position on the Jan Lokpal Bill and our party representative spoke clearly about supporting it."

"This (resignations) is still my preferred option, and I want it to be the party's preferred option for fighting against corruption, (so as) to force the issue," Sinha said.

'A paralysed govt will just continue'

What about the BJP?

"It has really not been discussed formally, but it has been in the air," Sinha replied.

"But some of us feel that we have no reason to be on the defensive, we should be in the forefront of this fight. And that the opposition, preferably the entire NDA, and if not the NDA, then the BJP should quit en masse. It will force the hand of the government."

Governments in India, Sinha said, did not fall on the "question of morality or for non-functioning".

Clearly, he said, the UPA government was not going to go because of corruption or because it had lost the moral right to continue.

Governments had fallen in the past only when they had lost their majority in the Lok Sabha. "This government losing majority is highly unlikely for they do not have a crisis of numbers...unless there is some great catastrophe. So what is it that will force it to go? Otherwise a paralysed government will just continue." 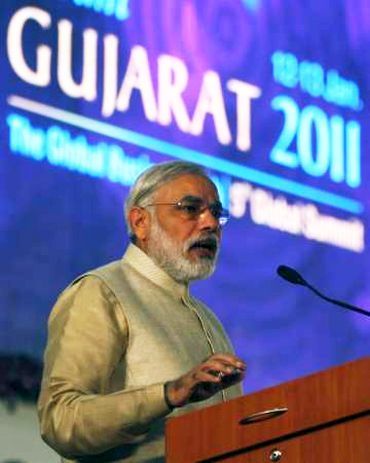 Asked about the war inside the BJP around the issue of its prime ministerial candidate, Sinha reiterated what others have also stated, namely that "the party will decide at the appropriate time".

But, he did not see anything wrong in people jockeying for positions.

"Politics is an area of competing claims," he said, "and when we question why that is happening, we tend to ignore these claims. I would not hold it against anyone in my party or in other parties for jockeying for positions."

On the tug of war inside the BJP between the central leadership and the state satraps, which is now taking place, with two of them, Narendra Modi and B S Yeddyurappa, boycotting the recent meet of the party's national executive and Ramesh Pokhriyal "Nishank" absenting himself on day one, Sinha admitted that the party could have handled the whole affair better.

"By keeping quiet on their absence, we lent grist to the mill," Sinha said. "It should have been explained very forthrightly. If Navratri was the reason for Modi not coming, then he himself should have said so. And if Yedyurappa was not coming, there should have been an explanation. Similarly for Nishank. These were very important people and their not attending (the meet) was bound to be noted. The party should have been ready with a convincing explanation, which did not happen and there were misunderstandings. All that happened was that the national executive meet was overshadowed by the absence of Modi."

'The BJP cannot afford to be selective' 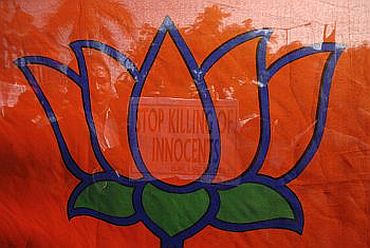 Questioned about Anna Hazare taking a partisan position in the Hissar by-election, where he had come out openly against the Congress candidate, Sinha came to Team Anna's defence.

"I would go by their explanation. They are fighting against corruption and not against any political party. But the Congress has become synonymous with corruption."

On whether Team Anna could have waited till December to see whether the government would stick to its promise of bringing a strong Lokpal Bill in the winter session of Parliament, instead of taking an openly anti-Congress stance now, Sinha said, "I don't know how discussions are going on in the standing committee or about the timeline (for the Bill). I hesitate to pass judgement on Anna jumping the gun."

When asked that there is a view that the BJP takes up issues of corruption selectively. It has, for instance, not spoken much on the KG basin scam which is in all probability a bigger scandal than 2G, Sinha said, "The BJP cannot afford to be selective on something so far out in the public domain. The BJP has not come out very strongly on this or against the civil aviation ministry, on which there are CAG reports, because there have been so many of them which keep hinting at corruption. One is kind of breathless. I hope that is the reason and nothing else because corruption is either an all embracing issue or its nothing. I hope it is by default and not by intent."

'Anna movement to impact UP polls' 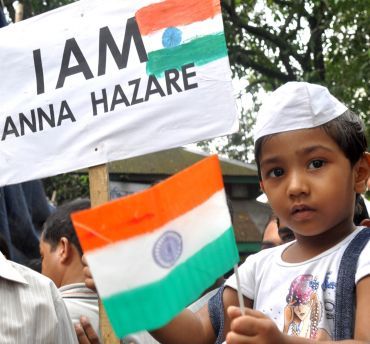 On the political manifestation of the Anna movement, which unlike the JP and VP movements in the past, which had brought together the opposition parties, is directed against the entire political class, Sinha was categorical, "This will peter out. In our kind of democracy, elections will be fought by political parties. But the Congress and the UPA are much more at a disadvantage, despite the anger being directed against the political class. The time will come when people will have to make a distinction. But it will also depend on how opposition parties, and the BJP, put their act together."

When asked how he sees the situation in UP where elections are due, which may decide the future shape of politics, Sinha said, "UP holds the key but it is still a fluid situation. The winning combination could be backward-Muslim-Dalit combination or it could be forward-backward combination which had helped the BJP at the time of Ayodhya."

"In this fluidity, the Congress is losing out. I am convinced that the Anna movement is going to have an impact in UP assembly elections, and whoever takes advantage of it will have the advantage. It won't be the Congress," he said.