'Weapons are not going to solve the problem of terrorism' 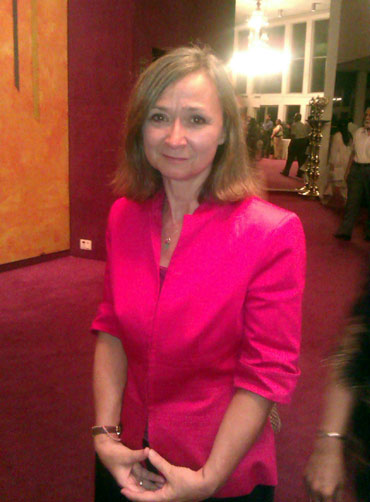 'Where the mind is without fear and the head is held high...' these lines from Nobel Laureate Rabindranath Tagore's poem marked an apt beginning to Transforming Our Way of Living: Remembering 26/11, an event commemorating the third anniversary of the 26/11 terror strikes in Mumbai.

Images of family members of the victims reciting prayers, which flashed across screens at Mumbai's National Centre for Performing Arts' Tata Auditorium, set a sombre tone.

Kia Scherr, who lost her husband Alan and 13-year-old daughter Naomi in the attack, read out a poem, My Mumbai Story In Haiku, recounting the tragedy.

She bore no malice to anyone, Scherr told the audience, adding that she wanted people "to rise from the ashes of darkness to the light of love".

Julio Ribeiro, former Mumbai police commissioner and chairman of the Public Concern for Governance Trust, began his address by explaining the nexus between corruption and terrorism.

'People ask why is the PCGT involved in this commemoration event? What is the co-relation between commemorating 26/11 and corruption? If governance improves and corruption is reduced, the police force will be much more professional,' he explained.

"People say the police will become better if we acquire weapons. Weapons are not going to solve the problem of terrorism. An attack like 26/11 was a fidayeen attack and can be countered by good information, which was there, but not properly disseminated. Police reforms will take place only by reducing politicisation and this is what people must understand. It is the mindset that needs to change,' he added.

'The media is a double-edged weapon' 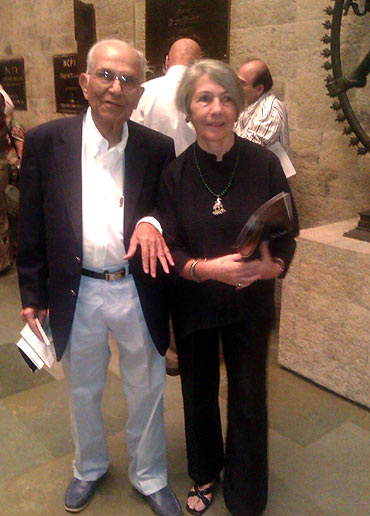 Another speaker, Vallabh Bhansali, an investment banker, stated that an apt expression to describe the 26/11 carnage was "madness".

"It was sheer madness. As a businessman, I have wondered about this madness and obsessive-ness, whether it is success or growth or the methods to achieve success," he said.

"In the 1993 riots, 26/11 and the recent bomb blasts in Mumbai, somewhere the hand of money played an important part. We need to pause to think about the madness within us. When growth gives way to purpose, we can make a great difference," he said.

Kumar Ketkar, chief editor of Marathi daily Loksatta, explained how the media, which was criticised for its coverage of the attacks, can play an important part in transforming lives.

He said, "The media can be a huge asset as well as a threat to society. It is a double-edged weapon. We have to blunt one side of the weapon and sharpen the other."

Karkare spoke about how meditation had helped her cope with grief. Another victim, a flower seller whose husband died of bullet injuries, said her mission in life now was to educate her children.

Narayan Varma, co-coordinator of the event and joint managing trustee of PCGT, told rediff.com, "The theme of the event is how to take the exercise of securing Mumbai forward. We want to ensure that citizens are secure and safety is established."

'The pain in my heart will always remain' 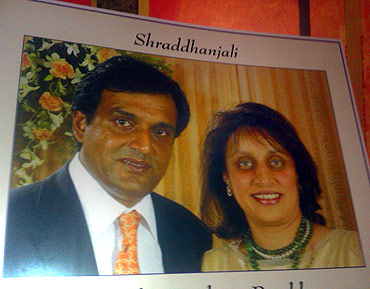 S J Parekh, chairman of United Shippers, who lost his son Sunil and daughter-in-law Reshma in the attack on the Oberoi-Trident Hotel, said he was taking his life forward because of his two grandchildren.

"The pain in my heart will always remain, but the sad part is that the government is sleeping and doing nothing to avoid such incidents. That is why we are trying to keep the movement alive so that the government gets out of its slumber and others do not have to face the situation we are in," he said.

Scherr, who co-founded the US-based non-profit organisation 'One Life Alliance' on the first anniversary of the attack, had a different take on people complaining about government apathy.

'Be the change you wish to see' 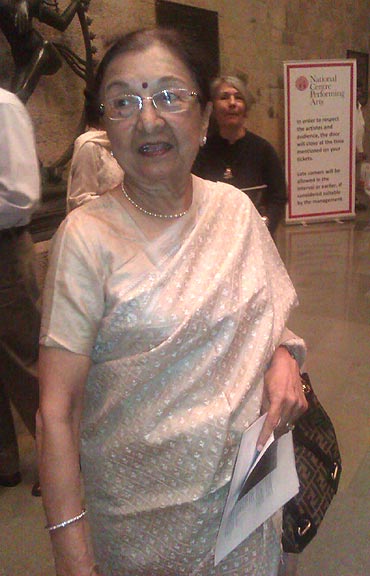 She quoted Mahatma Gandhi and said, "Be the change you wish to see in the world," adding, "Through satyagraha and searching your soul, we can find ways to build our inner strength and gradually increase the outer strength to build bridges between people and avoid violence."

Many of those who attended the event had lost their loved ones. Many others had come to express their solidarity with the cause and pay their respects.

Nalini Narsee, whose son had a narrow escape during the 9/11 attacks in New York, wanted to be there for victims of similar terror attacks.

Shweta Vakil, who runs a charity, said she was "disappointed to see few youngsters" at the event, adding that young people should come out in large numbers and express their support for such initiatives.