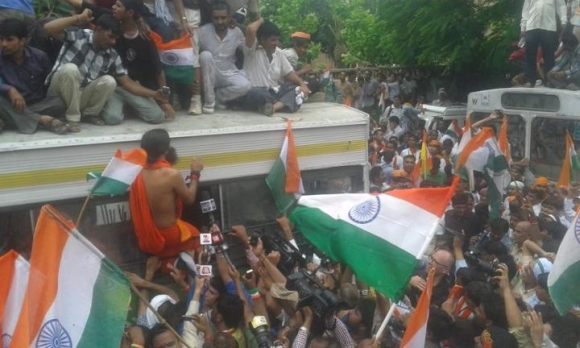 Yoga guru Baba Ramdev was on Monday arrested along with his supporters when they tried to march towards Parliament on an anti-Congress plank demanding immediate steps to bring back black money and to protest against corruption.

Ramdev was arrested near the Ranjit Singh flyover, about 3 km away from Parliament, under Delhi Police Act provisions for preventive custody when he ordered thousands of his followers to march towards Parliament House.

With the government ignoring his protest and refusing to engage with him, Ramdev had been threatening to announce his future strategy since Saturday.

Police had marshalled a number of buses to take away the yoga guru and his supporters from near the Ramlila Maidan in central Delhi, the venue of his fast protest since Thursday after BJP President Nitin Gadkari and JD-U chief Sharad Yadav addressed the gathering on Monday morning extending support to him.

"Delhi Police is a puppet in the hands of the central government. We will not do anything that disrupts peace. We wanted to march towards Parliament in a peaceful manner to make our voices heard. But they are detaining us," he told his supporters, asking them not to court arrest. "Our intention is not to disrupt peace. We will cooperate with the police and go according to the law. We have respect to the law of the land," Ramdev said, before he was taken away by police from atop his vehicle to a bus. As his supporters blocked the entire stretch of the flyover, Ramdev popped out of the bus window and appealed to them to make way for the vehicle to move.

Delhi Police officials said the yoga guru and his supporters are being taken to Bawana on the outskirts of the capital.

Holding the national tricolour, Ramdev hopped on to a open vehicle from outside the Ramlila Maidan and began the march at 1:15 pm. He was soon joined by thousands of his supporters.

"Let us start the march to Parliament. Our march is not to gherao Parliament, but to agitate. None of our volunteers should indulge in violence," he told his supporters before beginning his march.

Ten minutes into the march the cavalcade was stopped by Delhi Police near the flyover, saying that they do not have permission to march. 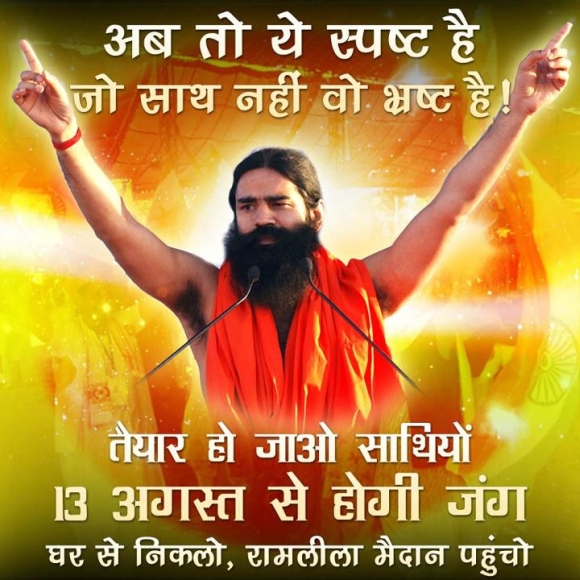 Ramdev announced this morning that he and his supporters would march towards Parliament and hold an agitation outside the complex.

"The government has become completely deaf. We have to make them hear us. Now our protest will be outside Parliament. We are not talking about gherao," Ramdev said while addressing his supporters in the morning.

"Lok Sabha polls will be in 2014 and 99 per cent could be in 2013. This protest is to ensure that no dishonest person enters Parliament. Such people should be boycotted. We do not have a political agenda," he said.

Earlier, Gadkari and Yadav attacked the Congress and supported Ramdev who asked people to throw out the UPA government accusing it of not acting against corruption and black money.

Gadkari pledged his party's "full support" to the yoga guru's agitation against black money and launched a blistering attack on the Congress-led UPA Government on issues like corruption and black money.