Ram temple, English-bashing: BJP taking us back to 1998! 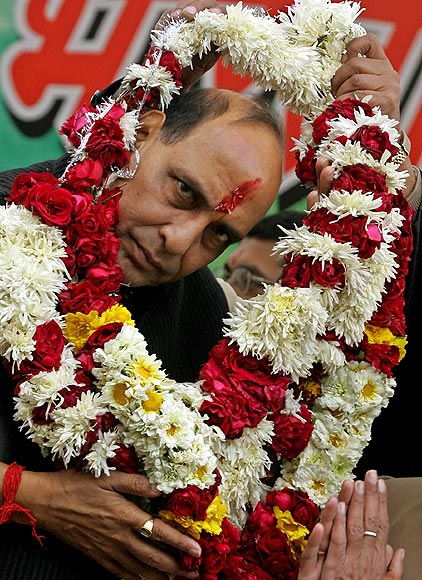 Amit Shah declared the party would build a ‘grand temple’ in Ayodhya. The gazillion new voters born after December 6, 1992, Googled ‘Ayodhya temple’ and decided that the Bharatiya Janata Party is the party of the future

Rajnath Singh, president of the Bharatiya Janata Party -- hailed of late for being intelligent and forward-looking -- on Friday reportedly went off on a little rant about language.

“The English language,” said Singh, whose understanding of politics is matched only by his knowledge of history, “has caused a great loss to the country.” He went on to add mournfully that “we” are losing our culture, since “there are hardly any people who speak Sanskrit now.”

Of course, for a certain definition of “people” which Singh clearly does not share, there were always “hardly any people” speaking Sanskrit. What Sheldon Pollock calls the sanctified language’s “sacerdotal isolation” meant that it was effectively forbidden to those not from the twice-born castes. Ah, the good old days.

But the fact that the BJP’s president worries publicly about the spread of English is a point worth noting. 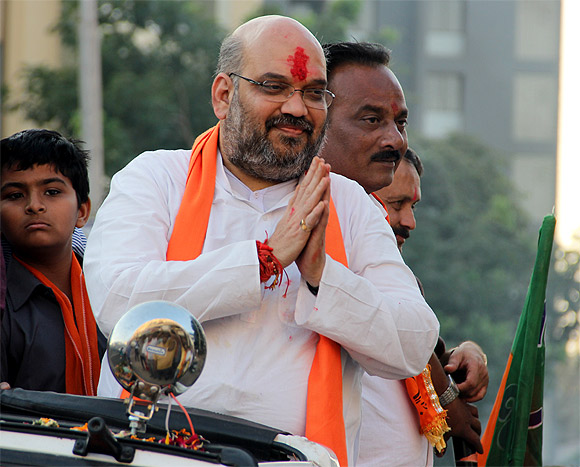 After all, even the Samajwadi Party, the Hindi supremacist stronghold of Lohia-ite xenophobia, has quietly diluted its opposition to English in the past, correctly noting that thunderous denunciations of this malign tongue are less likely to be rewarded by voters than, say, a promise to send everyone to English conversation classes. But Rajnath Singh, who is convinced that the BJP is ek dhakka away from sweeping Uttar Pradesh, is merely giving voice to the method by which India’s reformist right will seize power in 2014: by going back in time as far as possible.

Thus we have Amit Shah -- who has not yet been convicted by any court of anything, as his friends will repeatedly remind you -- going to Ayodhya in his capacity as the BJP’s general secretary-in-charge of UP, and declaring that the party would build a “grand temple” there.

The gazillion new voters aged 18-21 and born after December 6, 1992, immediately Googled ‘Ayodhya temple’ on their smartphones and decided instantly that the BJP is the party of the future.

And thus we have Narendra Modi -- who has not yet been convicted by any court of anything, as he himself will repeatedly tell you -- telling Reuters that he is a Hindu nationalist, since he was born Hindu, is a nationalist, and really that’s all it takes, isn’t it. 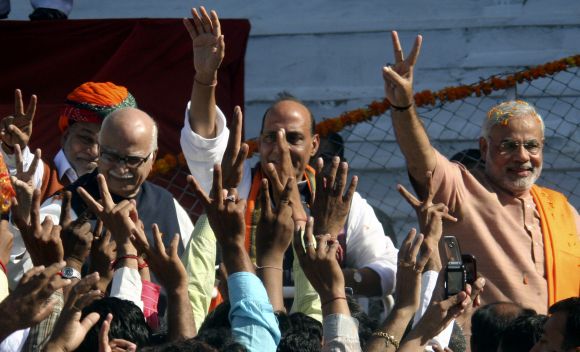 Immediately, hoardings went up all over Mumbai with Modi’s face and the statement “I am Hindu Nationalist” in English and Marathi, to correct the common misapprehension that he was a Muslim or perhaps a Parsi nationalist. In a magnanimous concession to humanity, Modi also admitted dead puppies made him feel bad.

Later, Modi informed startled students in Pune that a religious organisation named the Shivgiri Math was responsible for Kerala’s literacy, which is presumably why no Muslims and Christians in Kerala can read.

I look forward to the much-needed tweaks to the Right to Education policy under Prime Minister Narendra Modi, which will apparently involve “people” going to temples and learning Sanskrit. As long as the temples are privately run, with minimal government interference.

What on earth is going on with the BJP? Everyone agrees the Congress is so shaky that an Energizer Bunny squeaking “scams, scams, scams” would probably get elected prime minister and be hailed as more communicative than Manmohan Singh. 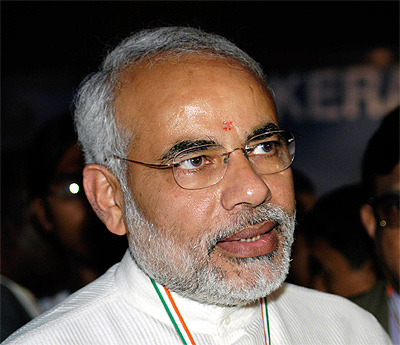 Why, then, this concerted lurch to the right? Is it, as some claim, the price for the Rashtriya Swayamsevak Sangh support for Narendra Modi, who has not exactly been Nagpur’s favourite swayamsevak of late?

I would go for a less conspiratorial answer. If a Modi-led BJP is to come to power, the argument runs, Uttar Pradesh must be won. Since 1998, when it won 57 of UP’s 85 Lok Sabha seats, the party has been steadily sliding there, as the state’s elections turned increasingly into a contest between the SP and the Bahujan Samaj Party.

And, since Hindi heartland politics also requires you to do complex algebra involving caste support -- algebra, not arithmetic, since nobody actually knows how any caste votes -- here are the relevant equations.

Over the past decade, the “floating vote” in UP has been, it is claimed, the upper castes, who abandoned the BJP and to give either the SP or the BSP absolute majorities in assembly elections (except for the 2009 general elections, when the Congress surprised everybody). 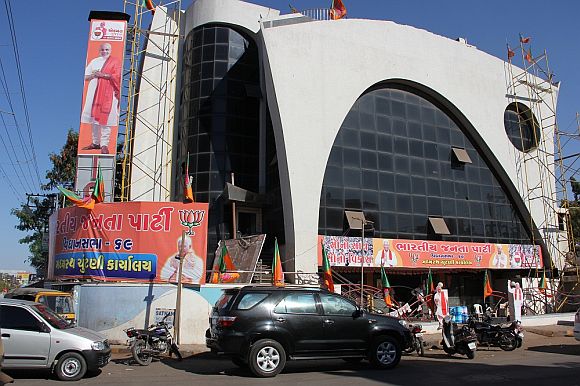 The 1990s BJP's winning coalition in UP, thus, was these upper castes, combined with a section of the OBCs who voted for the party of Kalyan Singh. Game plan: get back the upper castes, who are believed to like Sanskrit and temples and dislike Muslims and puppies; and send out not-so-subtle reminders that Modi, too, is an OBC.

It was possible, in those long-ago days of a decade or so ago, to say one thing for one set of voters and something else for another set. That is no longer the case; media markets and coverage have converged and expanded respectively.

Thus, the BJP’s attempts at damage control, with grumbles that concern about all this religious stuff is over-hyped, and calls to friendly journalists who then report that “Modi is unhappy about the hoardings”.

You see, those expecting the BJP to be all growth and development and caste-and-creed-no-bar classical liberalism will, naturally, be a little put off by it saying instead that education policy is about Maths, not maths.

It was Varun Gandhi -- who has not been convicted by any court -- that first thought you can be a philosopher-poet in Khan Market, and a hand-chopping warrior in Pilibhit.

A schizophrenic party following the lead of somebody named Gandhi is, frankly, not as much of a change as we were promised.