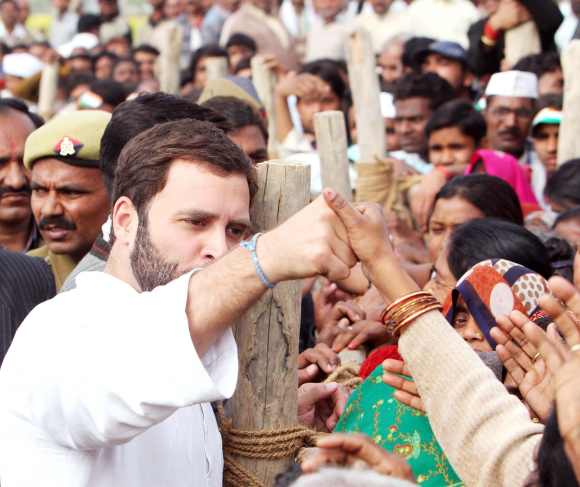 Two powerful businessmen ganged up against the Congress. Starling revelations from a source close to Rahul Gandhi.

"Rahul Gandhi says even if we get 20 seats, my deep conviction for Uttar Pradesh won't go away. Rahul Gandhi is somebody who can take the long-term view. Once he takes the view he sticks to it." says a source close to the Congress general secretary speaking off the record to Rediff.com

He gives us an exclusive insight into Rahul's mind and also shares light on how RG, as the Congress leader is known in his inner circle, will take the stunning defeat in his stride.

In a spirited defence, the source who is based in New Delhi, says, "The Congress would be a principled Opposition in Uttar Pradesh."

While speaking to Rediff.com on the eve of counting, he tried to build a caveat for Tuesday's defeat. He said the 2012 election would build up the fundamentals for a future Congress government in Lucknow.

It is clear now that the Congress has not performed in proportion to the hype that was built around Rahul Gandhi.

When asked why the mood in Uttar Pradesh had changed after December 2011 when Rahul's campaign was picking up and surveys after surveys showed that Rahul's image was building up, the source says, "Perception was changed through the media."

In a surprising response, he feels corporate houses with huge financial interests in Uttar Pradesh may have been threatened for adopting corrupt practices during Mayawati's rule. They may have ganged up to boost the regional parties and hit the Congress's efforts, he said.

"Quite a lot of resources of vested interests in Uttar Pradesh have gone towards building perception," he adds. "You must understand that on the eve of election results there is huge uncertainty. There are major fears so corporate houses -- two major ones -- have pitched in. One deals in chit funds and one is into infrastructure."

"They want to be on the right side of the establishment," the Congress insider says. "To avoid huge problems staring at them, two regional parties (the Samajwadi Party and the Bahujan Samaj Party) came together. They met secretly in Chattarpur. A businessman based in New Delhi facilitated the clandestine meet."

"There is so much uncertainty," he adds. "Things got really worrying for them when they saw that the Congress is gaining ground. The possibility of a change of establishment in Lucknow worried them. Lots of people who do business against the established norms had reason to worry. There was nervousness all around." 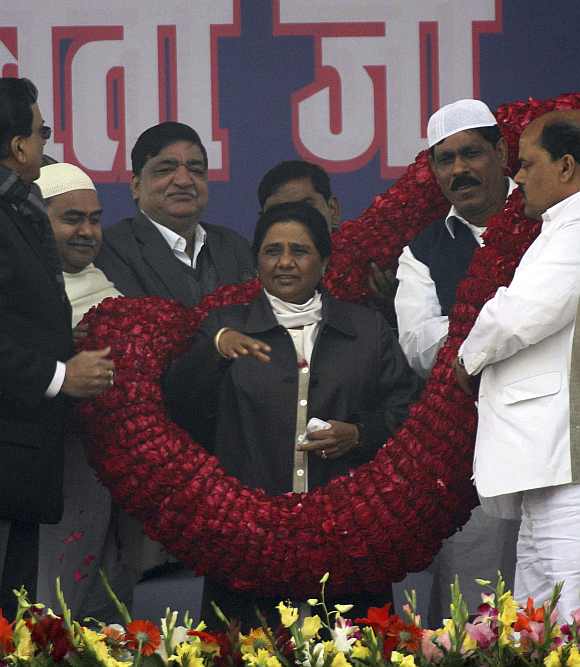 Discussing Mayawati's regime, the Congress insider close to Rahul Gandhi says, "The unmistakable truth about the BSP is that a God-given opportunity given to them in 2007 was thrown away. (BSP founder) Kanshi Ram used to talk about poorna bahumat sarkar (government with a huge majority) to realise the dreams of the downtrodden classes. But when power came, the Dalits saw only disillusionment."

"If Mayawati had done well, why would veterans of her party like Balihari Babu, Babu Ramadin, Baburam Kushwaha and Fateh Bahadur and others leave her?" he asks.

Blasting Mayawati's corruption, he says, "Instead of utilising five years of stable rule, she monetised power in her favour by misusing funds of the National Rural Health Mission, the Jawaharlal Nehru National Urban Renewal Mission and through transfers and postings. She turned government schemes into a money-making business."

In view of Mayawati's failures in governance, he adds, "The Congress gave a clear signal by offering a third pillar beyond the two regional parties. The Congress demonstrated energy to the people and sent the message that it wants to deliver. The Congress clearly aimed to represent the people who were marginalised."

He points out that if one looks at the last two months of the campaign in Uttar Pradesh there remains no doubt that Rahul Gandhi has set the agenda for the 2012 election. "It is the Congress that fought issues like the atrocities of Lakhimpur Kheri, the land scam in Bhatta Parsaul and the Bundelkhand drought. We raised our voice against 40 per cent migration out of Bundekhand. We fought against the land given away to (liquor baron) Ponty Chaddha and Jaypee Industries on the Yamuna Expressway."

He argues again and again that, "The Congress demonstrated political commitment. We fought the people's battles, be it about atrocities on the Dalits or on issue of misuse of funds."

'If Congress gets 50 seats, we will transit from irrelevant to relevant' 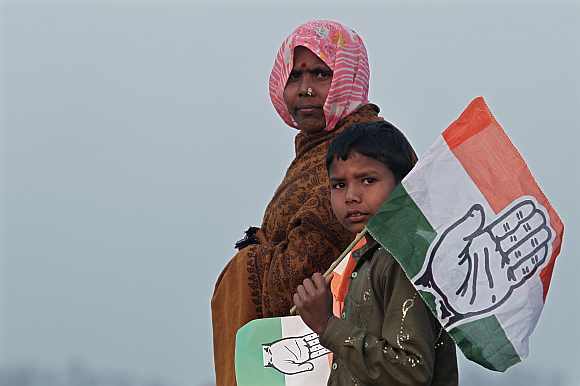 When told that the Congress is likely to fare badly despite the gigantic efforts, the Rahul insider argues, "We have 5 percent of the MLAs right now and just 8 to 9 percent vote share. You must remember we have begun here."

Those who criticise Rahul Gandhi, he says, should know that the Congress party was non-existent in UP when he entered state politics.

"In the last Lok Sabha election we could not even find 80 candidates. We fielded 65, 67 candidates only. Even if we win fewer seats, the Congress organisation is now restructured and revamped."

When asked why Rahul Gandhi shifted from a development plank to a casteist and communal plank, he disagrees. "We saw that the Muslims and the Kurmis are not represented in the power-set up in UP. We tried to give them representation in proportion to their population. Is it castesim politics if you advocate representation for the marginal people?"

Setting the benchmark for Rahul Gandhi's performance on Tuesday, he says, "Even if we get around 50 seats, we will transit from irrelevant to relevant."

When asked what failed Rahul Gandhi in Uttar Pradesh, he says, "If you don't win, you will learn! If you win, you don't. We are confident that the Congress will build a base to regain the state in future."

He then confesses the real mistakes Rahul made. "We made many mistakes. We made certain choices. RG thought of rebuilding the Youth Congress first. Somebody could argue that the time put in UP was not enough. UP should have been given full time attention. We thought of strengthening the foundation of the organisation... it is the rebirth of the Congress, you see."

Then, he adds significantly, "Somebody might say he should have been declared leader of the party in UP."

'RG took the bull by the horns in Uttar Pradesh' 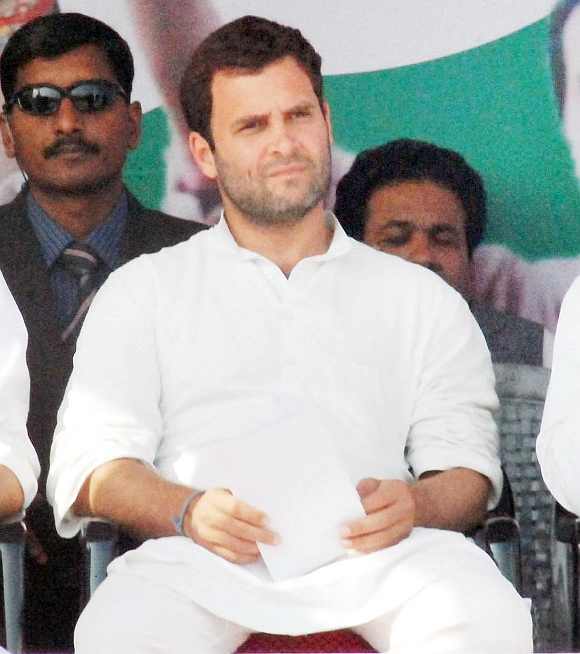 The Rahul insider ends on a hopeful note that, "We will be doubling or tripling our position this time. RG says the time spent in New Delhi is time wasted. He is a kind of focused leader. He likes being in the tehsils than in Parliament."

When asked what gave the Rahul group hope, he says, "Post Atal Bihari Vajpayee and Kalyan Singh, the BJP could never recover. Rajnath Singh may not be able to get elected from Ghaziabad again. As you know, the Samajwadi Party has been rejected three times. They have been tried, tested and rejected. The number of accusations they have faced is known."

"Yes, there is generational shift in the SP that is repairing its image and the damage done in the past," he adds. "Also, we saw that in the villages the Jatavs are opposing the Yadavs fiercely. The central sentiment of the social structure is reflected in the voting."

When asked if Rahul has any regrets, he says, "There is no risk in taking up a difficult challenge. It is in his element. In the entire Congress party nobody wanted to take up the UP challenge...no second person in the Congress was willing! RG took the bull by the horns in Uttar Pradesh."

"He is somebody who is willing to solve problems. He knew it may or may not get the majority. But he wanted to fight this battle."