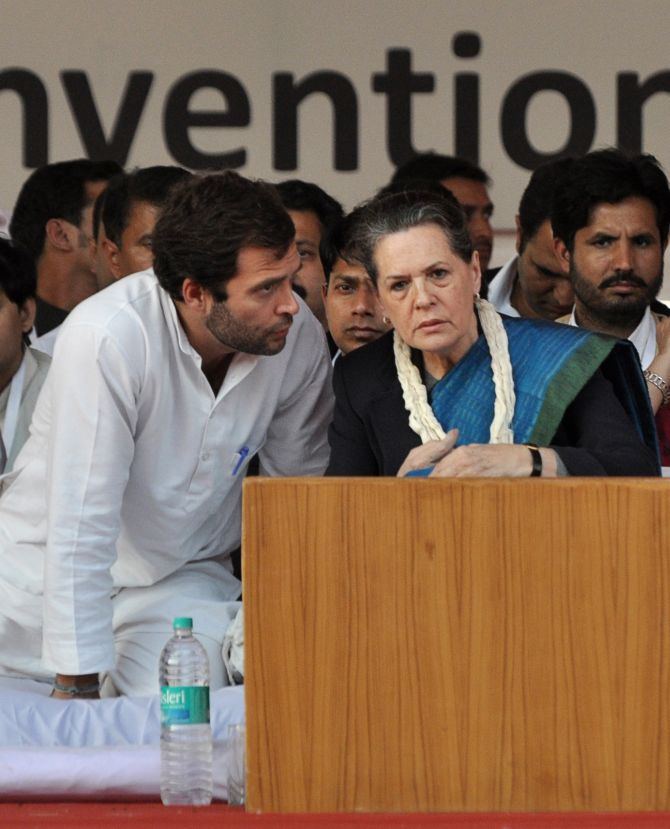 Is Rahul Gandhi busy with interior decoration while his house is on fire? Can Sonia Gandhi’s ‘pro-poor’ image counter Narendra Modi’s ‘pro-development’ image? In the first of a two-part series that focuses on India’s two biggest political parties, Sheela Bhatt analyses the Congress’s strengths, weaknesses, opportunities and threats.

Rahul Gandhi, the Congress vice president, is focused reorganising the messy party structure. He wants to establish a coordination system between party leaders and workers. He wants permanent formulas and standard operating procedures in party activities so that individuals cannot manipulate decisions for personal gains or vested/political interest.

The commercialisation of powerful political party positions and political blackmailing of various kinds has weakened the Congress from the inside in the last few years. Rahul is up against vulgar lust of power among district, state and Delhi-based old foxes.

His critics say Rahul lacks priority and doesn’t recognise the urgency of the times. When the house is on fire, his detractors say, you can't focus on the interior decoration.

Meanwhile, Gujarat Chief Minister Narendra Modi is breathing down the neck of the Gandhi family and the Congress. Paradoxically, the Modi factor is also helping the Congress to shift focus from the scams and failures of governance -- to portraying the coming big fight as a battle of secularism versus communalism.

As the country inches towards elections, here's a SWOT analysis of India’s ruling party. 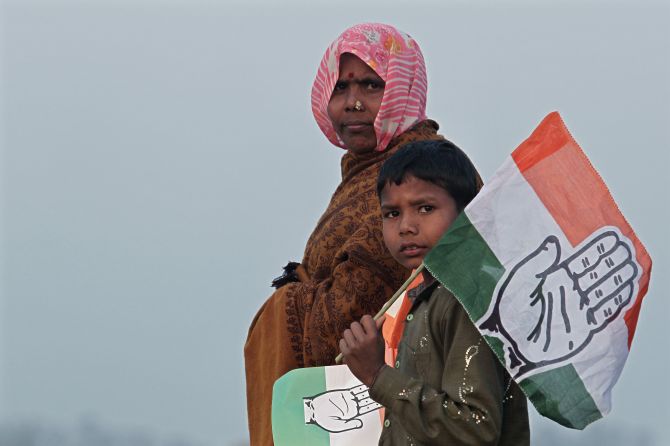 1. The Congress is in power, and thus has control over leverages of power.

2. The party’s brand recognition amongst Dalits, minorities, and the poor -- the biggest block of active voters in India.

3. The internal bickering in the party don’t make headlines as much as the BJP’s internal feuds. For instance, Prime Minister Dr Manmohan Singh didn't put enough pressure on bureaucrats to allow Finance Minister P Chidambaram to decrease interest rates. Digvijay Singh’s politics is completely rubbished by Janardan Dwivedi. But such things don't hit the headlines as much as, say, Modi versus Sushma Swaraj.

5. Fear of Modi among minorities and intense dislike for him among secular and left-leaning Indians.

6. Better allied strength. The Congress will have more allies if it is neck and neck with the BJP in winning seats. Congress can halt Modi’s march by making clever alliances in Uttar Pradesh, Andhra Pradesh, Tamil Nadu and Bihar. But for that Rahul Gandhi and senior Congress party men will have to shelve ego and arrogance.

7. If Rahul can up the game -- read be more masculine, politically speaking -- a certain section of voters may find him less risky than Modi, who comes with the baggage of not just the 2002 riots but an image of a heavy-handed, ‘my way or the highway’ leader.

8. Rahul has a better pro-poor image than Modi. It is difficult to find even a photograph of the Gujarat chief minister, seen as a development messiah by many, with the poorest Indians, who number more than 30 crores.

9. The Muslim-Dalit factor. While Muslims will make or break the BJP’s fortune in some 60 constituencies, in about 80 constituencies Dalits and tribals are significant enough to make India’s leaders stick to the middle path between market-driven and socialist economics.

10. The Sonia factor. The Congress’s only hope for the 2014 election is that Sonia Gandhi’s message that she has pushed ‘pro-poor’ legislation --  like food security bill, direct cash transfer scheme, etc -- without bothering about the economy’s bottom lines, will go down well with India’s poor voters. 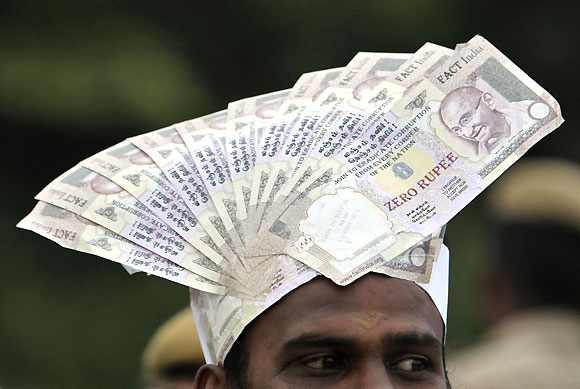 1. Lack of leadership, vision. Sonia, Rahul and Prime Minister Singh are figuratively invisible to everyone including the common man. The India Story soured before fruition, and the Congress failed to capitalise on the global spotlight on the country. The party leaders parrot lines about inclusive growth but scams and bad governance have washed away the moral high ground.

2. The nose-diving economy. Harrowing price-rise -- petrol, onion and dollar prices are almost the same, and everyone from the upper middle class down are thinking five times before buying anything -- is the Congress’s biggest weakness today. The party will be held directly responsible for loss of confidence in the market as well. The less said about the rupee, the better. Here is a sure-shot reason to lose the election.

3. Failure in governance. Both the United Progressive Alliance 1 and UPA II didn't correct the basic flaws of the Indian governance system, and it will be a major factor if the Congress is defeated. Aadhar and cash transfer schemes are examples of half-hearted, incomplete measures whose final shape will be known or can be assessed only in 2014 later. Advantage Modi.

4. Late shifting of power centre. The transition from Sonia to Rahul should have been carried out at least a year earlier. It’s dangerous to push such a vital exercise so close to an election. Political parties are all about political leadership. The internal transition of power should have been a peace-time process, not war-time activity.

5. Lack of empathy with the people. From Manish Tiwari to Renuka Chowdhary, none of the Congress’s spokespersons speak the people’s language. Tiwari’s recent assertion that journalists should need some kind of license speaks volumes about the Congress’s understanding of journalism and journalists. There is a pathetic paucity of phrases and idioms to reach out to the people though the media. Digvijay Singh is the Congress’s one-man army in the media war, but he is too predictable. The minorities are divided on his sincerity, despite his constant lashing out at the BJP and the Rashtriya Swayamsevak Sangh. “Digvijay’s remarks in so-called defence of minorities is actually provoking Hindu communalism; we oppose it,” says Shahid Siddiqui, editor of Nai Dunia.

6. Corruption. The charge sticks. It’s true that many BJP leaders are equally corrupt, but they are not in power so they are not under as much scrutiny as the Congress is. The scams of the last nine years, including 2G, coalgate and Robert Vadra land deals, will haunt Congress for a long time to come.

8. Policy paralysis. Telangana, US-India relationship, India-Pakistan ties, foreign investment, food security, appointments and transfers of top bureaucrats -- all major policy decisions are in bits and pieces. It is evidence that the Congress is as much a divided house as the BJP, though the BJP’s bickering is better known to the public. Unlike in the BJP, the dissenting Congress leaders have inherent limitations: Only the Gandhis matter in the final decision-making process. The BJP’s dissenters have much more power.

9. Floating voters. The most important electoral block for the last few elections, the floating voter, is unlikely to drift towards the Congress. These voters don’t have steadfast loyalty to any party. BJP leader Arun Jaitley calls them Indians “with a sense of fairness” who want to teach the political parties a lesson through the ballot box.

10. Big guns turning out damp squibs. Leaders like the economist prime minister, the ‘honest’ Defence Minister A K Antony have been exposed as ineffective. They could have emerged as heroes, but the party has failed to project them and they have also failed to live up to expectations. 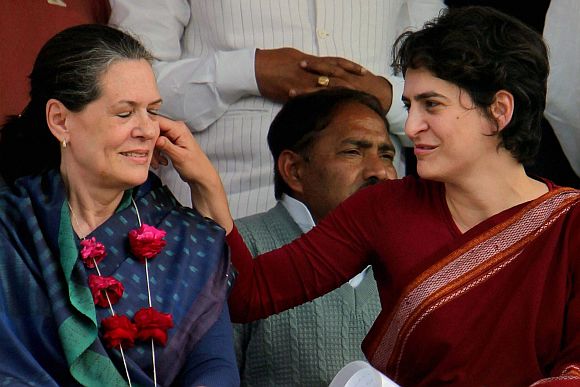 1. Secularism. There is a huge constituency that will follow the Congress if it sticks by secular principles. More than six decades after the Jana Sangh’s birth, there are hundreds of thousands of Muslim voter-dominated booths where the BJP doesn’t even do any election propaganda. The Congress needs to make its plank of secularism more voter-friendly by getting people who can talk about it in the common man’s language, without resorting to highfalutin.

2. Pakistan. The Congress is failing in finding the language and the intention to deal with Islamabad. The Congress is unable to see the opportunity in the people’s sensitivity to Pakistan policy. If it can find a way to deal with Pakistan that can resonate with the common man’s angst, it will have scored a major victory.

3. Narendra Modi. The Gujarat chief minister’s great gamble for power in 2014 has given the Congress a genuine headache and a genuine opportunity. The Congress can grab the opportunity or go down with overkill. As of now, it seems the Modi-bashing on overdrive has resulted in giving Modi the media space he desperately wants.

4. Priyanka Gandhi. She remains an unexplored opportunity for the Congress. Even when Rahul Gandhi took his baby steps in politics years ago, the Congress rank and file wanted Priyanka instead.

5. Poll tickets. The district-level Congress workers are screaming for rooftops that there should be no corruption in selection of candidates. The likes of Kamal Nath who have bungled in ticket distribution should be kept away. If the party can clean up its ticket-giving act, it will help the Congress. Although it's difficult to woo them back given the depth of the corruption, the Congress cannot ignore the floating voters, who Modi is targeting aggressively. 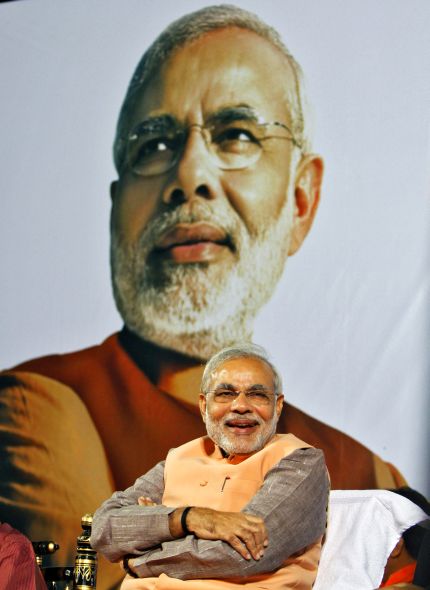 1. Manipulation. Over-use of the Central Bureau of Investigation or any kind of political dirty tricks will rebound. The Congress should understand that this is a new India and a new Indian media. Manipulation of institutions doesn't remain a secret these days.

2. The danger of the middle ground. The Congress party can sink in the ground between Muslim appeasement and soft Hindutva.

3. ChiPak factor.China and Pakistan’s moves -- anyone notice how Chinese are intruding into Arunachal while Pakistanis are violating ceasefire in tandem? -- can take their toll.

4. United BJP. The RSS is now firmly behind Modi and the BJP will fall in line. A united BJP can do much more damage to the Congress.

5. The anti-Congress sentiment. Whether it's a wave or an under-current in favour of Modi is open to interpretation, but it is undeniable that many people have started believing that 2014 is not just about Modi but also about price rise, corruption and lack of leadership and governance. The anti-Congress vote will be more powerful than the pro-BJP vote.

6. Modi’s masala. The Gujarat chief minister’s moves are making Rahul Gandhi's big plans for 2014 election look bland. Modi is focused completely on Delhi. He also enjoys a kind of immunity -- try saying 2002 in front of them -- among his supporters. Maybe it’s too late to ‘expose’ Modi or his action/inaction in Gujarat; perhaps the only way out for the Congress is to counter his charisma with visionary ideas.

7. Anti-middle-class bias. Once upon a time, Prime Minister Singh was the Congress’s icon for the middle class. He has lost sheen. Now, the Congress has nobody to motivate or inspire the rapidly growing middle class.

Next week, the pros and cons of the BJP