The Legislature committee probing the porngate episode on Thursday decided to summon three members of Legislative Assembly who had to quit as ministers following the scandal, even as its decision to first question the television channels which aired the footage has sparked a controversy.

Two senior journalists, representing different news channels, appeared before the panel on Wednesday and on Thursday after summons and were asked questions, a move that evoked a sharp reaction from the mainstream media which saw it as a ploy to train guns on it, rather than focusing on the "accused".

Asked by reporters if a decision has been taken to summon the three MLAs -- Lakshman S Savadi, C C Patil and J Krishna Palemar --, the head of the committee, Srishailappa Bidadur, said after Thursday's sitting, "That has been decided and you will come to know later on."

The committee would hold its next meeting on March 8; he said, but refused to say as to when the three, who have already sent written replies to notices sent by the Speaker K G Bopaiah on the episode, would depose before the panel. After receiving the responses, the Speaker handed over the probe to this committee.

The Speaker constituted a seven-member House panel, comprising four members from the Bharatiya Janata Party, two from the Congress and one from Janata Dal-Secular, to probe the episode, but the two opposition parties have boycotted the committee, reducing it to a ruling-party-only panel.

'They are trying to cover up things' 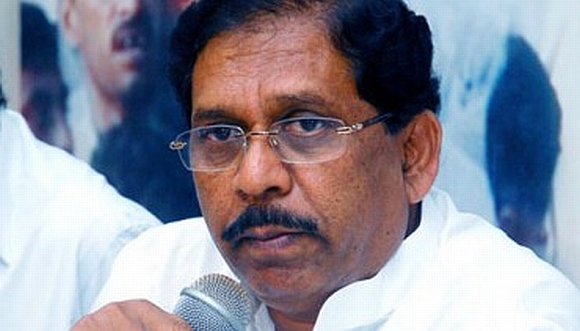 "They are trying to cover up things", Parameshwara told PTI. The representatives of the two news channels were primarily asked five questions.

They include: Is it proper to capture indecent/unnecessary things by cameras though you have obtained permission to report the proceedings of the Assembly; what's the intention behind it; whether the Speaker's permission was taken to telecast visuals which are unparliamentary; whether they do not know that telecasting such things are violative of certain sections of the Vidhan Soudha press gallery rules.

Bidadur said the committee would submit its report by March 13 as per the stipulated period set by the Speaker but indicated that there might a week's delay.

Sources in the news channel, which appeared before the panel, said it forwarded the argument that it has not committed anything wrong and the clips had been "blurred" while being telecast.