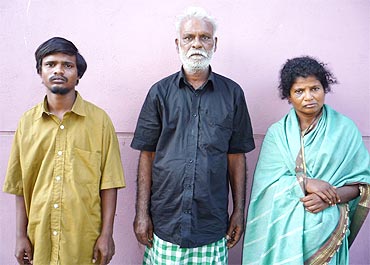 At least 50 women in Tamil Nadu were in for a pleasant surprise last week when the cops called them and said, "You have complained of theft of your jewellery. We have recovered it, please come to the police station and collect your lost belongings."

The call came after the police accidentally stumbled on a family who had been involved in many theft cases that rocked the southern districts of Tamil Nadu. The lucky 50 women include four from Cuddalore district, four from Tanjore, two from Kanyakumari, 28 from Tuticorin and 12 from Tirunelveli.

One evening a man named Dinesh Kumar turned up at the Tirunelveli Superintendent of Police's camp office, insisting that he wanted to meet the SP to brief him about an event.

Dinesh Kumar told Superintendent of Police Asra Garg, "My in-laws are threatening me, I am scared. They behave like criminals".

Recently, Kumar married a law student Thangamari. Though he told the police that his in-laws were criminals, he could not explain what they were actually doing. Acting on a gut instinct, the top cop had the in-laws house at Ramayanpatti near Manur raided .

What followed was literally a treasure trove. At least two kg of gold, documents that showed Rs 5 crore worth of property and three luxury vehicles were seized. The family head Chelliah, his wife Muthumari and adopted son Harikrishnan were arrested. They had a real estate agency in Ramayanpatti, two computer centres in Virudhunagar and Madurai and a mobile phone shop in Courtallam.

While one daughter Thangamari is studying law at the Tirunelveli Government Law College, another one, Muthulakshmi is studying medicine in Russia.

Police up the ante 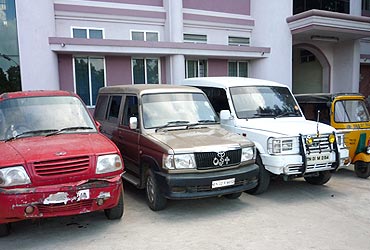 Sustained interrogation revealed that they had been duping and robbing people for the last 40 years. The family targeted mostly temples -- during festivals in the three states of Tamil Nadu, Andhra Pradesh and Karnataka.

The modus operandi was unique. Women would carry very sharp blades with which they cut the gold chains of devotees. The men would wait in their cars to make quick get away. They had used this modus operandi in every district in the state and a few in the neighbouring states.

They are Kattunaickers, a schedule tribe in Tamil Nadu. Police found a secret cavity in their car where the booty could be hidden after their 'adventures'.

The family eluded arrest for so long with an innovative method: they would mortgage jewels with nationalised and private banks and pawn brokers and then rarely reclaim them.

Asra Garg told rediff.com, "This is actually a small gang. The bigger gang is led by Muthumari's brothers in Virudhunagar. Eighteen of their associates ran away in Virudhunagar. They had obviously been informed of our raid here. They are worth millions, that gang has 10 cars. The Virudhunagar police are on the trail."

The rogue couple is now in jail along with their adopted son.