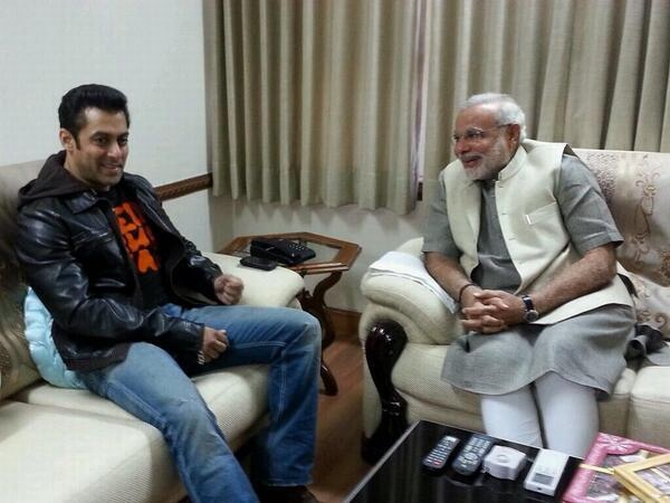 The actor had lunch with BJP's prime ministerial nominee in the state capital.

Salman said he was back in Gujarat after nine years and felt that the development in the state has been ‘terrific’.

The actor was in Ahmedabad to promote his upcoming movie ‘Jai Ho’, and his visit coincided with the Gujarati festival Uttarayan that marks the onset of spring.

“God should decide who is the best man of the country, and that man should be the PM,” Salman said. Pointing to Modi, he said, “He is a good man”.

'I have not seen this sort of development elsewhere' 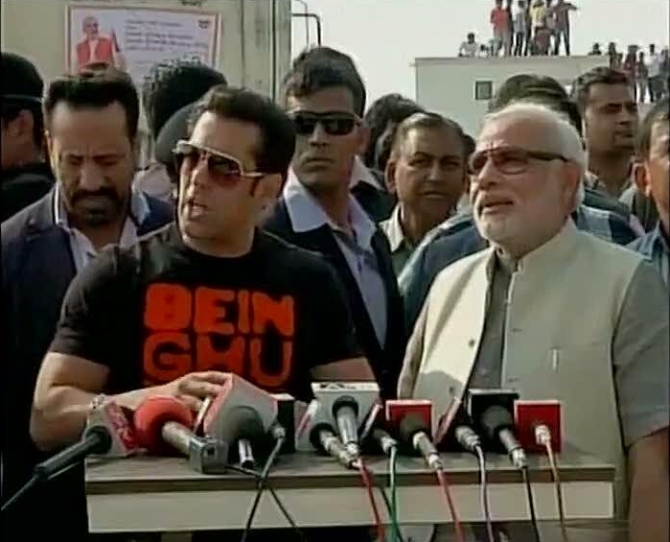 “I can see the happiness in your faces. I'm here to promote my film, Jai Ho. The best man should be PM. Whatever is written in Narendra Modi's fate, should be happen. If you think Modi is the best man, vote for him. It is your duty to vote for whoever you think is the best man," says the erudite actor.

"He is a great man, I have not seen this sort of development elsewhere," Khan told mediapersons in Ahmedabad.

Later, Modi tweeted, “It was good to see Salman Khan trying his hand at flying kites! He flew the kites well”.

Zafar Sareshwala, a critic-turned-admirer of Modi, was also present on the occasion. They were seen flying kites with local BJP leaders like Kamlesh Patel and Rakesh Shah.

The International Kite Festival is being celebrated from January 12 to January 14 in Ahmedabad.

Salman Khan meeting Modi is being seen in political circles as an attempt to appease the minority community on the day of Eid to garner votes ahead of the Lok Sabha elections.

Not an impromptu meeting 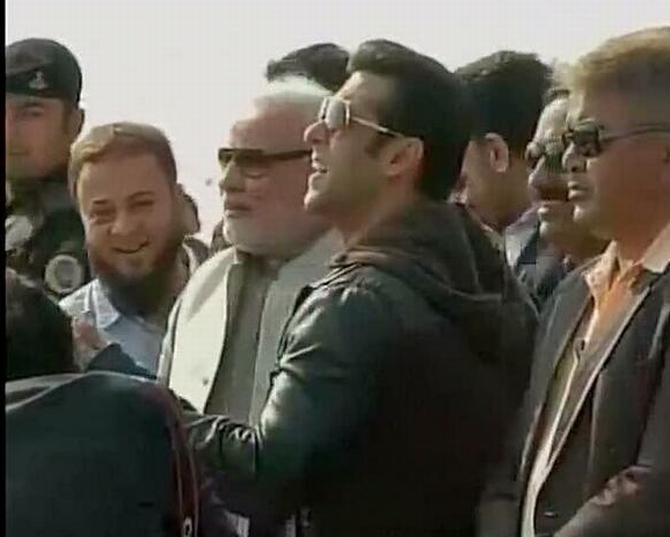 Sareshwala, an Ahmedabad-based businessman, was excited that he could take Salman Khan to meet Modi. Sareshwala told Rediff.com, “It was unimaginable for me and Salman Khan to enter the hardcore Hindu area of Old Ahmedabad along with Modi and fly kites. I could never imagine this before.”

He said Salman Khan’s visit was pre-scheduled to promote his new film Jai Ho. But when Modi came to know about it he told Sareshwala to bring along Khan over lunch.

When Modi asked Sareshwala what should be the menu over lunch the VIP guest didn’t express any choice. Over the vegetarian lunch followed by kite-flying, Modi and the superhero of Bollywood had light-hearted chitchat for over two hours. There was not much political talk, claimed Sareshwala.

Salman and Modi exchanged pleasantries and then Modi displayed his in-depth knowledge of Salman’s films, his acting style, etc over the lunch. Modi shared with Salman how much respect he has for his father Salim Khan, the famous script-writer of blockbuster film Sholay, alongwith Javed Akhtar.

Modi said that Salim Khan is like his teacher and he listens to him with rapt attention every-time he calls him.

“Once in two-three months Modi talks to him. Salim Khan speaks frankly over the phone which lasts normally for 45 minutes or more,” Sareshwala informed.

Although it’s claimed that it was impromptu meeting between Modi and Salman, but it doesn’t seem so. Salman Khan had brought packets of sweets from Mumbai for Modi. Both had lunch in the lavishly decorated circuit house, the government guest house in Ahmedabad.