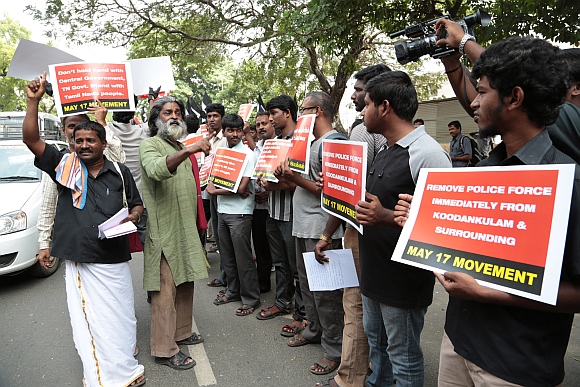 Hundreds of anti-nuclear activists and leaders of different political outfits were detained in Chennai on Monday when they attempted to lay siege to the Tamil Nadu assembly demanding scrapping of the Kudankulam Nuclear Power Plant. S Saraswathi reports.

The demonstration was called by the People's Movement Against Nuclear Energy to protest against the Kudanlulam atomic power project. During the protest, activists planned on laying siege to Fort St George, which houses the State Secretariat and assembly.

Thousands of supporters started gathering near the Rajaratnam stadium from 8. There were supporters from as many as 25 different organisations shouting anti-nuclear slogans and waving flags. Around 11 am, leaders such as Thol Thirumavalan (Viduthalai Chiruthaigal Katchi), V Gopalsamy, popularly known as Vaiko (MDMK), Ramanathapuram Member of Legislative Assembly Dr M H Jawahirullah, Pala Nedumaran and others arrived. 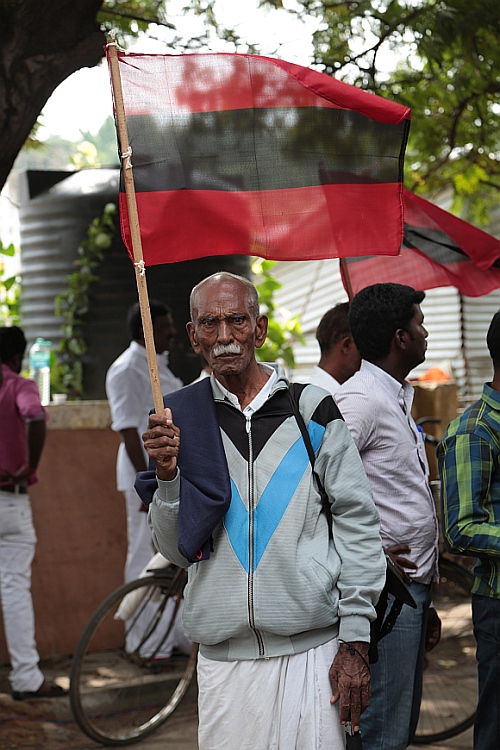 The crowd was huge, in spite of preventive arrests which had been carried out in many districts to prevent the agitators from coming to Chennai. None of the leaders of the PMANE were present. Their leader S P Udaykumar has a non-bailable warrant against him and most of their leaders face 6 to 8 cases against them.

Tirunelveli Superintendent of police Vijayendra Bidari had earlier told rediff.com, "We cannot prevent citizens from going to Chennai but those that have criminal cases against them will definitely be arrested if they try to go anywhere".

For about two hours, the leaders of the various organisations strongly expressed their protest against the Kudankulam Nuclear Power Project. They demanded abolition of Section 144 imposed at Idinthakarai, immediate release of the protestors and also withdrawal of cases against them.

They also reiterated that they would continue their peaceful protest till their demands are met. 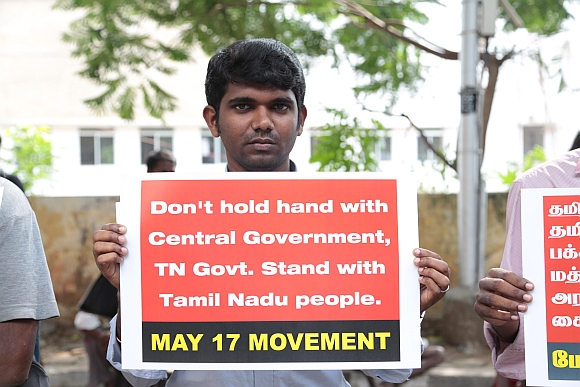 "There have been no new nuclear plants in United States since 1974, Germany has shut down many of its nuclear plants, Switzerland has banned construction of new reactors, and even Japan has announced plans to reduce its dependence on nuclear power, so why should the Tamil Nadu government support such a project?" asked Vaiko during his speech addressing the protestors.

After a peaceful demonstration, the protestors started their walk to the secretariat. They had barely walked about a 100 meters when the policemen stopped them.

All the protestors including Vaiko, Thirumavalan, 'Kolathur' Mani, Velmurugan and others were arrested and were taken away in public transport buses, which were stationed at the venue in anticipation of the protest.

There were no incidents of any violence during their protest. It was a peaceful demonstration and the protestors were taken to the Quaid-E-Millath Government College at Egmore and would be let off late on Monday evening. 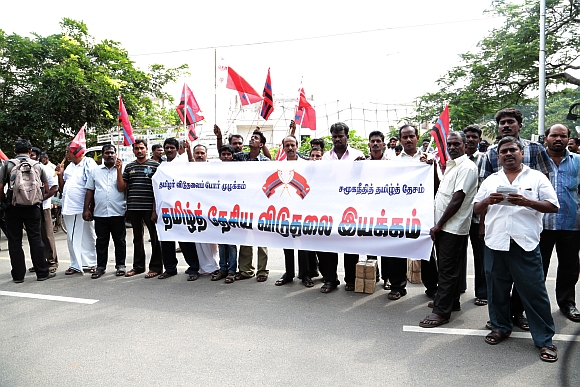 The Diamond Jubilee celebration of the Tamil Nadu Assembly, which was earlier scheduled to be on October 29, has been postponed to November 30. Around 8,000 police personnel were stationed at strategic locations all over the city.

All the roads leading to the stadium were barricaded and there were hundreds of policemen posted at the venue to prevent any mishap.

This agitation is part of PMANEs' struggle against the Kudankulam Nuclear Power Project and has been going on for more than a year now. There have been demonstrations, strikes, public meetings and protests in many districts in Tamil Nadu against this project.

The government, however, continues to maintain its stand that the plant is completely safe and is designed keeping in mind all safety concerns and in accordance with the Atomic Energy Regulatory Board.

Fuel has been loaded and power is expected to flow in November this year.