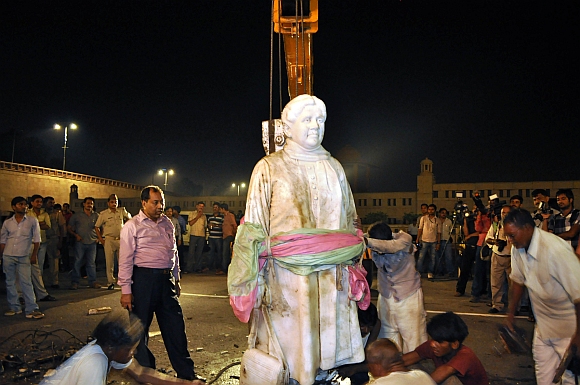 In a swift operation, Chief Minister Akhilesh Yadav's army of officials got a new statue of the former chief minister installed exactly at the same spot where four young men, proclaiming to be activists of the lesser known Uttar Pradesh Navnirman Sena used hammers to vandalise her statue.

Interestingly, the new statue was left behind by none other than Mayawati, who had got an identical one sculpted for installation in another park in the city. However, since  it could not be put up there on account of an order of the high court, it was kept in a casket in the Sangeet Natak Akademi, a stone's throw from the Ambedkar memorial.

Cornered in the wake of widespread criticism of the incident from all political quarters, the chief minister, and his father and Samajwadi Party chief Mulayam Singh Yadav, decided to get into damage control mode. 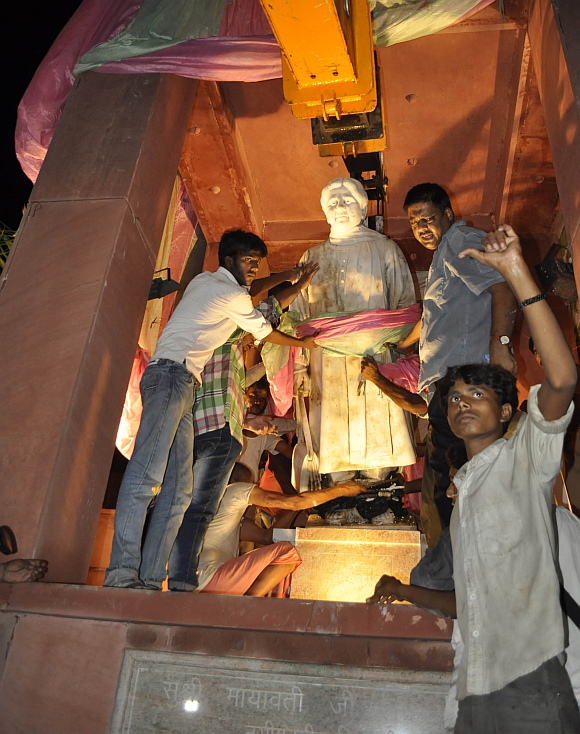 And pat came the solution from a bureaucrat, who was aware of a spare identical statue being readily available. Lucknow district magistrate Anurag Yadav instantly got into action and personally supervised the careful removal of the vandalised statue followed by the 'instant' installation of the replica.

The statue was one of the eight installed in different parts of Lucknow during Mayawati's five-year rule that came to an end in May. It was installed along a prominent road in the sprawling 200-acre Ambedkar memorial-cum-park that was built at a whopping cost of more than Rs 1,500 crore.

Earlier on Thursday, the BSP leadership had issued a warning to the Akhilesh Yadav government to ensure the reinstallation of a new statue within a week. Two prominent BSP leaders -- Naseemuddin Siddiqui and Swami Prasad Maurya -- led thousands of BSP workers to stage a road-block on the state capital's main artery -- Vidhan Sabha Marg, where they staged a sit-in before the state assembly. 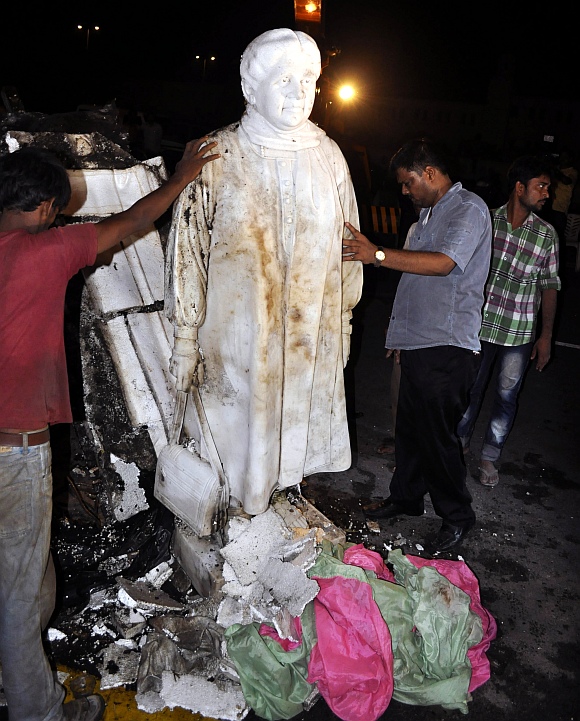 They raised loud anti-Mulayam and anti-Akhilesh slogans and pointedly blamed the ruling party for sponsoring the vandalism. They termed the act as a 'return of goondaism for which the Samajwadi Party was already quite infamous'.

Evidently, it was with a view to washing away the blot that the father-son duo chose to order the reinstallation of the statue. Ironically, both Mulayam and Akhilesh had launched their election campaign in early 2012 by declaring that they would have bulldozers run over Mayawati's statues.

However, after forming the government with a clear majority, they promptly changed their stance and began to profess that instead of pulling down the statues, they would utilise the huge space in and around the memorials to build hospitals and institutions.

However, with the passage of time, even that was given up and it was an irony of fate that the same top Samajwadi Party leadership had eventually ensured installation of the statue of their sworn political foe, whom they despised and condemned in the most vocal terms.