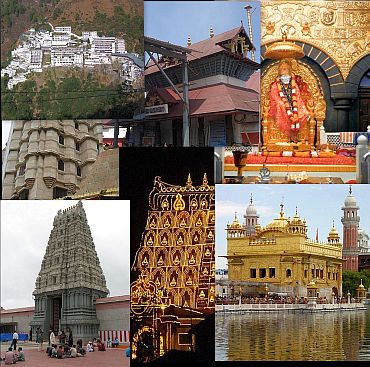 The coffers of the Sri Padmanabhaswamy Temple continue to reveal priceless treasures. Though it is estimated that the value of the treasure is around Rs 100,000 crore, the antique value of the gems, crowns and other artefacts far exceeds that.

India's temples stand witness to the rich cultural heritage of the country. Spread over almost each and every part, the temples reflect the devotion of the followers of the Hindu faith.

And their devotion often reflects in the balance sheets of temple trusts.

Let's take a look at some of the richest temples in India. 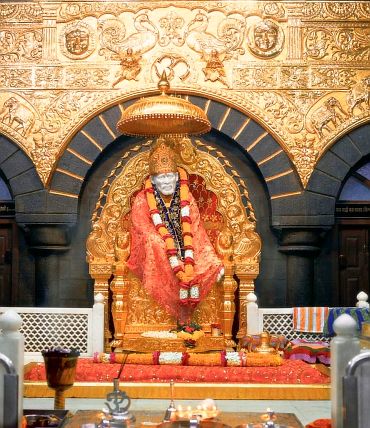 The Shirdi Saibaba Temple, located at Shirdi, Maharashtra, attracts millions of devotees of all religions, castes and creed.

According to information from the Shirdi Sai Trust, the temple gets an average of Rs 350 crore in donations every year.

Besides this, the temple has ornaments and jewellery worth Rs 32 crore and investments running into Rs 427 crore. 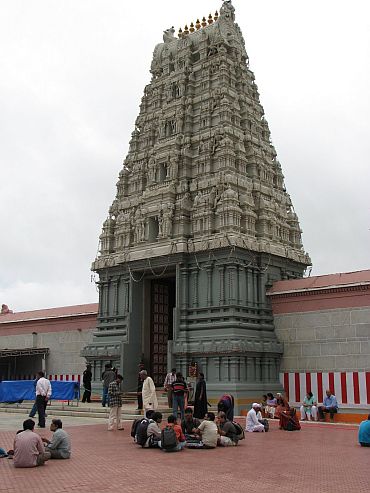 With a history stretching back over twelve centuries, the temple is the jewel in the crown of old temples in southern India. On an average around 60,000 pilgrims visit the temple every day, and on special occasions up to 3,00,000 per day.

TTD earnings have increased with the 'hundi' (donations given by pilgrims after darshan) collections touching Rs 650 crore in the 2010-11 and are likely to cross Rs 675 crore mark by 2011-12. The temple has a reserve of five tonnes of gold and Rs 560 crore in fixed deposits.

Interestingly, the deity alone is clad with about 1000 kg gold. 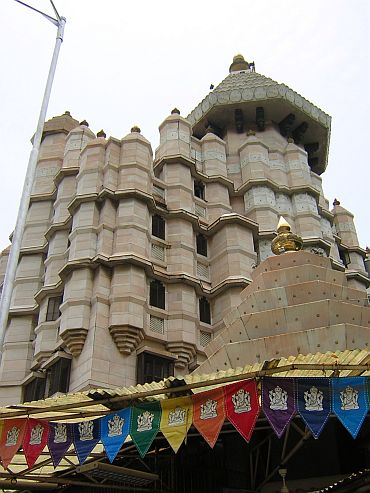 Shree Siddhivinayak Ganapati Mandir situated at Prabhadevi in Mumbai is the second most richest temple in Maharashtra.

This temple was first consecrated on Thursday 19th November 1801, a fact that is noted in government records. Every Tuesday, devotees visit the temple in large numbers to offer prayers, with some even walking the long distance from home, for the Kakad arti (Tuesday is considered Ganesha's day). The devotees on Tuesdays number at a daily five lakh, according to reports.

The total trust income of the temple was Rs 48 crore in the financial year 2010-11 and had Rs 125 crore in fixed deposits. 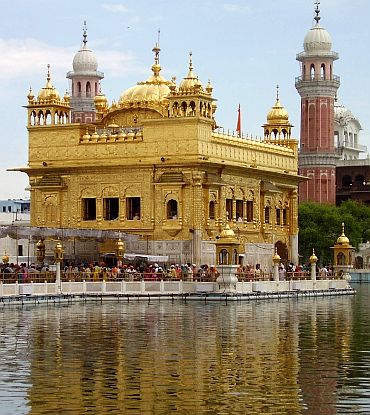 Sri Harmandir Sahib, also know as the Golden Temple in Amritsar is the holiest shrine of the Sikh religion.

The walls within are decorated with carved wooden panels and elaborate inlay work in silver and gold.

The palanquin that bears the Adi Granth can be seen in the treasury room on the first floor of the Akal Takht. The palanquin is set with precious stones and has silver poles and a gold canopy.

Cooked food is serviced in the kitchen of the Golden Temple 24 hours to all visitors irrespective of religion, caste, creed and nationality. The expenses are met out of the Temple funds. Approximately 40,000 visitors share the meals everyday presently Like with most old Shrines, it is not possible to ascertain when exactly the pilgrimage to the Holy Shrine started.

Every year, more than 4.5 million pilgrims visit the holy shrine.

It has an annual income of Rs 500 crore. 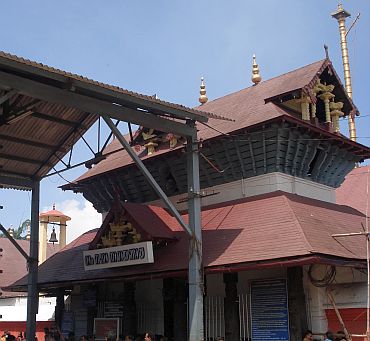 The Guruvayur Sree Krishna Temple is a famous Krishna temple located in the town of Guruvayur in Kerala's Thrissur district. Around 25,000 devotees from across the world visit the temple every day.

Guruvayur temple had about 13,000 acres of land until the Kerala Land Reforms Act came to force. Presently, the Guruvayur Devaswom Board has 230 acres of land,  including that purchased after the Act.

The major income of Devaswom is from the temple as offerings by devotees. The temple has a corpus of Rs 400 crore.

The shrine spends about Rs.2 crore on the rituals and maintenance and to provide for the 1,000 people on its rolls. Besides, rich devotees donate one-time grants and elephants to the temple.

A recent news report stated that the Sri Krishna temple in Guruvayoor, Kerala, received a record collection of Rs. 2.5 crore in a month by way of hundi collection. 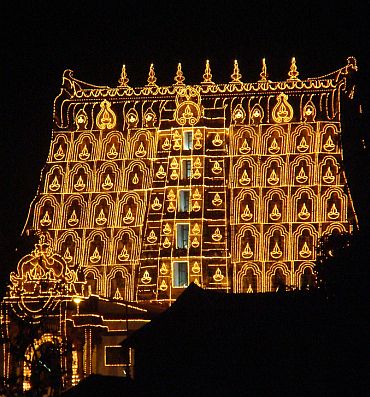 Also known as Sri Ananda Padmanabhaswamy Temple, this Mahavishnu Temple is located inside East Fort, in Thiruvananthapuram, Kerala. Lord Vishnu is enshrined here in the Anananthasayanam posture (in eternal sleep of yognidra), lying on Sri Anantha, the hooded snake

All it took was an altercation between advocate TP Sunderrajan and the current head of the Travancore Royal family, Uthradom Tirunal Marthanda Varma, to light the treasure hidden within the Sree Padmanabha Swamy temple in Thiruvananthapuram.

Some of the list of gold inventory found in the temple include golden crowns, 17 kg of gold coins dating back to the East India Company period, gold in the shape of rice trinkets weighing one tonne, 18 ft long golden necklace weighing 2.5 kg, gold ropes, sack full of diamonds, thousands of pieces of antique jewellery studded with diamonds and emeralds, and golden vessels.

Hold your breath, the second of the two cellars is yet to be opened.