'The PM is guilty of a conspiracy of silence' 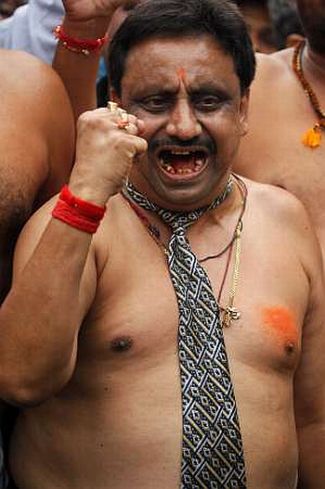 In the first part of the interview Arun Jaitley, Leader of the Opposition in the Rajya Sabha, took on the government on the 2G spectrum issue.

Part I: 'PM's PAC offer a master act of deception'

In the concluding part of the interview with Rediff.com's Sheela Bhatt, among other things, he rebuts Telecom Minister Kapil Sibal's charge that the Atal Bihari Vajpayee government caused massive losses due to its telecom policy and says that government was instrumental in the phenomenal increase in tele-density in the country.

What are your main demands to allow Parliament to function? Can't you think of a solution to the issue? As everyone understands this can't go on and on. The interests of the people are being compromised when Parliament doesn't function.

I don't have a magic wand. The obstruction of Parliament is extremely unfortunate. It should be resorted to as a matter of last resort -- in the rarest of rare cases. But, yes, we did it.

If Parliament had not been obstructed, even the Indian media would not have realised that such a monumental scam had taken place. We were crying hoarse for the last two years about it, but the media choose to ignore us. It was also guilty of negligence in covering an issue of such massive corruption.

The prime minister is guilty of a conspiracy of silence. If Parliament was not obstructed, (then telecom minister) A Raja would not have resigned, raids would not have taken place and this plunder of Rs 1.76 lakh crore would not have been in the public eye.

'Sibal is a propagandist' 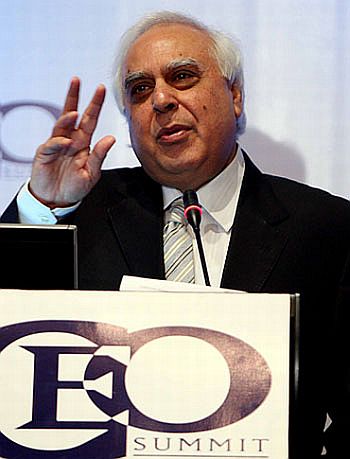 Sibal says the amount of Rs 1.76 lakh crore loss during the UPA (United Progressive Alliance) regime that is being quoted is a notional amount while the loss during the NDA regime is actual loss.

He points out that the way the NDA allowed Uniform Access Licences and the way dual technology was allowed is questionable. In fact the NDA policy ended up in hoarding of spectrum by companies and that resulted in a huge loss.

Sibal is a propagandist. That is the role he is playing in this ministry. His only attempt is to confuse facts. I will disprove what he is saying.

The loss suffered due to 2G spectrum scam is not notional. The Comptroller and Auditor General has given four set of figures. One possible way of calculating loss in 2G is to compare it with income earned by the government through the 3G spectrum auction.

But, if you only take 2G alone, the loss is simple to calculate. First, you (Raja) didn't auction the spectrum. You allotted the spectrum in 2007 at 2001 prices. For all India licence, if all circles are put together, it (the telecom company) paid Rs 1,652 crore.

The very next day the company uses the 74 percent FDI provision and goes for a private auction. And overnight the company values the same spectrum at Rs 9,500 crore.

The loss per licence to the exchequer is close to Rs 8,000 crore. You had nine all India licences that year. All that you have to do is multiplication. I am sure Sibal is capable of doing that. So, the loss is not notional.

Two of the licence holders when they went into dilution of their equity valued it in this manner. When the spectrum was allotted at Rs 1,652 crore the market has valued it at Rs 9,500 crore on the same day!

I will explain what happened during the (Atal Bihari) Vajpayee-led government. The Congress was completely illiterate in formulation of its telecom policy in 1993-94. They based it on the high-licence fee formula. The effect was that India's tele-density which was 0.8 percent was too small for telecommunication companies.

The operators were not philanthropists so they transferred the cost of high-fees of licence to consumers. As a result, per minute mobile rates were Rs 16. Therefore, due to the Congress policy, mobile telephony in India became a disaster.

Another illiterate thing that the pre-NDA government did was that they declared that each circle would have only two operators. They created a duopoly which went against the interests of consumers. Then several litigations were filed and the whole expansion of telecommunication sector was stalled.

What the NDA government did in 1999 was to shift to revenue-sharing basis instead of a high-fee licence regime.

Till 2010, due to this the government got much more than we could have ever got through the high-fee licence. So, history has proved that the Somnath Chatterjee document was bogus.

India's tele-density has increased from 0.8 per cent to around 65 per cent. In some urban cities it is crossing even 100 per cent. The cost of telecom services in India is the cheapest in the world because of the policies of the Vajpayee government.

The second initiative the Vajpayee government took was that it allowed WLL technology that can be used to shift from mobile to a fixed line. Some people used it without permission to make it unlimited mobility. We took action and penalised them.

The third initiative was allowing Uniform Access Licence that was technology neutral. We ensure that they paid money and also paid fines for misusing it. 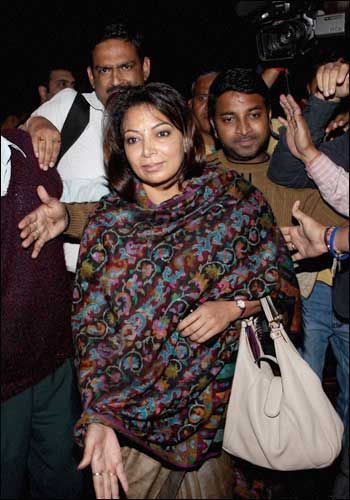 The present set of disclosures being made about various business houses doesn't make any comment authentic because they are competitors in the field.

The Vajpayee government's three telecom initiatives helped the telecom revolution in this country. Each NDA decision on the telecom policy has been challenged and tested in court. Each one of them has been upheld including the policy of revenue sharing.

The Congress finds it frustrating that there is an onslaught by the BJP on the issue of corruption in name of the 2G scam while you are ignoring your own backyard.

One (Vajpayee's foster son-in-law) Ranjan Bhattacharya's conversation with (corporate lobbyist) Niira Radia is on tape, yet you still keep talking brazenly about the Radia tapes.

The corruption charges against the Karnataka chief minister are ignored by the BJP. In fact the BJP's defence is weak, but B S Yeddyurappa continues in his job.

The Congress claims that they have taken many more steps against allegations of corruption. The BJP has not responded to that allegation.

Also, it's a fact that you were found wanting in action in Karnataka, but, still, you are picking up the corruption issue in New Delhi and you don't want Parliament to function.

Let me start with the last one. The health of all institutions that has culminated in the spectrum row along with all accompanying disclosures which have been made clearly establishes that it is not the Supreme Court's job to investigate what is happening. They have to decide judicial matters.

I have no faith in retired judges judging policy matters. My experience shows how the Banerjee commission report claimed that kar sevaks set fire to the train in Godhra. He has given a bad name to the institution of retired judges who are engaged in such work.

The CBI can investigate only the criminality part of the scam and nothing more. The PAC can debate only accounts and audits and profit and loss nothing more. The JPC is necessary for reasons I elaborated earlier.

If the government is so transparent they should listen to its parliamentarians. Parliament cannot be the mute spectator. It can't abdicate its responsibility. Now, if some people in their individual capacity are found gossiping with powerbrokers they do it at peril of their reputations. I have nothing to say about it.

You are talking about Ranjan Bhattacharya?

I am not getting into names. There are many people who have done that. We are fully conscious of what is going on in Karnataka. The Lokayukta is going into the matter. A commission of inquiry has been appointed which is transparent and public. The party itself is looking into it. The process is on.

The party president himself has said that a retired chief justice, who is a Member of Parliament and a man of great integrity, is examining each of these allegations.

'We are going to win the panchayat elections in Karnataka' 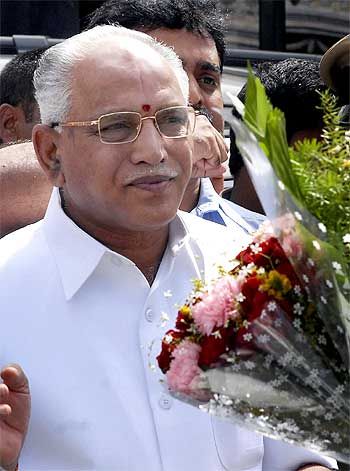 Some charges have been made and we are looking into it.

This is a typical formal reaction.

I don't think I am going to give any knee-jerk reaction.

So, you are defensive.

Absolutely not. We are going to win the panchayat elections in Karnataka. We are aggressive in the field. The Congress is going to do miserably in the Karnataka local elections.

But what about the grave charges against (Karnataka Chief Minister B S) Yeddyurappa?

I have examined some of the charges myself. There are some which are just propaganda and on some which he has his version. Somebody needs to test it. The commission of inquiry is doing precisely that.

Mind you, the discretionary land allotment for which he is being made accountable has been the past practice in Karnataka. The commission will look into what the present CM did and what the last few CMs did.

You came into the BJP from the Akhil Bharatiya Vidya Parishad which is the student outfit of the Rashtriya Swayamsevak Sangh. All the accused in the Malegaon and Ajmer bomb blasts case are linked to the RSS. Do you feel embarrassed?

Let me be very clear: The RSS has made a categorical statement, repeatedly, that they are opposed to any such incident and any such act of violence. They (the accused)may be, in the past, attached to the RSS, but I am told that of their present functionaries only one man's name (Indresh Kumar) has cropped up and the RSS is looking into it.

The RSS is a nationalist organisation. They don't believe in violence and they have clarified it, not once but many times.

'The Congress is aggressive only in press conferences' 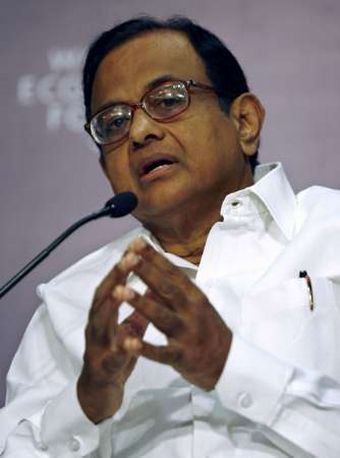 Coming back to the 2G issue, it seems that the Congress is very weak now, but it is trying to get back on track by trying to defuse the 2G issue before the Budget session of Parliament arrives.

Once the CBI takes action, say against Raja, then you may have to cool down.

Will you then, allow the Budget session to carry on?

I am not answering the hypothetical question. Yes, the Congress is very weak amongst the people today. They lost the Gujarat panchayat election, then they lost Bihar. Now they are likely to lose the Karnataka local election.

The Congress is aggressive only in press conferences.

Congress leaders allege that the BJP is jealous because you lost the general election.

How can I be jealous of the corrupt?

At the recent Congress conclave, Home Minister P Chidambaram told the BJP that aap ka number nahin aayega (the BJP is not going to get a chance to come back to power).

I can tell you what Vibhishan advised Ravan: Tumhara ahankar tumhe le dubega! (your arrogance will sink you!)

At the end of the day many feel the BJP is just exploiting the 2G spectrum issue for political reasons.

We have raised moral and ethical issues of Indian politics where the Congress has been culpable. Some of them are guilty of corruption and some others are guilty of a conspiracy of silence.

Kapil Sibal has given a twist to the corruption debate, saying that the issue of corruption is a societal issue plaguing the Indian system.

When she was facing charges of corruption, Indira Gandhi also said it is a global phenomenon. She is remembered for many things, but not for the highest standard of integrity.