'Pakistan knows it can't win a conventional war with India' 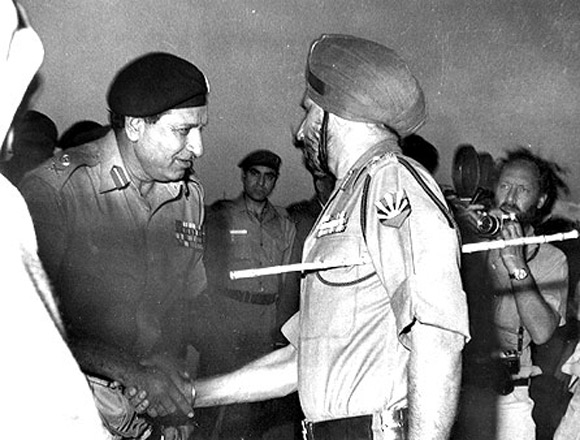 'Such barbaric acts reflect that there has been a Talibanisation of the Pakistan army.'

"There has to be an operational rethinking in the Indian Army," says Lieutenant General D B Shekatkar (retd). "It has to be a proactive rather than a reactive army."

Pointing out to what United States Defence Secretary Leon Panetta said recently that America will take action against anyone from whom there is a threat, the retired general said similarly, if India feels that there is an imminent threat from any sector on the Line of Control, which divides India and Pakistan in Jammu and Kashmir, it should take firm action rather that waiting for an attack first.

"If there is a violation of ceasefire and incidents like the crude beheading and mutilation of troops, then the local commander should have the authority to retaliate immediately to prevent further ingress and to halt them from taking further liberties again and again."

"If you retaliate after a few days, then the impact of retaliation is lost and according to international norms, you will be accused of violating (the ceasefire), but if you retaliate immediately then you can say they acted first and there was no option but to retaliate," the general told Rediff.com on the telephone from Pune.

"If you say we will do it at a time and place of our choosing, then it does not make that much sense of what is required to be done," General Shekatkar said.

There are mainly three reasons for retaliation along the LoC: Retaliation in self defence when the soldier is fired upon from across;
Retaliation when there is a violation of the ceasefire; and,
Retaliation to punish them so that they don't repeat it again.

'The Indian Army has to be proactive rather than reactive' The radicalisation and Islamisation of the Pakistan army began with then president General Zia-ul Haq, General Shekatkar said.

There were instances of mutilation and beheading of Indian soldiers in the early 1990s, which precedes the Kargil War.

"Pakistan knows it cannot win a conventional war with India, that it will suffer a crushing defeat if it fought a conventional war; that is why it has continued with the policy of bleeding an army of 1.3 million and a country of 1.2 billion people by a thousand cuts."

The general was part of several flag meetings with his Pakistani counterparts when he served the army and as Additional Director Military Operations has had the opportunity to speak to the DGMO, Pakistan, when the Indian DGMO was out of station.

Forty-one years after Pakistan's defeat in the 1971 war, the Pakistan army still has not been able to reconcile to its defeat and the creation of Bangladesh, the general felt.

The present senior echelons of the Pakistan army must have been 17, 18 years at that time, he added, and carry that grudge which has been passed on to younger soldiers who were not even born at that time.

'Such barbaric acts reflect the Talibanisation of the Pakistan army' 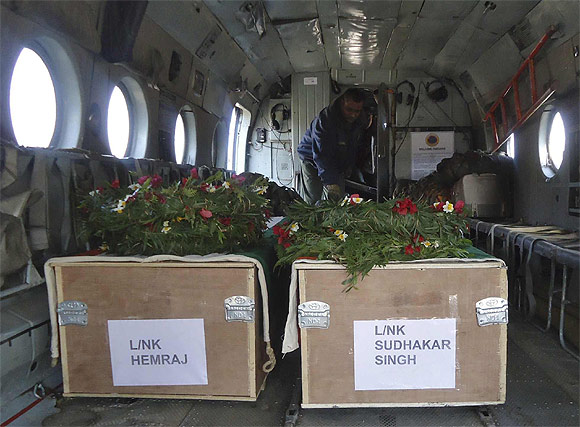 Image: Coffins bearing the bodies of slain soldiers Lance Naik Hemraj and Lance Naik Sudhakar Singh at a garrison in Rajouri. The soldiers' bodies were mutilated when recovered.
Photographs: Reuters

An officer who knows too well the pain of sending the dead body of a martyred soldier to his home and family, the general, who has served multiple tenures in Jammu and Kashmir, says however noble the intention it is to retrieve slain Lance Naik Hemraj's head, it is a difficult task.

"Firstly, Pakistan has not accepted that the act has been done by them and returning the head would prove their crime. Secondly, nearly ten days later, it is difficult to imagine the condition of the severed head, which would depend on the availability of a mortuary at the forward area," adds General Shekatkar, stressing the barbarity of the beheading, which has added to the martyr's family's agony because they had to conduct the last rites deprived of being able to see his face one last time.

"To be able to see the face of a loved one who is no more, is part of our Indian culture. Imagine, what the pain of the family of that soldier must be," the general, who has also served extensively in India's Northeast, said.

"Such barbaric acts reflect that there has been a Talibanisation of the Pakistan army. Such a mindset is bound to have an impact on events within their own country," he continued.

"An army that gets used to barbarism cannot overnight change and behave in a humanitarian manner and abide by the code of conventional/unconventional operations."