Pakistan has 10 more nukes than India! 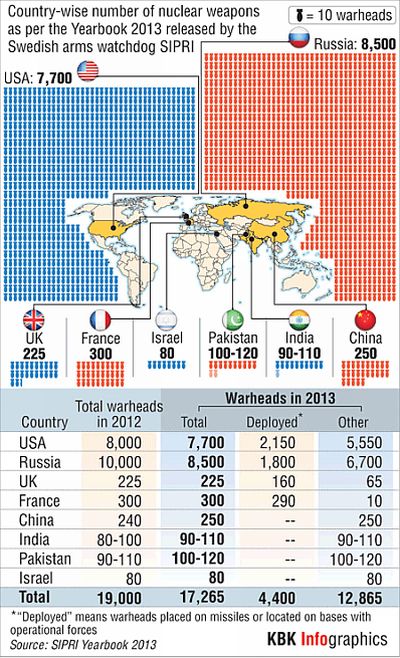 India, Pakistan and China have expanded their nuclear arsenals over the past year, a study said on Monday against the backdrop of what it called a "fragile" peace in Asia.

India has added roughly 10 nuclear warheads for a total of 90 to 110 in 2012; Pakistan has increased its warheads by about 10 to between 100 and 120; and China now has 250 against 240 in 2012, the Stockholm International Peace Research Institute (SIPRI) said in its annual report.

The study said India and Pakistan are also expanding their missile delivery capabilities.

In view of tensions between India and Pakistan, China and Japan, South Korea and North Korea and others, SIPRI finds the arms race all the more disturbing in view of what it called a "fragile" peace in Asia.

Russia and US are reducing nuke stock 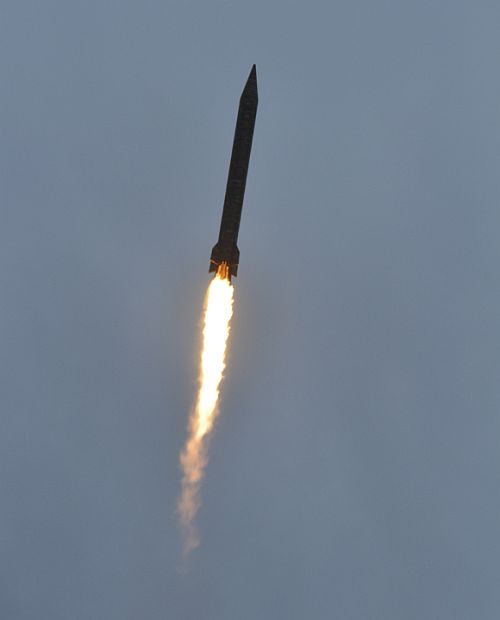 "While states have avoided direct conflict with each other and have stopped supporting insurgent movements on each other's territory, decades-old suspicions linger and economic integration has not been followed up with political integration," SIPRI said.

While the progress towards a global ban on cluster munitions stalled in 2012, it noted the decrease is due mainly to Russia and the US further reducing their inventories of strategic nuclear weapons.

The warheads controlled by France stayed at 300, while Britain's remained at 225, and Israel's at 80.

China seems to be expanding its arsenal 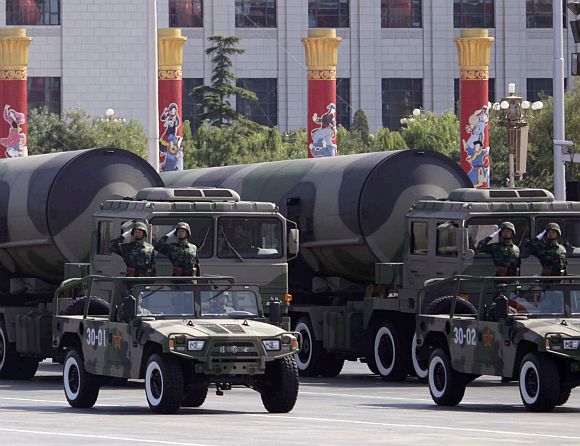 SIPRI, however, said the figures were to a large extent  estimates, as the nuclear powers aren't equally transparent, China being totally opaque, and Russia gradually becoming less open.

It does not count North Korea and Iran as nuclear powers yet, as their respective programmes are still considered in their early stages.

All five legally recognised nuclear weapon states -- China, France, Russia, the UK and the US -- are either deploying new nuclear weapon delivery systems or have announced programmes to do so, and appear determined to retain their nuclear arsenals indefinitely, the report said.

Of the five, only China seems to be expanding its nuclear arsenal and SIPRI said and noted that China had overtaken Britain as the world's fifth largest arms exporter after the US, Russia, Germany and France. 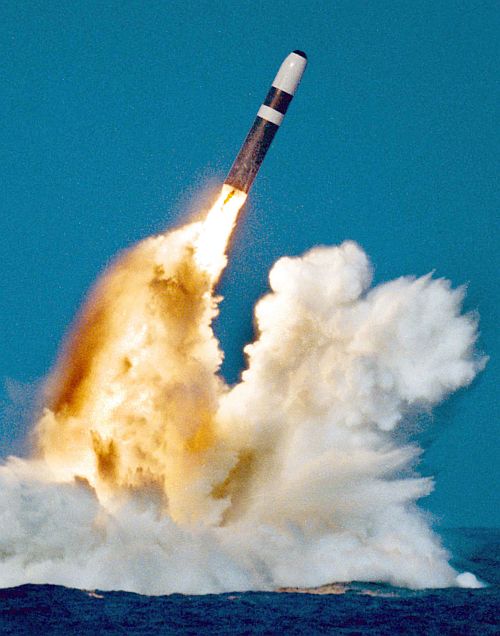 At the start of 2013, eight states -- the US, Russia, the UK, France, China, India, Pakistan and Israel -- possessed approximately 4400 operational nuclear weapons. Nearly 2000 of these are kept in a state of high operational alert.

SIPRI noted that these states together possess a total of approximately 17,265 nuclear weapons, as compared with 19,000 at the beginning of 2012 though it did not translate the trend into a significantly diminished nuclear threat.

"Once again there was little to inspire hope that the nuclear weapon-possessing states are genuinely willing to give up their nuclear arsenals," said SIPRI Senior Researcher Shannon Kile.

"The long-term modernisation programmes underway in these states suggest that nuclear weapons are still a marker of international status and power."

US and Russia have not destroyed all their chemical weapons 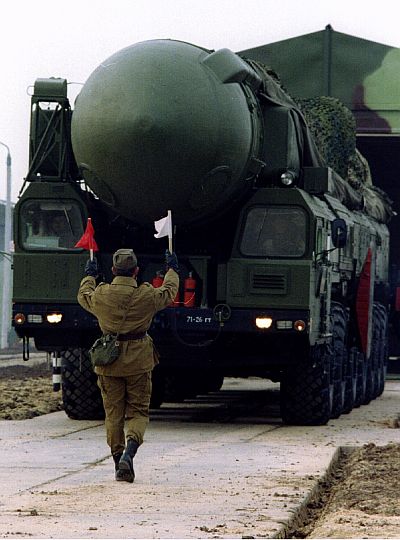 As a long-time advocate of abolishing weapons of mass destruction, SIPRI said that efforts to reduce arsenals of chemical and biological weapons have also been slow.

The US and Russia have not destroyed all their chemical weapons in 2012 as promised. Syria, in the grip of a bloody uprising for more than two years, has said it is prepared to use its weapons in the case of foreign attack.

SIPRI figures also show that the number of peacekeepers deployed around the world fell by more than 10 per cent in 2012, due in part to the beginning withdrawal of international forces from Afghanistan.