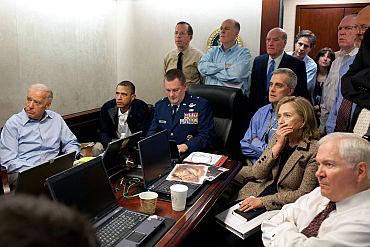 Sitting on a chair along with his top national security advisors in the Situation Room, located in the basement of the White House last Sunday afternoon, it was one of the longest 40 minutes of United States President Barack Obama's life.

In tense-filled moments, Obama and his national security aides held their breath many a times, while they were having real-time access to information of covert military operation in distant Pakistan to kill al-Qaeda leader Osama bin Laden.

"It was the longest 40 minutes of my life with the possible exception of when Sasha got meningitis when she was three months old. It was a very tense situation," Obama told the 60 Minutes show on CBS News in his first exclusive interview after the death of bin Laden.

Obama said the mood in the Situation Room was tense and he was nervous as the operation went along.

Fifty-four-year-old bin Laden, the world's most wanted terrorist, was shot dead by US forces in a successful operation in Pakistan's garrison city of Abbottabad on May 2. Officials say Osama was killed towards the later part of the 40-minute raid by special US forces.

'Killing Osama worth the political risks' 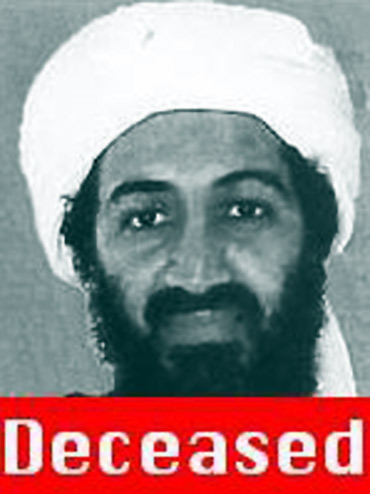 Obama conceded that it was a very risky venture he had approved, given that none of his aides and the intelligence were 100 per cent sure of Osama's presence in Abbottabad.

"I concluded that it was worth it. And the reason that I concluded it was worth it was that we have devoted enormous blood and treasure in fighting back against the Al Qaeda. Ever since 2001 and even before with the embassy bombing in Kenya," he said.

"I said to myself that if we have a good chance of -- not completely defeating but badly disabling the Al Qaeda -- then it was worth both the political risks, as well as the risks to our men," the US President said.

'Deeply proud of team that got Osama' 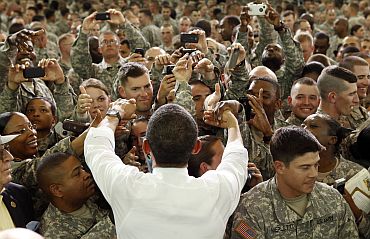 Obama said he got to know that bin laden has been killed only in the last minutes of the operation.

"There was a point before folks had left, before we had gotten everybody back on the helicopter and were flying back to base, where they said Geronimo has been killed," he said.

"Geronimo was the code name for bin Laden. And now obviously at that point these guys were operating in the dark with all kinds of stuff going on so everybody was cautious. But at that point cautiously optimistic," he said.

Obama said he was relieved and wanted to make sure the men got over the Pakistan border and landed safely and added that he was deeply proud and satisfied of his team.

"When they landed we had very strong confirmation at that point that it was him. Photographs had been taken. Facial analysis indicated that in fact it was him. We hadn't yet done DNA testing, but at that point we were 95 per cent sure," he said.

'Osama had support network in Pak' 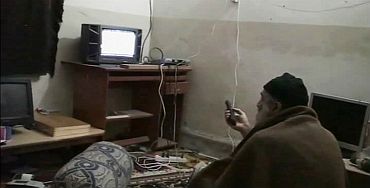 "We think that there had to be some sort of support network for bin Laden inside of Pakistan. But we don't know who or what that support network was," Obama told the '60 Minutes' show.

His comments came as his top security advisor said there was no evidence so far that the Pakistan government knew about the Al Qaeda chief's presence in the country.

"We have already communicated to them, and they have indicated they have a profound interest in finding out what kinds of support networks bin Laden might have had. But these are questions that we're not going be able to answer three or four days after the event. It's going to take some time for us to be able to exploit the intelligence that we were able to gather on site," Obama said.

'Since 9/11, Pak has been a strong counter-terrorism partner' 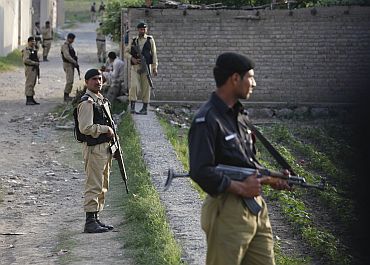 Refraining from making any adverse comment on Pakistan given that stakes are high right now, Obama said he has to be careful about sources and methods and how America operates and how it pieced together this intelligence, because they are still be going after terrorists in the future.

"But the fact of the matter is, is that we've been able to kill more terrorists on Pakistani soil than just about any place else. We could not have done that without Pakistani cooperation. And I think that this will be an important moment in which Pakistan and the United States gets together and say,

'All right, we've gotten bin Laden, but we've got more work to do. And are there ways for us to work more effectively together than we have in the past," he said.

'Anti-US climate makes it difficult to operate in Pak' 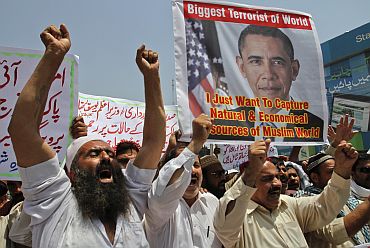 there's also a climate inside of Pakistan that sometimes is deeply anti-American. And it makes it more difficult for us to be able to operate there effectively," the President said.

Obama said he did not feel the need of telling anybody in the Pakistani government about this covert operation. "If I'm not revealing to some of my closest aides what we're doing', then I sure as heck am not going yo be revealing it to folks who I don't know," he said.