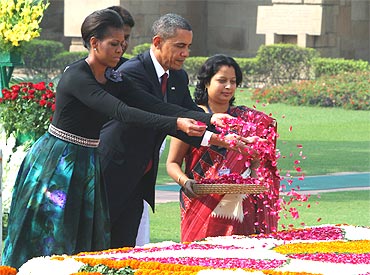 The Obamas reached the memorial of the Father of the Nation in Delhi after being accorded a ceremonial reception at the Rashtrapati Bhavan.

'We will always remember the great soul' 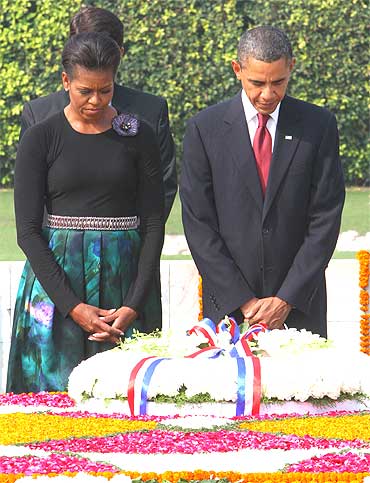 The US First Couple placed a wreath at the memorial located on the banks of Yamuna.

"We will always remember the great soul who changed the world with his message of peace, tolerance, of love. More than 60 years of his passing (away), his light continues to inspire the world," the US President wrote in the visitor's book. 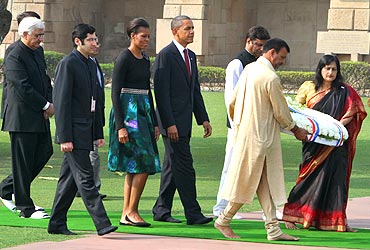 Obama handed over the memorabilia to Rajnish Kumar, secretary of Rajghat Samadhi Committee. The US First Couple bowed their heads and stood in silence for a minute next to the Samadhi. They also placed a wreath and showered flower petals on it. 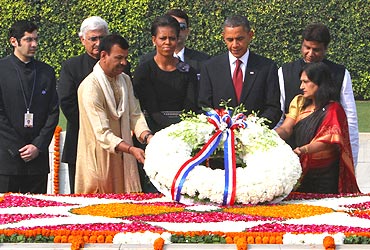 "Simple and very beautiful," Obama, who has always acknowledged the Mahatma's influence on him, said as Michelle nodded, "very beautiful."

The visiting dignitaries took off their shoes before entering the memorial. They were received by Kumar, who presented them a charkha, a Gandhi bust and a scroll which describes the seven social sins, as defined by the Mahatma.