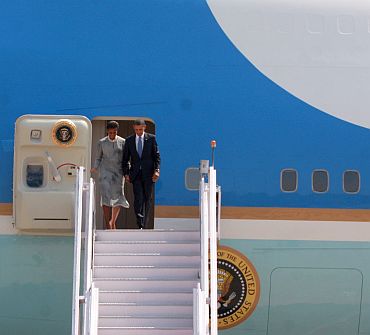 US President Barack Obama arrived in India on Saturday on a three-day visit during which about 18 announcements are expected to be made on a wide range of areas covering economy, security and political spheres including possible easing of export controls on dual use items.

Obama, the sixth US President to visit India and the third in 10 years, arrived in Mumbai along with his wife Michelle, cabinet colleagues, National Security Adviser Tom Donilon and 200 business leaders, the largest such delegation ever. 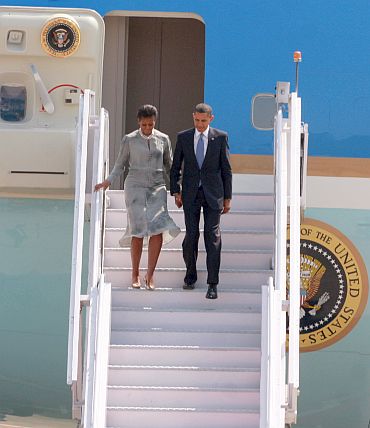 The US Air Force One touched down at 12:50 pm on a visit, which Donilon said the President intends to be "a full embrace of India's rise, a way to develop and deepen the broadest possible relationship with India as a cornerstone of our Asia policy."

The Presidential couple was warmly received by Maharashtra Chief Minister Ashok Chavan, Union Minister Salman Khursheed, who is the minister-in-waiting, US Ambassador to India Timothy Roemer and Indian Ambassador to the US Meera Shankar.

After pleasantries, the President and his wife walked across the tarmac to a waiting US Marine One, which flew them to the downtown. A smiling President waved to a strong gathering of journalists and photographers. 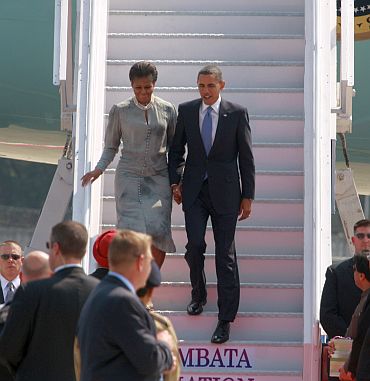 En-route to Mumbai, Donilon told the travelling media that 17 or 18 announcements across a range of economic, security and political dimensions could be expected during the visit.

"There will be a number of specific announcements, obviously, as we go forward. But it really isn't just the transactional nature here. It is the overall thrust of the relationship," the US National Security Adviser (NSA) said.

Under Secretary of State William Burns said the relationship with India has grown "quite dramatically" over recent years and referred to the four-billion-dollar worth of defence sales to India since 2008. "There are some other big sales that are in the offing," he said. 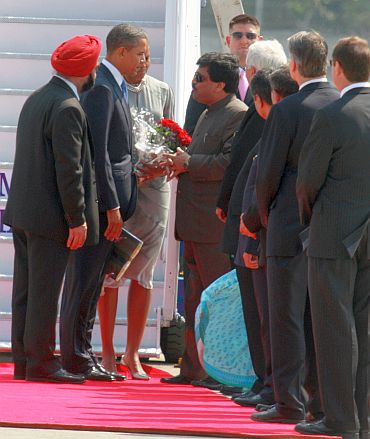 "It is a relationship that has grown an enormous amount in the last decade and, I think, has enormous potential as you look out at this visit and beyond it," he said.

Deputy NSA Ben Rhodes said the first day of the trip will focus on the "economic relationship, issues related to the transactions, US exports, export controls, things in that category".

Donilon said the Presidential trip has a "powerful message" to the people of India and the people of the US about the importance and the depth of the relationship and that is a very important thing to do. 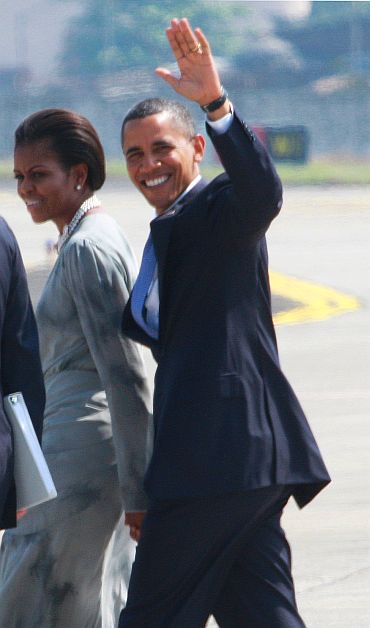 "The range of specific things that we are doing here really is intended to show and, in fact demonstrate a global partnership," he said.

On Afghanistan, Burns acknowledged India's role saying it has contributed about 1.3 billion dollars in development assistance and made quite significant contribution to agriculture and other areas.

"It is something that we welcome. Afghanistan government does that too," he said. 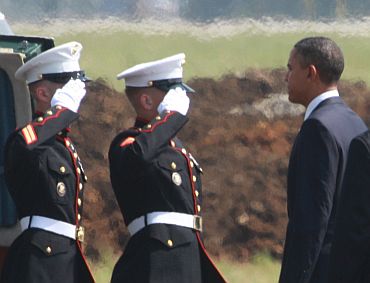 Asked whether Obama was going to talk Kashmir at all on the trip, Donilon said he would not like to get into exactly what the President would talk to in his private conversation with Dr Singh.

"We have, as a longstanding policy, have encouraged the Indians and Pakistan to engage in dialogue on a range of issues and we continue to encourage that," he said.