'President Obama's visit to India was a stunning success' 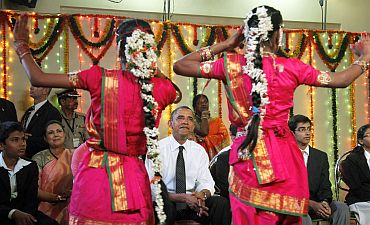 But in an interview with rediff.com's Aziz Haniffa, Tellis, a senior associate at the Carnegie Endowment for International Peace who traveled to India to observe the visit, admitted that Obama's visit had been 'a stunning success'.

You traveled to India specifically to observe the visit, what's your bottom-line assessment about it?

I believe President Obama's visit to India was a stunning success. The biggest problem that dogged India-US relations during his presidency was whether Obama was as committed to the partnership with India as Bush was. There were many sceptics in India and in the United States. This time around, he answered the sceptics resoundingly.

The sum and substance of his words and actions could be boiled down to three propositions: First, India matters -- for the world and especially for the United States. Second, the success of the Indian experiment has profound consequences for the global order and, consequently, the United States does not simply cheer the rise of Indian power but will support its ascendancy. Third, unlike Pakistan, which presently represents trouble, and China, which potentially represents threat, India represents only unbounded opportunity -- and, therefore, a global partnership between the United States and India brings only benefits for both and for all.

Backing UNSC bid was 'his decision to make' 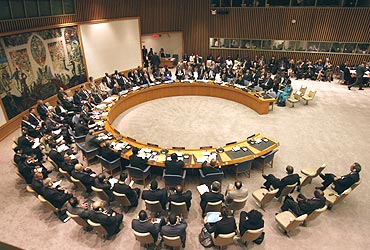 How important was Obama's endorsement of India's bid for a permanent seat in the United Nations Security Council? For all the symbolic value it entails, does it really matter?

Obama's endorsement of India's candidacy for UNSC permanent membership was critically important because it proved better than anything else the proposition that India matters. It also conveyed Obama's own commitment to taking the relationship forward --this was alone his decision to make, and he made it. It signals to India's neighbours how the United States views India and its importance in creating a stable Asian order. In fact, because the language used went beyond that previously used by the United States to endorse Japan's candidacy, the status of India as a special friend was only underscored. I was chagrined by the looking the gift horse in the mouth attitude adopted by some Indian commentators -- that many potential UNSC aspirants were peeved by Obama's endorsement of India speaks louder than some of the carping in India.

'The US walked away with orders running into billions' 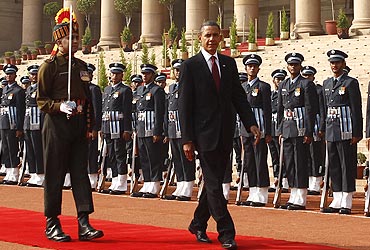 Besides the UNSC endorsement, what would you tick off as the substantive and tangible benefits of the visit?

There were tangible benefits on both sides. The US walked away with orders and contracts running into billions of dollars. India advanced its goal of deeper integration into the global nonproliferation regime -- the removal of the defence and space entities from the Entity List, the commitment to secure Indian membership into the four nonproliferation organisations, and the rationalisation of US export controls involving India are big payoffs.

'Obama has rejected the Pakistani claim' 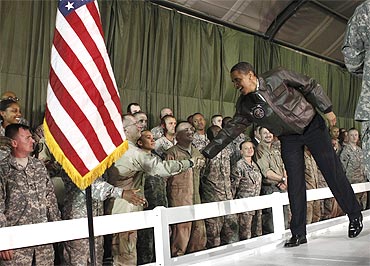 What were some of the significant developments or issues that seem to have been missed about the visit?

I'm glad you asked this question because there are two achievements that are profoundly important, which have not received the attention they deserve. The first is the Indian-US commitment to intensify and expand bilateral cooperation in, and relating to, Afghanistan. Don't overlook the significance of this fact: at the US end, it signifies that Obama has rejected the Pakistani claim that India's involvement in Afghanistan undermines the international mission in that country and threatens Pakistan -- a common assertion heard in Islamabad and sometimes in Washington.

At the Indian end, it signifies a momentous shift in the traditional Indian position which cheered the United States on in Afghanistan but sought to maintain a clear distance from Washington where any collaborative activities in Afghanistan were concerned. The consequences of this Indian shift are potentially profound, not only for Afghanistan but larger Indian-US cooperation.

The second is the India-US commitment to, again, jointly collaborate in Africa: this too is profound because whatever the Indian sympathy for any American goals in the abstract may have been, New Delhi always sought to steer an independent path in its relations with third countries. The Africa announcement, besides providing now a democratic alternative to the continent's challenges, also signifies a growing Indian willingness to partner with the United States more publicly. For those who argued that such collaboration was impossible given India's supposedly immutable worldview, I say, look again.

'The administration did the right things for the bilateral relationship' 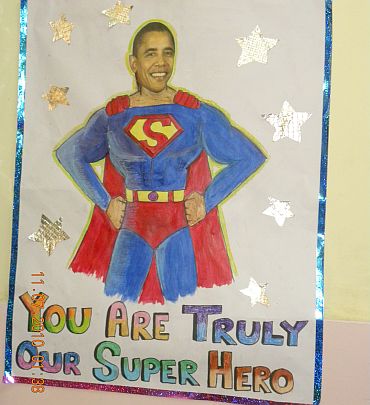 It seems President Obama thoroughly digested the CNAS (Centre for a New American Security) Study Group blueprint, of which you were a member, and your own Carnegie report in terms of some of the recommendations, all or the majority of which he endorsed or addressed during the visit.

I am gratified that many of the initiatives I championed for years -- some, like UNSC permanent membership and integration in the nonproliferation regimes, going back to 2005 -- were consummated during this visit. But the bigger source of satisfaction is that the administration did the right things for the bilateral relationship at exactly the time when there has appeared a sceptical strain in the United States questioning the value and the wisdom of investing in India. From plainly declaring America's support for rising Indian power to proving that through concrete political initiatives to expressing solidarity with India against terrorism from Pakistan, Obama came out in exactly the right place: he not only rejected the arguments offered by the sceptics that India was not worth special treatment but in fact went out of his way to demonstrate just the contrary.

'The government of India is immensely satisfied' 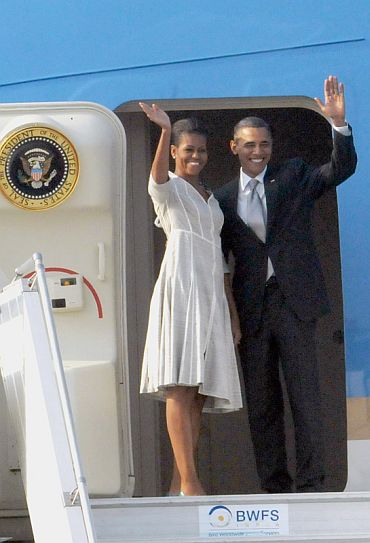 Since you are still in Delhi interacting with senior Indian officials and leading analysts, do you believe there is a sense of satisfaction on both sides that the structure is now in place vis-a-vis Secretary (of State Hillary) Clinton's envisaged India-US 3.0?

I'm still in India and hence cannot speak with certainty about the administration's perception of the visit, but everything I hear from my friends in the US government is that the President and Mrs Obama were elated both with the reception they were accorded in India and by their own experiences with different audiences, including the official interactions. At the Indian end here -- I've spent the last week trolling around -- the government of India is immensely satisfied not just with the outcomes achieved but (with) the quality of the conversations between the President and the Prime Minister (Manmohan Singh). Watching from a distance, I thought the chemistry between the two was incredible -- and it augurs well for even further progress in the years ahead.