Sign in  |  Create a Rediffmail account
Rediff.com  » News » Nothing to fear, Koodankulam will be a success, assures Kalam 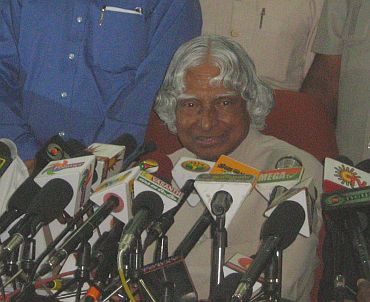 Dr Kalam assures the protestors and the country that the technology used in the Koodankulam nuclear project is the best in the world, and tries to allay the fears of the villagers over its safety arrangements, reports A Ganesh Nadar.

The relay fast to protest against the Koodankulam Nuclear Power Project entered its 20th day on Sunday at Idinthakarai, the village next to Koodankulam.

The KNNP had a very special visitor on Sunday, former President APJ Abdul Kalam, who is also a renowned scientist. He visited the plant and questioned the in-house scientists closely about the safety measures put in place for the Rs 13,000 crore Indo-Russian joint venture.

At 1 pm Dr Kalam addressed a press conference attended by hordes of journalists coming from far-off cities to this remote village. 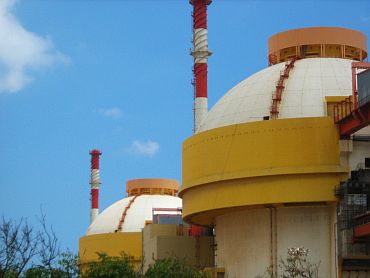 Image: The site of the nuclear power project at Koodankulam
Photographs: A Ganesh Nadar/Rediff.com

Dr Kalam said he was 100 per cent satisfied with the safety measures adopted at the plant. He informed about the double-layered thick container which housed the nuclear reactor.

Dr Kalam then went on to note that Koodankulam is in Zone 2 earthquake area and thus there was no possibility of an earthquake. "The nearest tsunami point was 1,300 kilometers away. And in the last 100 years, there had been no hurricane or cyclone here," he pointed out.

'I am not a mediator between government and protestors' 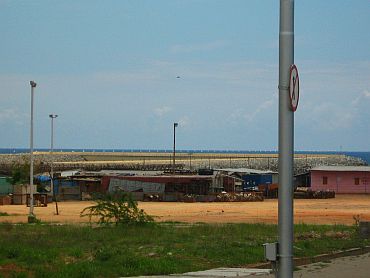 There have been widespread protests against the nuclear plant in Tamil Nadu from local villagers over safety concerns, especially after the Fukushima disaster in Japan.

Dr Kalam also said that the technology being used in KNPP was the latest one and used for the first time in the country.

He said that he had come here because he advocated the clean nuclear energy and he had no intention to turn a mediator.

He said had met 30 people from several villages surrounding the plant just before the press conference who were happy with the project.

He also said he was not going to meet the protestors but was willing to meet them if they come to him. He said he will write a series of articles in the daily papers to further allay the fears of the public over the safety arrangements put in the place in the plant.

'Half the power produced here is for Tamil Nadu' 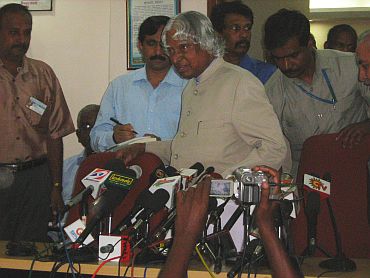 He emphasised that electricity is the absolute necessity for the nation's progress, so the protests are meaningless. "We must not forget that half the power produced here is for Tamil Nadu," Dr Kalam noted.

When asked if he thought there was a foreign conspiracy behind the protests, he said, "You must have faith, don't listen to disturbing elements."

Answering a question from rediff.com, he said, "If the explosions go out of control, the temperature will go up and the core of the reactor will melt. In which case it will come in contact with a liquid there that will absorb all the radiation produced at that time. Thus, there will be no radiation leak."

When asked about the hot steam test that the plant was put through, he said, "That was a dry run with dummy fuel. It was a success and now we are ready to start production that is going to be critical".

When told that people were petrified at the loud sounds that were emitted during the dry run, he said, "That was a one time test. That sound will never be heard in Koodankulam again, there is nothing to fear".

He reminded that the Nellaiapar temple in Thirunelveli had stood for a thousand years and had never seen an earthquake, 'so the chances of one happening here are nil.'

'Koodankulam will be a success' 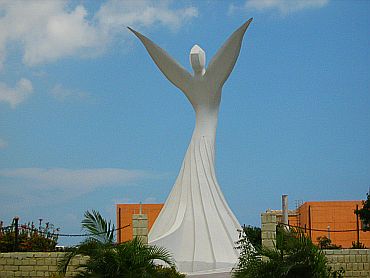 Image: In the next ten years, four more nuclear reactors would be started at Koodankulam
Photographs: A Ganesh Nadar/Rediff.com

He recalled that in 1979 when he was project director for the Rohini satellite launch there was an accident and about seven people got burnt with acid.

"One of the boys who got burnt shouted, 'Next year we will launch Rohini, come what may'. And eventually we succeeded. Likewise Koodankulam will be a success," he said.

He also noted that all safety measures were mentioned in the Koodankulam website.

A reporter asked him, "We have the second largest deposits of Thorium in the world, but why are we not building reactors to use that as a fuel?"

"That research is going on now for some years. It will take another 20 years to fructify. At that time we will phase out the Uranium-based reactors and start the Thorium-based reactors," he answered.

Talking about the time phase, he said that the first reactor of 1000 MW at KNPP would start immediately. The second 1000 MW reactor would start in six months, and in the next ten years they would start four more reactors.