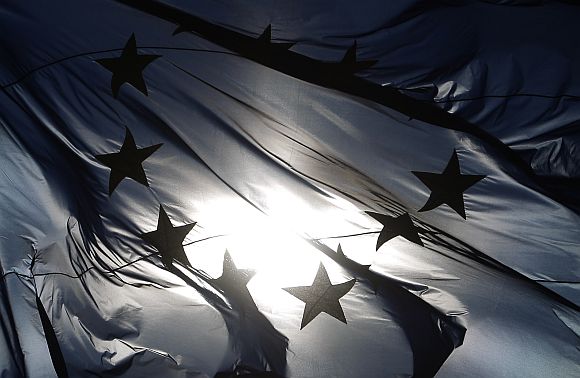 Europe's leaders have expressed delight over the awarding of this year's Nobel Peace Prize to the European Union and hailed it as a tremendous honour and encouragement for their endeavour to promote unification, amid derision from the British press which called the decision "frivolous".

European Commission President Manuel Barroso said on Friday it is a "tremendous honour" for the European Union to be awarded with the 2012 Nobel Peace Prize.

It is the "strongest possible recognition of the deep political motives behind our union: the unique effort by ever more European states to overcome war and divisions and to jointly shape a continent of peace and prosperity," he said in a statement in Brussels.

The peace prize "is not just for the project and institutions embodying a common interest, but also for around 500 million citizens of the EU," Barroso said.

'EU transformed Europe from a continent of war to peace' 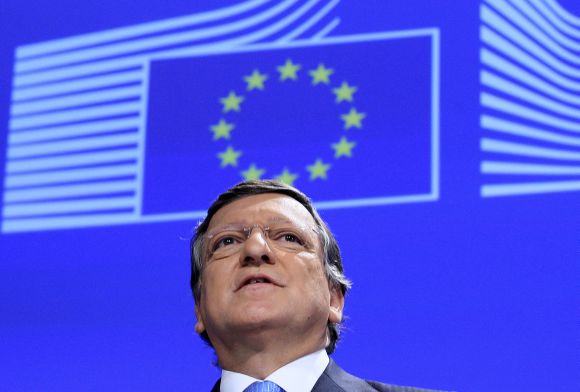 The Norwegian Nobel Peace Prize Committee announced earlier on Friday in Oslo that the EU was awarded the peace prize in recognition of its "contribution for over six decades to the advancement of peace, reconciliation, democracy and human rights in Europe."

It appreciated the stabilising part played by the 27-nation bloc that has "helped to transform most of Europe from a continent of war to a continent of peace," the statement said.

Barroso said at its beginning, the European Union brought together nations emerging from the ruins of two devastating World Wars, which originated on this continent and united them in a project for peace.

Over the last 60 years, the EU has united a continent split by Cold War around values of respect for human dignity, freedom, democracy, equality, the rule of law and human rights, he said.

These are also the values the EU promotes in order to make the world a better place for all. The EU will continue to promote peace and security in the countries close to it and in the world at large, the commission president said.

"The Nobel Peace Prize shows that in these difficult times, the European Union remains an inspiration for leaders and citizens all over the world," he said. 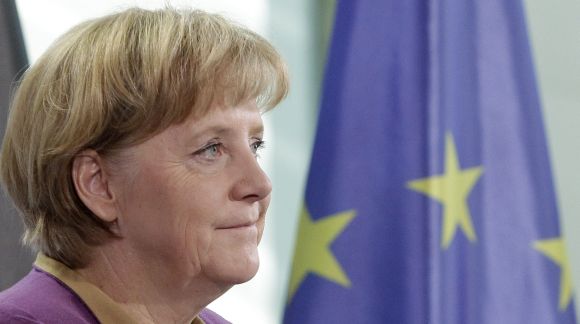 German Chancellor Angela Merkel praised the Nobel committee's decision and said the award is in recognition of the idea of European unity.

"One should not forget that in order to keep this peace, democracy and freedom, we have to work over and over again," she told a news conference.

The euro is more than a single currency because it represented the original idea of a peaceful society based on common values, she said.

The awarding of the Nobel Peace Prize to the EU "is an incentive and an obligation at the same time, also for me personally," Merkel said.

European Council President Herman Van Rompuy said the institutions and the people of the EU are proud that its efforts to preserve peace on the continent are rewarded.

The peace prize is a recognition of the work done by the EU leaders during the last six decades and the present leadership of the Union has the task to carry on this work, he said in a statement. 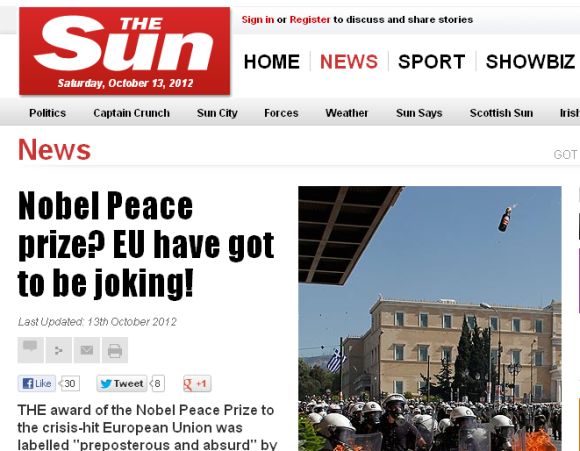 European Parliament President Martin Schulz said the peace prize is a great encouragement to intensify the efforts to promote European integration and not to deviate from the goals of the continent's first project to promote peace and security.

The Nobel committee's decision will strengthen those campaigning for closer cooperation across the national boundaries, he said.

It is also a recognition of the work by "courageous men and women" who laid the foundation for the EU by fighting for peace and reconciliation after two catastrophic wars, Schulz said in a TV interview.

However, the British newspapers poured scorn on the Nobel Committee's move to award the Peace Prize to the EU.

"EU have got to be joking!" the Sun tabloid said, while Daily Mail called it: "Nobel peace prize for idiocy".

The Times described the award "frivolous" and the Daily Telegraph said in an editorial that the decision "prompts, above all, one question: is it too late for Alfred Nobel's heirs to ask for their money back? The greatest service it has done is not to diplomacy, but to comedy."

Only The Financial Times backed the award, saying it "rightly recognises a historic feat".