No differences with Hazare and his team: Ramdev 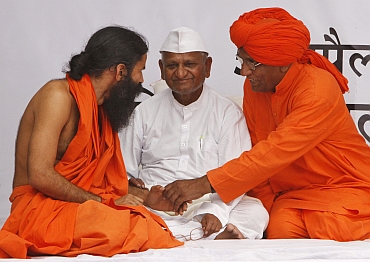 Yoga guru Baba Ramdev on dismissed suggestions of a rift with the Anna Hazare-led team and said he has asked his supporters to join the day-long fast by the social activist and his aides in New Delhi on Wednesday.

"We are with them (Anna Hazare-led group). There is no difference between Anna and me," Ramdev told mediapersons in Haridwar. He was responding to suggestions that there was a rift between him and the Anna Hazare-led team.

"Thousands of our activists will go to Delhi to participate in the Anna movement. We do not have any hope with this government. It government has stifled the Lokpal Bill movement," he said.

Hazare and other civil society members of the Lokpal drafting committee will sit on a day-long fast to protest the crackdown on Ramdev's fast against corruption at Ramlila Maidan on Saturday night.

'Will fast till the whole country is up against corruption' 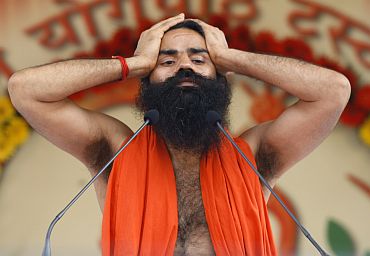 Ramdev said he will not end his fast till the government accepts his demands to curb corruption and black money.

"Our fast is on from June 4. There should not be any confusion about it. It will continue till this whole country is up against or united against corruption and black money. We are doing satyagraha to wake up this government. If they don't wake up then there will be protest. There will be huge protests in the whole country," he said. 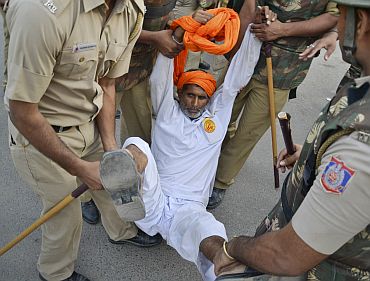 The police is not cooperating, in fact, they are threatening our men against lodging complaint against brutality. We may take five to seven days to get the details of atrocities meted out to these innocent people," the yoga guru said.

It is very unfortunate that the police restored to lathi charge against "innocent people, children, men and women at Ramlila Grounds," he said.

"They were brutally beaten up. This has not happened even when the British ruled us," he said.

"Our activists are already fasting and are on fast in 624 districts of the country. Our fast will continue but I have asked small children, sick and very old people not to undertake it," he said.

Ramdev said the government should not "threaten him and his followers against holding peaceful protests, failing which, it would result into a mass movement against the government's unconstitutional behaviour."

'Ready to go to jail if govt does not accept demands' 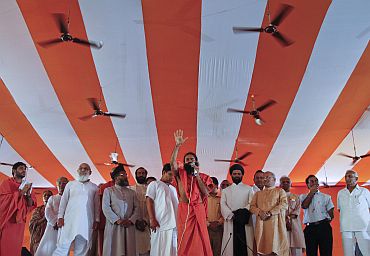 Referring to police action at Ramlila grounds, he said there was a conspiracy to kill him that night. "We are ready to go to jail if government does not accept our demands. The more the government tries to hide the truth, the stronger will we emerge to fight it," he said.

"We have come here to extend our support to Baba Ramdev. Englishmen have left us but black Englishmen (kale angrez) are now ruling us," said Singh's relative Abhay Bhagat.