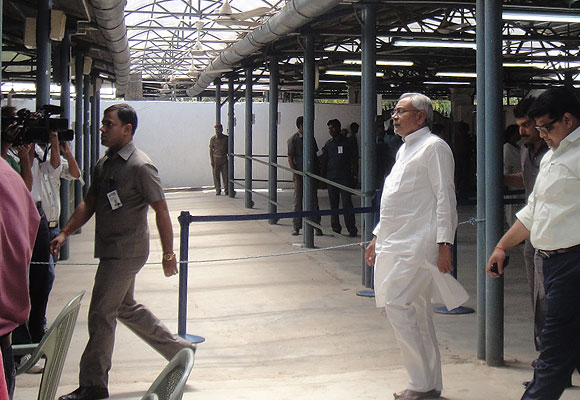 'In Gujarat, the system is such that even if Narendra Modi is not there, growth will continue. But in a place like Bihar it is different, it will still matter who is the CEO of the state,' social scientist-economist Dr Shaibal Gupta tells Rediff.com's Archana Masih in Patna.

Gujarat doesn't need an icon because its system is so powerful and functional that it will continue to grow without any icon, explains Dr Shaibal Gupta, a leading social scientist and economist and member-secretary of the Asian Development Research Institute in Patna, Bihar.

"But in a place like Bihar it is different, because Nitish Kumar will mean one thing, somebody else will mean a completely different thing," says Gupta, who is also a member of the Bihar government's finance commission and a well-known commentator on Bihar.

"Nitish Kumar has become the face of Bihar and is the main trigger of change. But there is a limit to individual initiative."

In a detailed conversation with Rediff.com's Archana Masih, Gupta says although Chief Minister Nitish Kumar is building the state structure, in Bihar's context, the most crucial agenda was not bijli, sadak, paani, but land.

If the Bihar government wants to build the edifice of the state in a substantive manner, it needs to address its land-related issues first -- something states like Tamil Nadu, Maharashtra, Punjab etc -- accomplished 40, 50 years ago.

You had said in an interview a few ago that Bihar needs an icon, do you think that has been achieved under Nitish Kumar?

Nitish Kumar is definitely an important icon who has emerged in the last couple of years.

In Bihar the problem is that the changes that are taking place are essentially Nitish-centric.

Yes, he has become the face of Bihar.

He has become the face of the state and he is the main trigger of change. But there is a limit to individual initiative.

He is building the state structure. I think he will be able to do it in the next couple of years if he is allowed to control the destiny of the state, but his hands have to be strengthened. He has to take up so many agendas.

In Gujarat, the system is such that even if Narendra Modi is not there and you are CM, the growth will continue.

Modi may have given some emphasis on certain things, but the growth process has been there for the last 200 years, not only during the post-Independence period. Even before Modi, the BJP had won elections there twice, this is their fifth victory.

In a place like Gujarat you possibly don't need an icon, the system is so powerful, so functional -- by system, I mean the institutional memory of governance -- that it will continue to grow without any icon.

But in a place like Bihar it is different, it will still matter who is the CEO of the state because Nitish Kumar will mean one thing, somebody else will mean a completely different thing.

When the system starts functioning autonomously, possibly then you don't need an icon of that nature.

'Lalu represented the Cockney-nisation of politics' 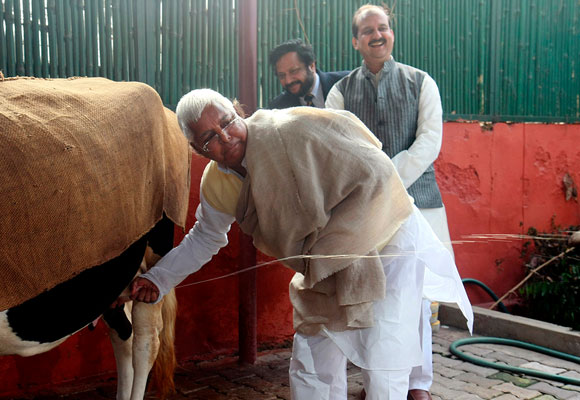 How has Nitish Kumar managed to get the bureaucracy to work along with him?

It was difficult, as well as easy. In the sense when Lalu (Prasad Yadav) became chief minister, Bihar was the ultimate state as far as electoral democratisation was concerned because a new set of political people emerged who were not in a position to interact with the functionaries of the state.

Usually the functionaries of the state will use the grammar of the Eurocentric model of discourse (having a European perspective). If you see the post-Independence period, the type of leadership which governed the state were the traditional elite.

Nehru was a typical example of the traditional elite who represented the landed elite or essentially the professionals.

This changed when Lalu came. Lalu represented the Cockney-nisation of politics. This group were either on the fringe or outside, it was a totally new thing and when they emerged there was some sort of dialogue of the deaf between the state and political functionaries.

So in the process, the functioning of the state completely collapsed. When Nitish came to power, he turned to restore this dialogue. It was not very difficult for him because the coalition which brought him into power was a coalition of extremes, which means, he had a substantive section of elite along with the Dalits.

When he came to power, the functionaries of the state thought that Nitish is part of our social base, so he got immediate support.

But when Nitish came to power he also felt that the state is not a functioning state. It has to be resurrected and built in a new manner.

Secondly, he felt that democratisation has taken place of which he was also a part of because the social justice movement in Bihar was co-scripted by Lalu and Nitish in the late 1980s and 1990s.

Later they (Lalu and Nitish) parted on different political grounds, he (Nitish) felt that people who got democratisation should become part of the governance structure.

The consequence of this was that the lowest centre of power which was controlled by the traditional elite even when Lalu was at its helm, that power structure was getting eroded.

Nitish was able to break the lower power structure. In the process there is a section of the upper caste, the traditional elite that is up in arms against this government.

I won't say there is a dialogue of the deaf between the state and him, but the initial honeymoon of the traditional elite has substantially decreased. 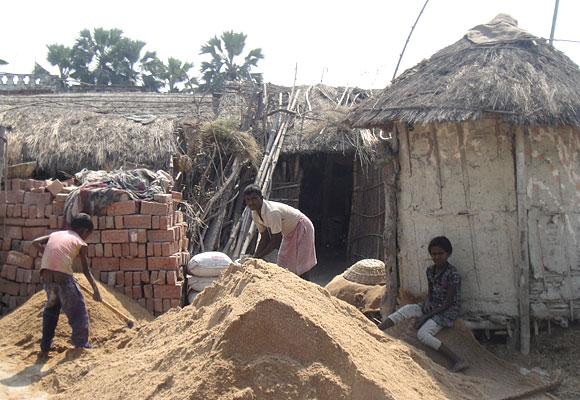 I don't believe that in any state these three things are most crucial. Of course, these are important but there are some agendas that are more important than these.

Normally people will identify this agenda in a grand manner because then you divert the attention of the people from the main problems.

In the context of Bihar, the most important agenda is land management.

In Bihar, the most important challenge the government is going to face is related to land management and to implement this we need a lot of political willpower.

Even though Jharkhand is the most mismanaged state in the country, with no political stability, they have been able to build huge roads because resource is not a problem.

In Jharkhand, governance is a problem, resource is not.

So Bijli, sadak, paani are essentially a problem of resources, but when you see land-related, land management issues, these are not only resource related problems, but political and ideological problems.

The Bihar government has not been able to address this in a significant manner.

If you want to build the edifice of the state in a substantive manner, you need to address this first.

Secondly, until and unless you know exactly how many people are dependent on land -- if you are able to do consolidation of holding, then you can work out some sort of techno-managerial strategy on agriculture.

We are not able to do this in a proper manner and have not been able to address the institutional strategy for land- related issues.

This is a major problem. Bijli, sadak, paani can be taken care by anybody if there are resources.

Not only in Bihar alone, but roads have improved in most parts of India. This is one change that seems to have taken place across the country.

What I am trying to say is that bijli, sadak, paani are class neutral. Nobody will say don't solve these. It is easy to solve class neutral problems if you have resources.

If resources are available, we will be able to solve this. For a place like Bihar you will have to address the institutional problem and that is related to land.

Most of the developed states of the country -- Tamil Nadu, Maharashtra, Punjab etc -- have solved their land related problems 40, 50 years ago. In south India, the rural area is relatively less iniquitous, but this is not the case in Bihar.

In the neighbouring state of Uttar Pradesh, the land availability of the Dalit is much more than Bihar because land reform was taken up by Charan Singh (the former UP chief minister and fifth prime minister of India) decades ago.

You cannot build the edifice of the state in a substantive manner unless and until you take care of this because the institutional problem of land is the real foundation of state building, that's the biggest challenge.

Part 2 of this interview: 'Nitish Kumar is a darling of the national middle class'