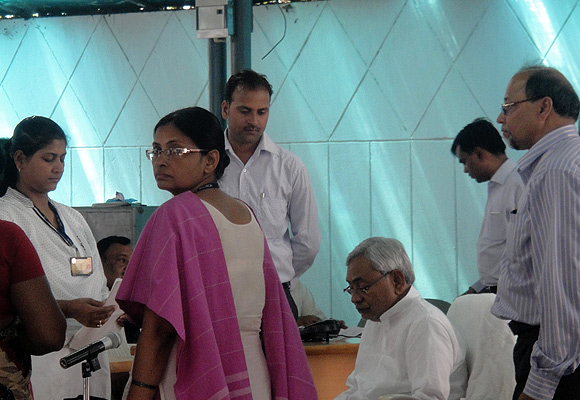 'His image may have gone down a little because he is talking about poverty and underdeveloped states. That is not the way to sell yourself nationally,' Bihar's best known economist and social scientist Dr Shaibal Gupta tells Rediff.com's Archana Masih.

For the first time, the chief minister of an under-developed state, who also has a better image, is claiming better devolution of resources from the Centre, feels Dr Shaibal Gupta, head of the Asian Development Research Institute in Patna. 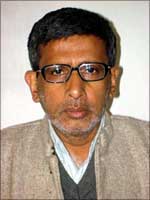 Dr Gupta, left, a long-time observer and commentator on Bihar, maintains that although the basic principle of reform is dismantling the state, Nitish Kumar is talking about building Bihar.

In the second part of his interview to Rediff.com's Archana Masih, Dr Gupta explains the logic behind Nitish Kumar's demand for special status for Bihar, the resurgence of Bihari identity and the challenges confronting the chief minister.

Part I of the interview: 'Nitish Kumar is Bihar's main trigger of change'

Under Nitish Kumar, Bihar's image changed, and it appeared that the state was anxious to shed its BIMARU tag, but by the demand for special status, its backwardness is again being projected?

When Nitish came to power the country was in a state of elation because they thought Lalu Yadav has been marginalised and the Lalu phenomena will not be replicated in the country.

The Lalu phenomena means the class which he brought forward, many in the country were worried that the Lalu type of democratisation should not be extended to other parts of the country.

Nitish slowly and proactively promoted the agenda of social justice with much more dexterity and capability.

One of the things he did was because he promoted the coalition of extremes from the class angle that class base helped in building initially the idea of sub-nationalism in the state.

So suddenly the Bihari identity got a new meaning.

(Earlier) Many elites, many IAS officers who were Bihari, would not reveal their identity. They would say unfortunately we are from Bihar. At that time we (the Asian Development Research Institute in Patna) were one of the few organisations that actively promoted the agenda of Bihar and sub-nationalism.

When Nitish came to power, he co-opted this agenda in a beautiful manner, so suddenly the Bihari agenda got a national and international boost and the entire Bihari Diaspora practically rallied behind Nitish.

'Bihar is at one end and Gujarat at the other' 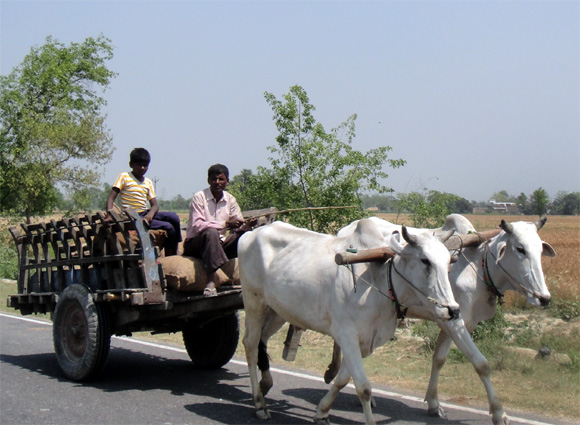 But the problem of the Indian strategy is that for the development of Bihar we have to depend on public sector investment and that is why we are talking about special status because Bihar is landlocked with poor infrastructure and cannot depend on private investment.

That is why we are talking about special category status and about new pre-conditions for devolution of resources from the Centre.

This is not only limited to Bihar. Nitish has been able to extend it to other backward states as well.

Now this is not being liked by the national elite or the national power structure because there are two problems -- for the first time the chief minister of an under-developed state is claiming better devolution, who also has a better image.

This was not so couple of years ago and when Lalu used to ask for better devolution people used to say he has no image. This is not the case with Nitish, so that became a matter of concern for the national elite.

Nitish has been able to promote many agendas that are class neutral. About special category status, he says it should be given to all backward states.

Nobody will object to that, but suppose he had said land reform should take place in all the Hindi heartland states that would have created problems.

Because he promoted a class neutral agenda it becomes a difficult proposition for the central government to refuse.

That also becomes the reason why his image is being systematically sullied because if his agenda succeeds, then the metropolitan-centric, economic strategy of the Government of India will be challenged because in the post-Independence period it (the Centre) has been mainly industry-centric, urban-centric.

In the process duality has taken place and two extremes of that duality are Bihar at one end and Gujarat at the other.

'Nitish has brought the subaltern to the centre-stage of governance' 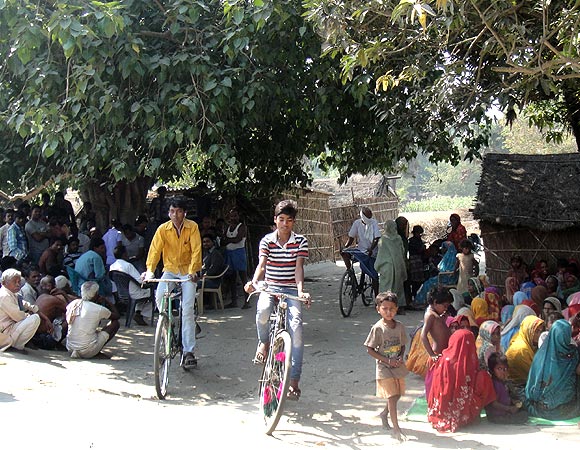 After 7 years of Nitish Kumar in power, there has been improvement in areas like roads, school enrolment, agricultures, but Bihar is still very poor in power, private investment and industry.

The most important activity of the state is that it has been able to identify the problems.

There is a thrust on social development. These are esoteric agendas which cannot be completed in the next couple of years. It takes years before you can see something tangible.

One of the most distinctive components of the Bihar development strategy is that while they are taking up the agenda of developing the state or controlling law and order or taking up other aspects -- for example, the Bihar government has staked its political career by saying that if they are unable to provide energy by 2015, they will not fight the 2015 election.

These are very difficult things. What it has distinguished itself in the last couple of years is that it has given sufficient emphasis on the social sector -- health, education.

The second most important thing is that in the previous regime of Lalu Yadav and otherwise also, in Bihar some sort of electoral democratisation has taken place for a long time.

But during Nitish Kumar's period what he has done significantly is that he has brought a section of the subaltern or the marginal people to the centre-stage of governance, especially in the third tier, in the Panchayati Raj institutions.

Earlier, people thought they have been given a voice -- people who were not allowed to vote even two decades ago. But they are now increasingly becoming part of the governance structure.

In that sense, a democratisation has taken place in Bihar in a much more substantive and authentic manner. That is an important agenda that they have been able to achieve.

But if you see the challenges, there are many agendas they have been unable to accomplish. That depends on finance and resources. Our internal resources have increased, our tax-GDP ration is still quite stagnant. Because of the deceleration of the economy at the international level, the resource transfer also got lessened.

The biggest challenge is how to generate resources, how to get resources from the Centre.

'The challenge is to build an entire state' 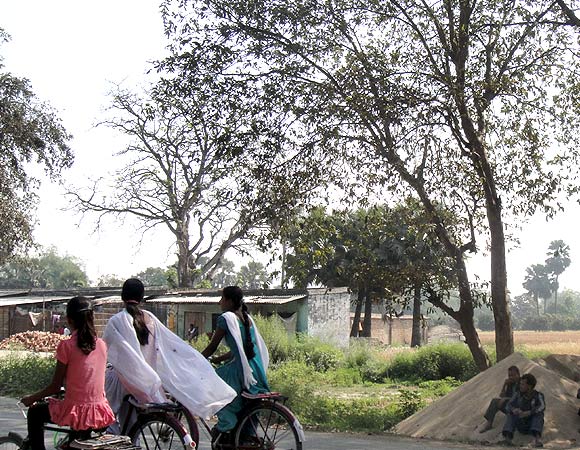 One of the agendas for getting special category status is that not only will funding increase but possibilities of private investment will also increase.

A state like Bihar which is landlocked, without electricity and many other historical problems, cannot be an automatic destination for investment.

So to ensure appeal for Bihar, special category status -- maybe some kind of strategy -- to attract private investment. The challenge is to build an entire state, build the entire infrastructure.

In a landlocked state, connectivity is crucial. Our roads have improved, we have built many bridges because Bihar is a riverine state, but now it is not a question of building roads.

People will be comparing whether you have 4 or 8 lane roads, which is still unthinkable in the context of Bihar.

There are many unfulfilled agendas that Bihar will have to take up in a couple of years.

What do you see Nitish Kumar's role in the 2014 general election?

He will be an important player, not necessarily as prime minister but his say will be there in deciding who is going to be the PM. His role will be very significant in deciding which will be the ruling coalition.

He is one of the very few who has become some sort of a darling of the national middle class.

His image may have gone down little because he is talking about poverty and underdeveloped states. That is not the way to sell yourself nationally.

Normally you talk about national, international, economic, industrial grid -- how you are connected with the world, how you are talking about reforms.

Reform means what? Essentially the basic principle of reform is dismantling the state, but the CM here is talking about building the state.

You want to dismantle the state where it is already functioning, is performing and has already performed, but in Bihar where the state has not functioned at all you will have to build the state.

Even for bringing private sector investment you need a very robust state. These are the things on which the future agenda will have to be decided.