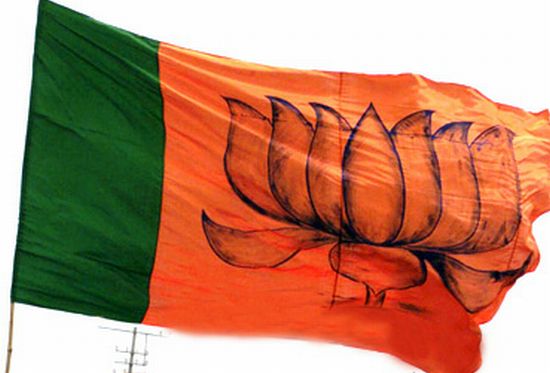 The Bharatiya Janata Party is pulling in different directions on the kind of role Gujarat Chief Minister Narendra Modi should play in the future even before the issue has come up for discussion in the party fora. Neerja Chowdhury analyses.

That the BJP is at war within itself is now out in the open. The tussle is not just going on inside the party, and has not left the Sangh 'parivar' untouched.

The polarising factor is Gujarat Chief Minister Narendra Modi and the event that intensified the tussle was the party's Mumbai national executive meeting, which was virtually hijacked by Modi, fuelling speculation whether he was readying himself for a larger role with the blessings of the Rashtriya Swayamsevak Sangh brass.

The fat was in the fire when the Modi-Nitin Gadkari truce became evident, between two leaders who had openly been at loggerheads for a year. Modi's boycott of the BJP's Delhi national executive and his decision not to campaign for the Uttar Pradesh assembly elections were only the tip of the iceberg.

Though not prepared to endorse Modi as the BJP's prime ministerial candidate at this juncture, the RSS allowed him to use the Mumbai session to strengthen the impression that he was the leader of the future, when it agreed to his unyielding demand to show the door to rival Sanjay Joshi.

Also discuss on ZaraBol: Will Narendra Modi make for a good Prime Minister? Tell us NOW! 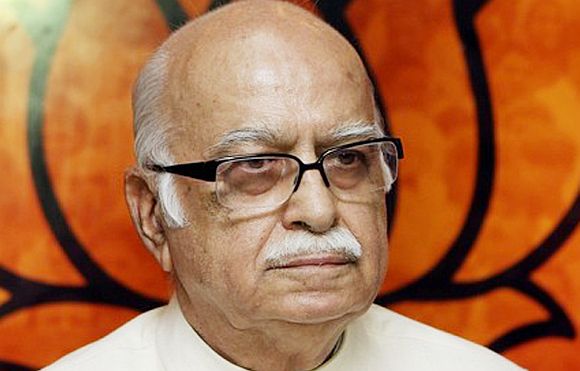 RSS chief Mohan Bhagwat is learnt to have given his green signal at the crack of dawn on May 24 -- the first day of the Mumbai session -- that Sanjay Joshi was to be axed to forge a wider unity. But, as things have turned out, it has ended up unleashing a reaction, dividing the party right down the middle.

Since Mumbai, the party has been buffeted around by a series of attacks and counter-attacks involving Modi.

Senior leader LK Advani's blog, which came soon after the Mumbai meet, was openly critical of the decisions -- Karnataka, Jharkhand, Kushwaha -- made by the party, and though his target was Gadkari, Advani was obviously unhappy with the latest line-up that had emerged, of a new Modi-Gadkari-Arun Jaitley axis.

Advani had made his unhappiness evident when he remained aloof at the Mumbai meet, and failed to attend the public meeting at the end of the executive.

Advani's blog signified that he, and others who support him in different states, and those who want to fire off his shoulders for their own reasons may not take things lying down. 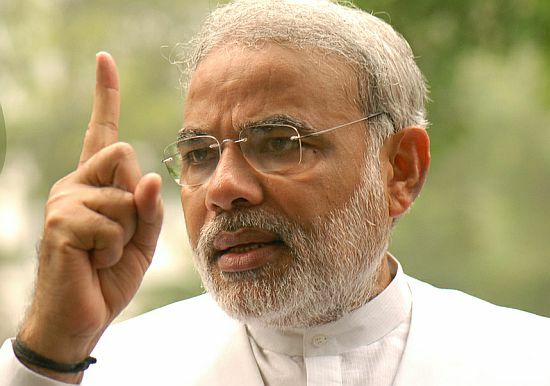 Next came the write-up in the BJP mouthpiece Kamal Sandesh, which was another reaction to the Mumbai line-up. The editorial launched a veiled attack against Modi, former Rajasthan chief minister Vasundhara Raje Scindia and former Karnataka chief minister B S Yedyurappa, without naming them, for becoming larger than the party.

The three, who are considered mass leaders, are now moving in step, though there was a time when Scindia would openly take potshots at Modi. The Kamal Sandesh piece was done by Prabhat Jha, who is believed to be close to a group within the BJP but also to Suresh Soni who acts as the bridge between the RSS and the BJP.

This also showed that not all sections in the RSS were pleased with the turn of events at Mumbai.

Soon thereafter, another salvo -- an article in the RSS in-house journal Panchjanya also critical of Modi's style of functioning, though more nuanced -- was fired. It cautioned Modi from coming across as an intolerant leader, unable to take everyone along. (There had been reports that Modi was planning to prevent Sanjay Joshi from travelling all through Gujarat by train.)

The Panchjanya piece, written by Devendra Swarup, an RSS ideologue whose views are taken seriously in the Sangh circles, reflected the dominant thinking inside the RSS that it may not have an option but to consider Modi for the top job, as he seems to be the only vote-getter of the party, but that he would have to be reined in, and take everyone along. 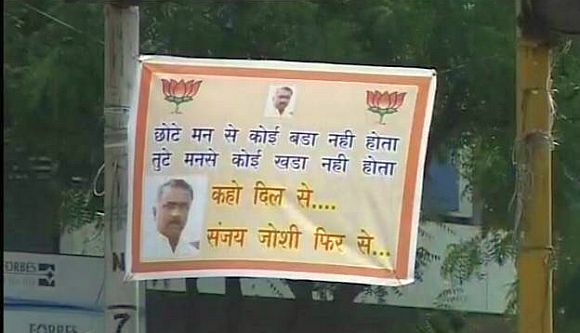 So, for the moment the Sangh may like to wait and watch and see how the situation develops before coming to a final conclusion.

Some believe that the Sangh deliberately allowed Modi to overshadow the Mumbai meet because it will help him in his battle in Gujarat. An internal survey done by the party is supposed to have revealed that 2012 may not be as much of a cakewalk for him as the last two elections were.

The Panchajanya piece brought on a counter attack -- ironically also in another mouth piece of the RSS, the Organiser -- in defence of Modi, eulogising him and comparing him to Atal Bihari Vajpayee.

However, the difference between Modi and Vajpayee is apparent. The moderate Vajpayee had been an umbrella presence, unifying different sections in the BJP, and bringing into the party fold non-party voters, while hardliner Modi has already polarised his own party right down the middle.

From articles and editorials, the war has now moved to posters. Many posters have come up in Delhi and Ahmedabad, praising Sanjay Joshi, and they were being pulled down at the party offices.

Clearly, the BJP is pulling in different directions on the kind of role Modi should play in the future, even before the issue has come up for discussion in the party fora. 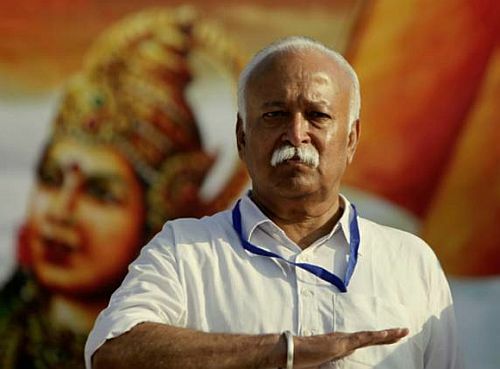 Through the attacks and counter-attacks, what is becoming increasingly clear is that Gadkari is the man the RSS trusts today.

Gadkari is not yet home and dry though the national executive cleared a change in the party constitution -- to be endorsed by the national council later this year -- to allow the party president a second consecutive term. Though an enabling provision, Gadkari is yet to be formally elected and may not like to antagonise people beyond a point in the coming weeks.

It is also becoming evident that RSS chief Mohan Bhagwat, who has played the Gadkari card, is increasingly calling the shots in the party today. There are also signs of a reassertion by the Marathi-Brahmin lobby in Nagpur.

Advani is already beginning to play the role of a mentor, with his blog and letter to the prime minister about changing the process of selecting the CEC.

For a beleaguered Congress, what is happening in the BJP comes as good news. If there is a determined group fighting Modi in the BJP, the Congress can bank upon invisible allies helping it.

Also discuss on ZaraBol: Will Narendra Modi make for a good Prime Minister? Tell us NOW!

TOP PHOTO features of the week