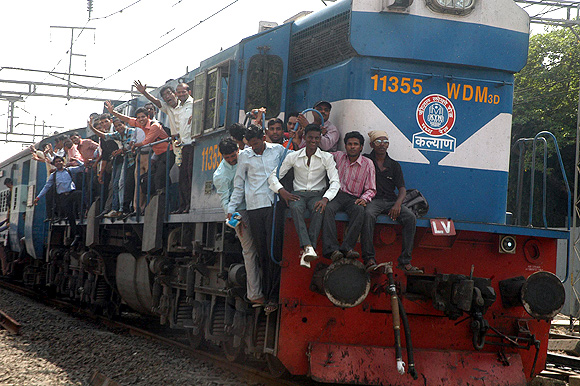 Two persons leaning precariously from a jam-packed coach of a suburban train were killed and 15 others injured as lakhs of Mumbaikars continued to have an agonizing time with services on the Central line remaining in complete disarray for the second day on Thursday.

Two passengers on Badlapur-CST local train met a tragic end when they crashed into an iron pole alongside the tracks between Nahur and Bhandup stations. Several people,
clutching at the window grill while standing close to the door, fell down with them in a heap beside the tracks, police said.

While the crash proved fatal for the two, 15 others have been admitted to the Rajawadi Hospital.

Chief Public Relations Officer of the Central Railway V A Malegaokar said the tragedy was the result of "extreme overcrowding" of the trains. 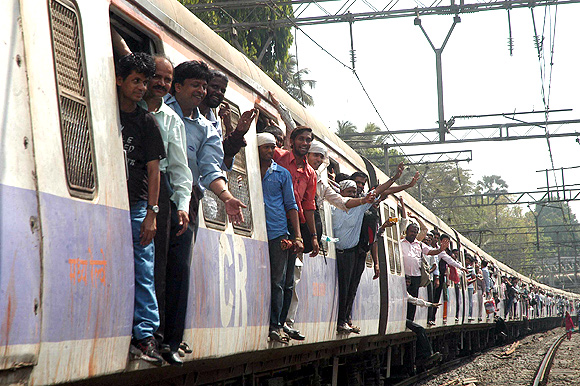 "The trains are extremely overcrowded and there are no violations of norms by the Railways," he said, adding efforts were on to operate 85 to 90 per cent trains.

Train services on the Central and Harbour lines have been thrown out of gear since Tuesday midnight after a fire in a signal cabin between Kurla and Vidyavihar stations caused heavy damage to signalling gears.

Nearly 40 lakh passengers travel every day by 1,578 trains on the two lines.

According to sources in the Central Railway, it would take at least 24 more hours to fully repair the damage before normal traffic is restored.

As the authorities raced to set right the fault, Mumbaikars continued to face a harrowing time. 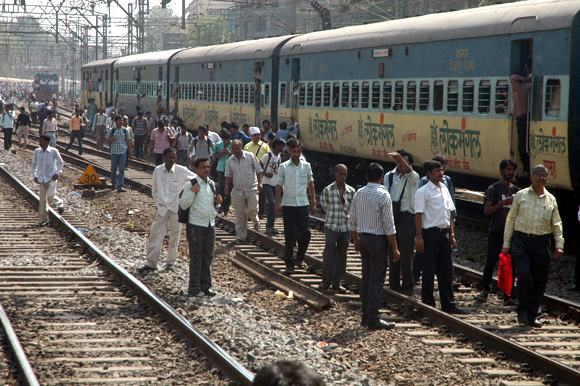 While trains, choc-a-bloc with commuters, are running late by 40 minutes to an hour or more, the Eastern Express Highway linking Navi Mumbai to the city and roads connecting eastern suburbs with south Mumbai are witnessing huge traffic snarls.

Many people brought out their own vehicles and hired autos and taxis to reach their offices.

Scores of people could be seen sitting atop the trains under a blazing sun to reach their places of work as the locomotives moved at a snail's pace.

Trains queued up on the tracks are being cleared slowly at each station as signals are being operated manually.

Trying to make a quick buck, taxi and autorickshaw drivers were charging hefty sums from the commuters, many of whom travelled to stations on the western line to catch trains to reach CST and Churchgate stations in south Mumbai.