'People were lying in a pool of blood' 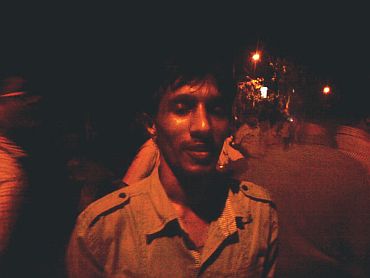 Prasanna D Zore speaks to eyewitnesses in the Opera House area, one of the three blast sites in Mumbai.

Vikrant Bhalerao, a resident of Ambewadi, ran out of his home as soon as the news spread of a bomb blast in the neighbouring Opera House area on Wednesday evening.

He heard the huge bang in his home which is just 100 metres away from the blast site. Within three minutes, he says he had reached the spot and was left numb with what he saw at the scene.

"People were lying in a pool of blood with a couple of them badly injured, without limbs," he says, recalling the horror.

'We used tarpaulins as makeshift stretchers to ferry the injured' 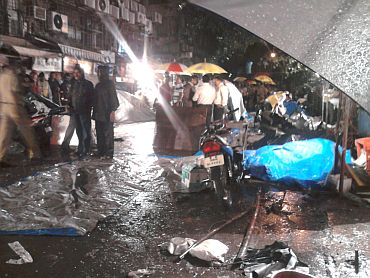 "There were no stretchers available immediately, so the people who gathered around tore down tarpaulin and cloth from adjoining shops and made them into makeshift stretchers to ferry the injured to the nearby Saifee Hospital," Vikram Bhalerao says, without a pause.

A section of the Saifee Hospital lies close to the blast site.

As Opera House area is the hub of Mumbai's diamond trade, Bhalerao says there is a possibility that most of the victims were diamond traders. He says he ferried more than 14 people in tarpaulin to the hospital.

"We had no time to react. It was important to take the injured for treatment," he says, his facial muscles twitching and body shivering.

'I am thankful to God that I survived the blast'

Pawan Kumar Jha, a security guard in a building opposite the site where the blast took place, is shaken. Had it not been for divine blessings, he says, he would have been one of those injured in the blast.

Sitting in his chair on the first floor of the building next to the blast site, he stood up just in the nick of time to offer his pooja. He points out the broken shards of glass that lay scattered around his seat.

"I was lucky to have survived the blast," he says, thanking God profusely for his blessings. 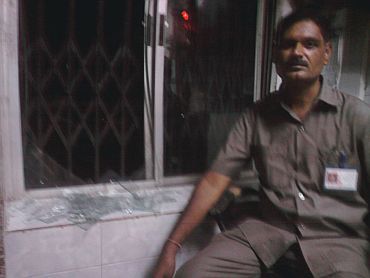 "The mood on the street, however, was one of anguish and resentment as politicians made a beeline mouthing the same platitudes: 'We salute the spirit of Mumbaikars, we must take a stern action against the perpetrators of such cowardly acts, the neighbouring state (Pakistan) is behind these blasts, etc'," he adds.

For how long should we bear such attacks? Why has Mumbai become such a soft target?

Weren't the Mumbai police caught napping as the blast happened just two days after the fifth anniversary of the 7/11 serial train blasts?

What encourages the terrorists to strike at will? Is the government serious about tackling the issue of terrorism?

These are some of the questions in the minds of ordinary Mumbaikars that the government, intelligence agencies and the police must answer.