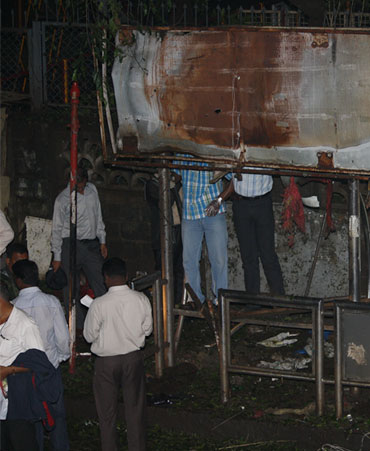 Savera R Someshwar reports from Karbutarkhana, Dadar, the location of the third blast in Mumbai, and Sushrusha Hospital

Between the intermittent rain, and a blackened bus stop, one fact stood out.

The blast in Dadar, one of the three that shook Mumbai on the evening of July 13, took place in front of an educational institution.

Barely half an hour earlier, children had been happily streaming out of the gates of St Antonio Da Silva High School and probably waiting at that ill-fated bus stop for a public transport bus that would have taken them home.

'There was a loud sound, then a shudder' 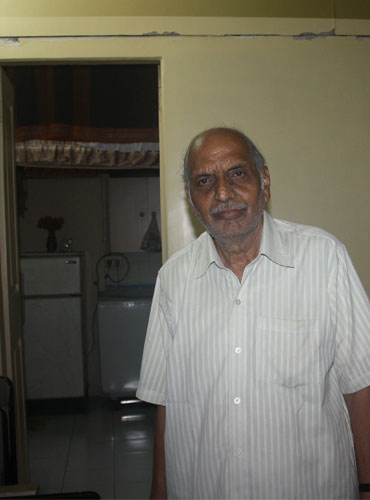 Just across the bus stop, an a building that is more than 50 years ago, 68-year-old Ravindra Ramchandra Sohini, attempted to recover from what would have otherwise been a peaceful evening spent in front of the television set.

"There was a loud sound, then a shudder," says the retired government employee. "Even the people in the building behind us heard it."

At first, the Sohonis thought their building, where they had been living for over 41 years, had collapsed. Sohini immediately shut the television.

"I didn't want any problem with that," he says. 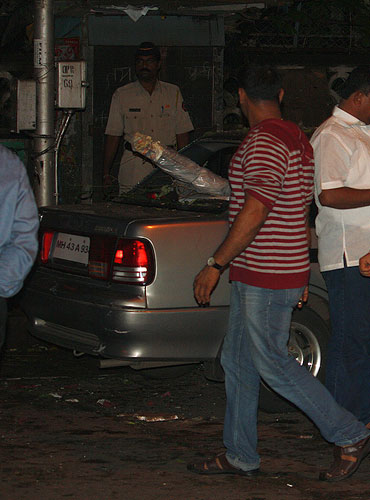 Fearfully, they looked out -- the Pandit Nivas building has an old-fashioned layout, where the flats open to long common passageway, similar to chawl system that was once prevalent in Mumbai. "There was a lot of smoke."

Within 10 minutes, he says, the place was crawling with policemen. "I saw them rushing two or three bodies away," he says.

Downstairs, Meenakshi Anjarlekar hangs on to any scrap of information she can get.

"I did not even step out of the house when I heard the blast," she says, adding, "I was too scared. What if it was another bomb?"

She refuses to step out of the relative safety of the building's entrance. As we leave, she still stands there, in the rain, waiting for more information.

'This, probably, was the last thing they expected would happen' 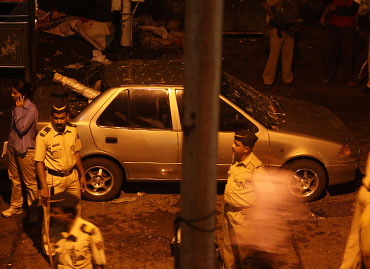 Dr Mayur Chavan, who was returning from the market, thought the blast was part of some noisy celebration at the St Antonio Da Silva High School. Then he saw the scattered steel tiffin boxes and the damaged bus stop.

Street vendors, say the locals, had been using the roof of the bus stop to safely store their belongings.

This, probably, was the last thing they expected would happen.

Eye witnesses say they saw a bike fall in the aftermath, spilling its rider and the lady riding pillion.

The cops were initially suspicious about the car 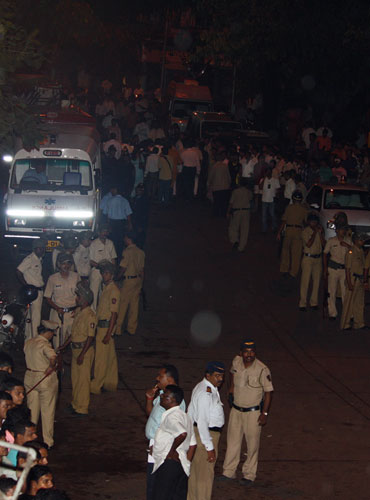 Bystanders say the driver, as well as the two passengers in the backseat were injured and had been taken to KEM Hospital.

The cops were initially suspicious about the car, which had Navi Mumbai licence plates.

Some of these vehicles had been stolen from Navi Mumbai. 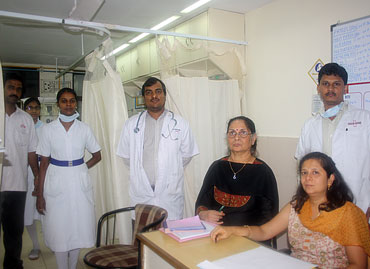 Meanwhile, in the nearby Sushrusha Hospital, two victims of the blast were receiving from their injuries.

Blosssom Rodrigues, 29, who was walking home from Dadar station with a friend, and Nikhil Chowdhury, the son of a police officer had been admitted with splinter injuries.

Both, said the intensivist Dr Sanjay Bharati -- who examined them with his colleagues, Dr Rajashri Kelkar and Dr Utture -- are stable and have suffered minor injured.

They will, though, be monitored overnight.

Chaos in the air 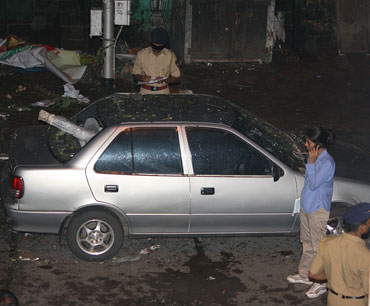 "The fire department officials," said the hospital's dean, Dr Rekha Bhatkande, "came to inquire about Mrs Rodrigues's friend. She may have been admitted at KEM.

The heavy blanket of night settled in, but the area was still in turmoil. Eager bystanders were waiting for the latest tidbit of gossip or information to be mulled over. The police wanted the area cleared. The media, with nothing much happening, were playing a waiting game. A fire truck rolled past.

And then, young Kushbhoo Shah stepped out of Jayendra Bhavan and beckoned to a cop wearing a riot helmet. "We need to throw some glass down," she told him calmly.

"The glass has broken," she explained, "and it will fall."

"So just pick it up and keep it in a corner," he told her, angry and exasperated.

Another VIP has arrived... 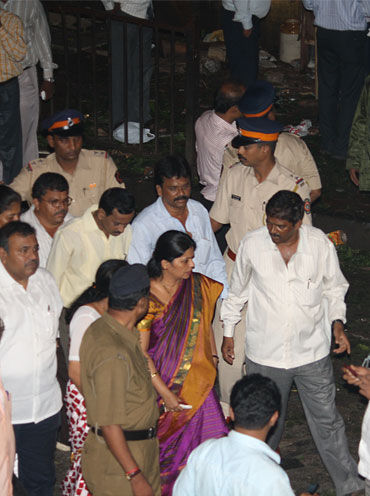 Finally, as the teenager explained further, the confusion cleared.

Glass had shattered on the third floor of building, had fallen on the parapet protecting the second floor. At any point, it could rain down on the unsuspecting bystanders below.

The area was quickly cleared, and much to the consternation of those standing nearby, there was a hail of glass shards.

It caused a bit of excitement, which was quickly replaced by the wail of siren.

Necks craned; everyone wanted to be the first to see the new VIP visiting the site.