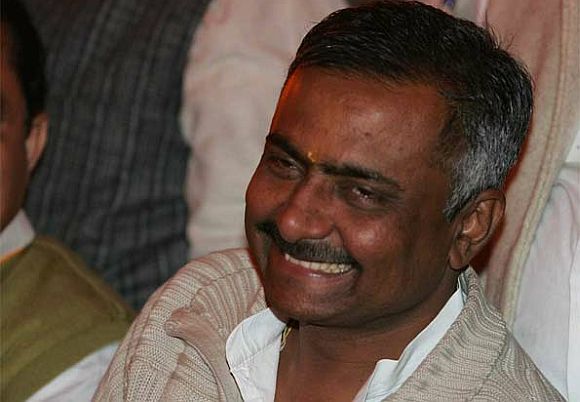 Narendra Modi and Sanjay Joshi's enmity has acquired legendary proportions in Gujarat for more than a decade. Joshi is much younger than Modi, but both men have been unforgiving to each other.

Once more on Thursday, May 24, Modi check-mated Joshi, who was forced to resign from the Bharatiya Janata Party's national executive.

Although it was decided a week ago between Rashtriya Swayamsevak Sangh and BJP leaders that Joshi would resign from the national executive to pacify Modi, the former didn't leave quietly.

He resigned only when the matter reached its climax and media attention was raised to its maximum potential. Joshi also acquired the halo of victim.

Joshi, more famously known in the Sangh Parivar in Gujarat as Sanjay bhai, is a quiet, non-quarreling, political worker.

If Modi in his early days resembled L K Advani in some ways, Joshi was quite like Atal Bihari Vajpayee in his behaviour in public. Like Gujarat's powerful Congressman Ahmed Patel (Sonia Gandhi's political secretary), Joshi loves to remain low-profile.

Like Patel, he is the guy who would not give sound bytes to television reporters nor would he rush to the print media. Like a majority of RSS pracharaks, Sanjaybhai is unmarried.

When the RSS sent him to Gujarat to handle the BJP's affairs in the state he was an unknown entity.

Much before the power shifted to the BJP in 1995, Shankersinh Vaghela had been upset with the dominance of the Patels in the party.

Sanjay Joshi, with his sober nature and friendly attitude, motivated cadre and district leaders. His managerial expertise to run the party was comparable to Modi then. He became very popular amongst local leaders and cadres.

For years he worked till midnight in the BJP office in Khanpur in Ahmedabad.

Modi had big ambitions right from the start 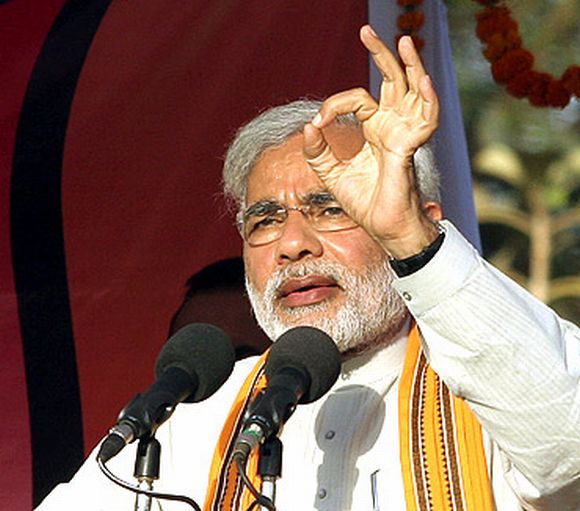 On a number of occasions Sanjay Joshi slept in the corner of the party office on a small charpai. He hardly needed any material comforts while consolidating the BJP in Gujarat.

Being an engineer, if there was a power failure at night, Joshi would himself repair the fuse. He has been wearing kurta-pyjamas and slippers, always.

In those days he never ironed his clothes. In spite of his well-established status and usefulness for the upcoming party, Joshi would speak to even an unknown party worker with respect. He was so humble in his behaviour that BJP cadres would open up to him easily.

Modi, in contrast, even in the early years of his career, loved air-conditioned cars, decent accommodation while traveling, stylish watches and many pairs of chappals and shoes. He wore simple, but elegant clothes.

Joshi was altruistic, uncompromising, on the party's ideals and could behave equal to ordinary party workers.

Right from their early days, Modi nurtured big ambitions of playing a larger role nationally, of 'capturing New Delhi' so to speak. In stark contrast, Joshi was low-profile, more interested in growing the party at the grassroots and strengthening the Sangh Parivar.

From 1994 onwards, Narendra Modi and Sanjay Joshi had emerged starkly different in their approach to issues and attitudes towards workers. In spite of the impressive presence of the young and dynamic Modi, workers thronged to Joshi as well.

If Modi was one of the BJP's strategists Joshi was the hard worker who fixed the nuts and bolts of the organisation to make it fit for elections.

After Keshubhai Patel became the BJP's first chief minister in 1995, Modi was replaced by Joshi. The ageing Patel found Joshi more reliable and felt more comfortable in his company.

Patel discovered that Joshi provided only political advice and never interfered in the administration, while Modi had an opinion on administrative matters and influenced it, many times. 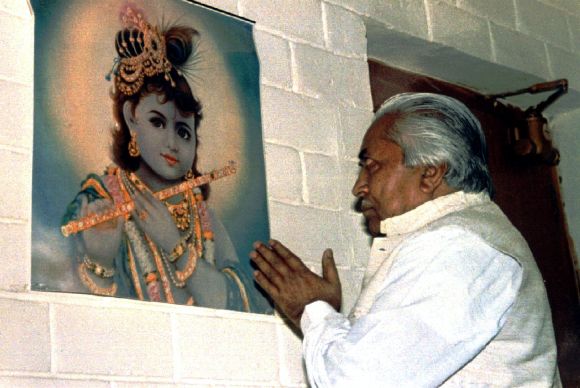 In 1995, a day after Keshubhai Patel became chief minister, Joshi was seen in the queue outside Patel's office. He would not go out of turn to meet his leader.

Modi's physical presence oozes with power and his political importance, while Joshi would do everything to hide what power he wielded by his soft behaviour.

From 1994 onwards Joshi traveled all over Gujarat in a non-air conditioned Tata Sumo vehicle. The BJP workers knew that Sanjaybhai was the easiest guest to please.

After he had an ego tussle with Keshubhai Patel, Modi was shifted to New Delhi and made general secretary in charge of the party orgnisation in 1998.

Modi kept monitoring Joshi while in exile in New Delhi. He knew Joshi was close to senior Cabinet ministers in New Delhi and had a kind of clique with the Brahmin lobby within the BJP.

Joshi was turning out to be the most dependable face of the growing BJP organisation in Gujarat. Modi's remote control never worked.

To be fair to Modi, Joshi was not as simple and straight-forward as his appearance made him to be; he was a man given to Machiavellian manipulations.

Eventually, with the kind help of Arun Jaitley and the cajoling of Atal Bihari Vajpayee, Modi staged an unprecedented political coup in 2001 to become chief minister.

Keshubhai Patel has never forgiven Modi for it. 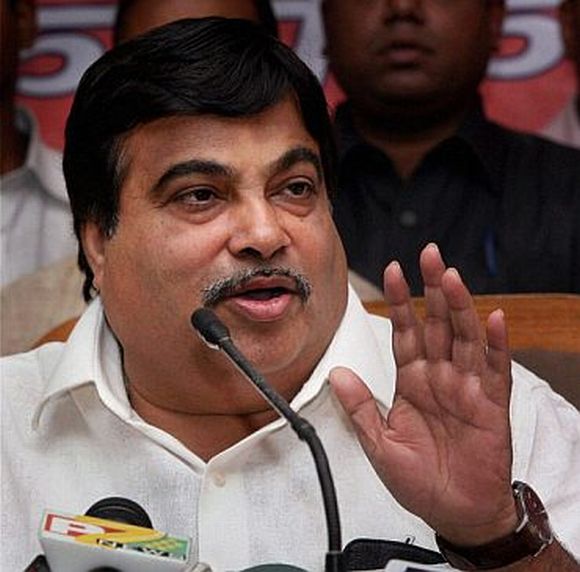 Sanjay Joshi had to not just retreat after Modi became chief minister, but also leave Gujarat. He left Gujarat grudgingly where he had nurtured his party so successfully.

Modi's growth was unrestricted. He started, quite easily, pushing all his adversaries and competitors onto the margins. Modi stunted Haren Pandya's political career and nullified Sanjay Joshi's soft power in Gujarat.

It was bad luck for Joshi that his friend and party colleague Pandya was murdered in 2003.

Joshi himself got the shock of his life, in 2005, when a sex CD allegedly involving him was leaked to the media.

After cooling his heels for five years, BJP President Nitin Gadkari, in a desperate bid to strengthen his weakening position, brought back Joshi into the party leadership and sent him to Uttar Pradesh.

He didn't do enough homework and imposed Joshi on the party. Modi is the last man to suffer such humiliation. He took Gadkari head on. He stopped taking his calls. He never allowed Gadkari any say in the Gujarat outfit.

The gulf between Gadkari and Modi was so deep that even senior BJP leader Arun Jaitley could not bridge the distance.

At one point of time, seeing Modi's clear win over Gadkari, some partymen, including former Gujarat minister of state for home Amit Shah, tried to explain to Joshi that he should not work against Modi.

Joshi succumbed to the circumstances and allegedly gave it in writing that Modi was not involved in creating or leaking the sex CD.

Joshi took a view that his own pain should be ignored if the party was strengthened by his truce with Modi. In spite of his peace gesture, the bitterness and distrust between him and Modi only increased.

Modi never forgave Joshi for teaming up with Pandya. He will never take lightly Gadkari's attempt to team up with Joshi.