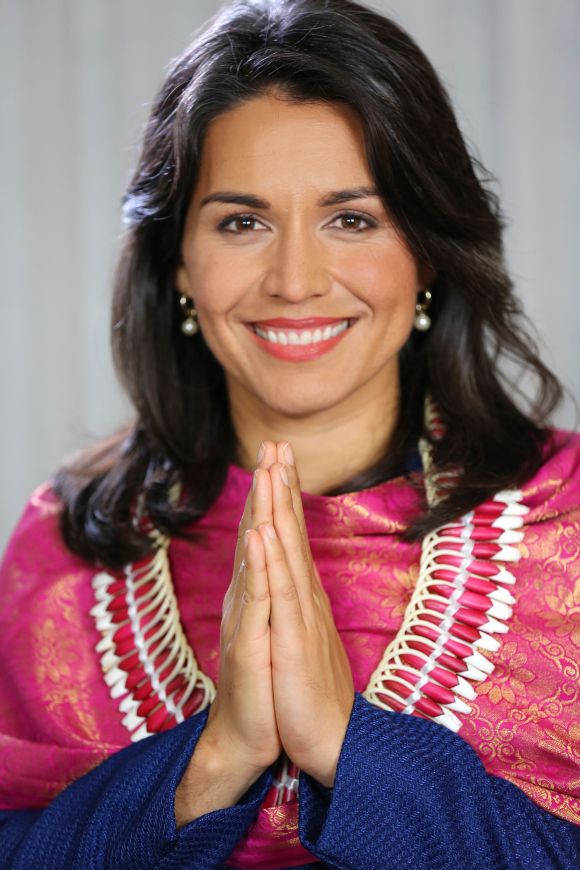 Tulsi Gabbard, 31, who was burying her opponent and well on her way to winning Hawaii's 2nd Congressional District on the Democratic ticket and creating history by  becoming the first Hindu American in the United States Congress, took a couple of minutes out from watching the election results to give a shout out to President Barack Obama on his convincing re-election.

She said, "I very much look forward to working closely with him to improve our economy, get our troops out of Afghanistan as quickly and safely as possible, and work for the well-being of all of our people."

Gabbard added, "To move our country forward, we need to be less concerned about partisan politics and more concerned about actually serving the interests of the American people. I'm thankful and honoured to have been elected to Congress by the people of Hawaii and anxious to get to work."

On becoming the first practicing Hindu to be elected to the US Congress, Gabbard said, "Hawaii is known as the aloha state. Aloha means heartfelt respect and love for others, regardless of their race or religion. I grew up with a great appreciation for the cultural melting pot that we have here in Hawaii."

"Although there are not very many Hindus in Hawaii, I never felt discriminated against. I never really gave it a second thought growing up that any other reality existed, or that it was not the same everywhere," she said, and added, "My experiences in the Middle East, in Eastern Europe, and across the country, showed me firsthand this is not the case."

'Hope to play role in increasing people's respect, love for one another' 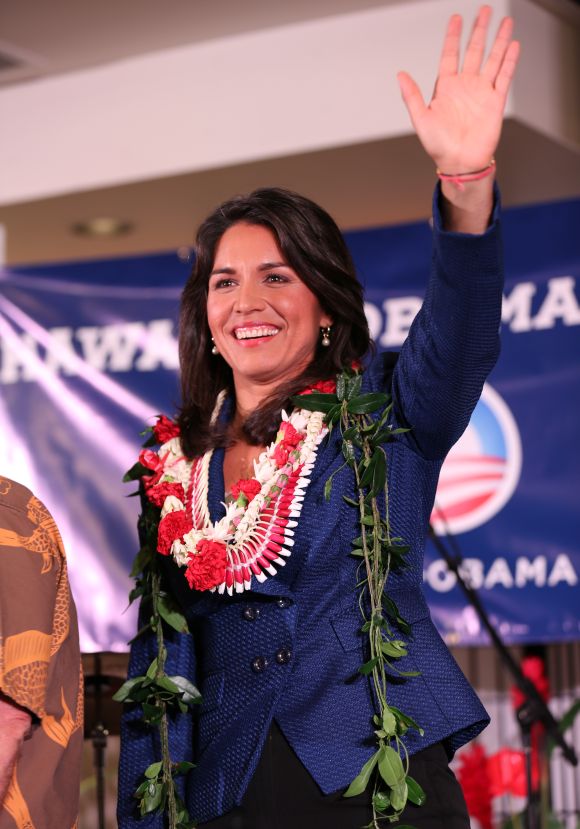 Gabbard said, "On my last trip to the mainland, I met a man who told me that his teenage daughter felt embarrassed about her faith, but after meeting me, she's no longer feeling that way. He was so happy that my being elected to Congress would give hope to hundreds and thousands of young Hindus in America, that they can be open about their faith, and even run for office, without fear of being discriminated against or attacked because of their religion. As a congressional representative, I hope to be able to play some small role in increasing people's respect, understanding, and love for one another despite our differences."

Gabbard also received the support of President Obama in her race for Congress. "The President also grew up in Hawaii, and shares that aloha spirit that makes Hawaii so special," she said

She stated that her main motivation to run for Congress is her desire to be a servant-leader. "I learned from an early age that true happiness comes from being of service to others and not just living for yourself. As a teen I began to experience what it meant to find true happiness by working toward a higher purpose. I started helping my dad with his environmental work, and I co-founded the Healthy Hawaii Coalition, teaching children about caring for the environment and maintaining a healthy diet and lifestyle. The more I engaged in activities that weren't just for myself, the happier I became, and the more I wanted to do," she said.

"I felt that I needed to have more influence on society and policies, so in 2002 I ran for the Hawaii State Legislature. This desire to serve is also what motivated me to enlist in the Hawaii Army National Guard, to put aside my easy re-election to the state legislature to join my fellow guardsmen who had been called to the war in Iraq, to serve as a legislative aide with Senator Daniel Akaka in the US Senate, and to serve on the Honolulu City Council. This spirit of servant leadership is what I hope to bring to Congress," she said.

Gabbard's election also makes her one of the first female combat veterans to serve in the Congress. As a member of the Hawaii National Guard, Gabbard served two tours of duty in the Middle East. She was awarded the Meritorious Service Medal for her service and currently serves as a Captain.

Gabbard was the youngest person elected in Hawaii history, when in 2002 at the age of 21 she won a Hawaii State House seat.  Two years later, she gave up her position in the Legislature to voluntarily join her fellow soldiers being deployed to a war zone in Iraq.  Between her two deployments to the Middle East, Gabbard served as an aide to Senator Akaka.  In 2010 she was elected to the Honolulu City Council where she chaired the Safety, Economic Development, and Government Affairs Committee.

Earlier last month, Gabbard, fresh from her rock star status at the Democratic National Convention in Charlotte, North Carolina, visited Washington, DC to meet with party leaders and Democratic National Committee officials, who were gung ho about this rising star. And, during that visit too, she was accorded a reception by the Indian American community, who also organised a fund-raiser on her behalf. 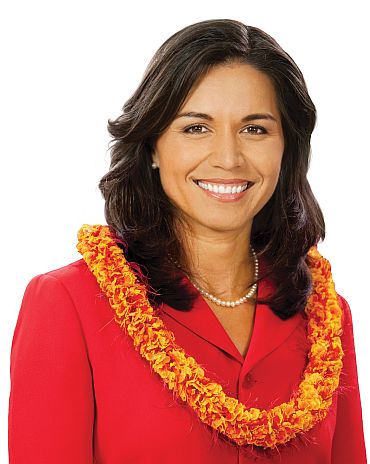 In August, Gabbard defeated her main opponent, former Honolulu mayor Mufi Hanneman, in the Democratic primary by 55.1 to 34.3 percent in a come-from-behind victory, which put her in the driving seat to win the general election in the predominantly Democratic district.

In an exclusive and wide-ranging interview with rediff.com last month, Gabbard discussed her embrace by the Indian American community, her Hindu faith, her progressive take on issues like abortion and same-sex marriage despite coming from an extremely conservative family background, and the priorities on her agenda once she is ensconced on Capitol Hill.

She also pledged that she would work assiduously to promote US-India relations and push for India's bid for a permanent seat in the UN Security Council while also fighting to protect the rights on the minority Hindu Pandit community in Jammu and Kashmir and the human rights violations against the Hindu minority in Pakistan.

On the legislative front, Gabbard said a priority would be to push for an increase of H-1B visas so that more Indian professionals can come over to the United States and be catalytic in this country's growth and global competitiveness.

"Namaste and aloha from Hawaii to all my friends in the Hindu American and Indian American community. I want to thank you all for your kind support throughout my campaign," Gabbard said.

"This is an exciting day for all of us and I look forward to working closely with you in the months and years to come and to being a strong voice in Congress for the improvement of US-India relations, and domestic issues of concern to you as Hindu and Indian Americans."

"The people of Hawai'i have shown tonight in my victory that we indeed are a people of aloha, and I'm looking forward to your visiting our beautiful and wonderful state where you and your culture and religion will be respected,"

"My door will always remain open to you. Thank you again for your support and encouragement," she said after her win.