Meet the most powerful women in the world 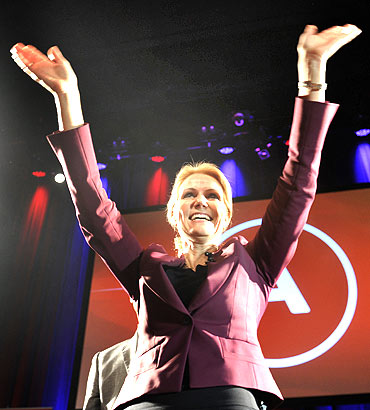 She is the latest young and vibrant leader to take over the reins of her nation.

Helle Thorning-Schmidt, leader of the left-centre party Danish Social Democrats, is expected to become the first woman prime minister of Denmark in October. She won a wafer-thin majority over her left-right rivals in the recently held elections.

Thorning-Schmidt, 44, has earlier served as a member of the European Parliament for five years.

But the road to the PM's post has been riddled with controversies for her. She has faced accusations of being a weak leader who is too fond of designer garments. She and her husband have also been investigated for tax fraud.

Thorning-Schmidt joins the list of the world's most powerful women politicians. Let's take a look at some other women who continue to make waves in world politics. Yingluck Shinawatra became Thailand's first woman prime minister after she led her party to a landslide victory in the general election.

Shinawatra is a successful businesswoman who had earlier shied away from playing an active role in politics in spite of being the sister of Thailand's controversial former prime minister Thaksin Shinawatra.

She was named as the prime ministerial candidate barely two months before the elections, but still her party Pheu Thai managed to secure a parliamentary majority.

Critics have claimed that Shinawatra is merely a proxy for her powerful brother, who is currently in exile. But she has dismissed these charges and vowed to initiate 'reconciliatory' steps to appease the rebels in this politically volatile country. 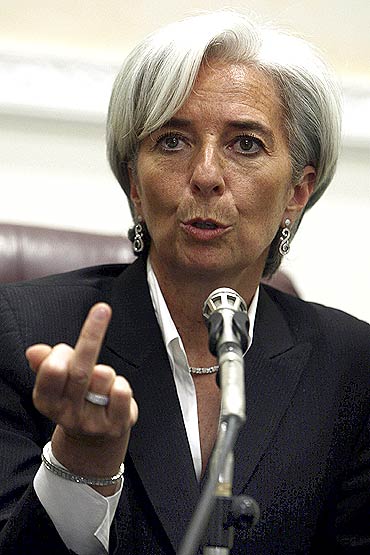 On July 5, Christine Lagarde became the first woman chief of the International Monetary Fund after her predecessor Dominique Strauss-Kahn was forced to step down in the wake of rape allegations against him.

Lagarde had been serving as the finance minister of France when she announced her bid for the IMF top post.

Incidentally, she was the first woman to hold the finance portfolio of a G8 country.

Lagarde has earlier managed the portfolios of trade and agriculture. Her handling of France's economy during the worst phase of recession was hailed by many.

Lagarde is a former labour lawyer who once headed a reputed international law firm in Chicago. 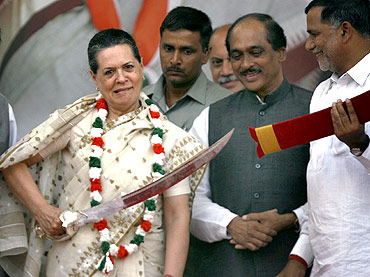 From being the publicity-shy wife of late prime minister Rajiv Gandhi to becoming the most powerful person in a country of over one billion people, Sonia Gandhi has come a long way.

She regularly finds a mention among the most powerful politicians in the world, and with good reason.

Officially, Gandhi doesn't hold any position of authority in the government. But the government of Prime Minister Manmohan Singh doesn't take a single decision without her blessings.

Every flagship initiative of the government -- from the Right to Food bill to the Women's Reservation Bill -- bears Gandhi's personal stamp.  Though she rarely makes any political statements in public, the Congress president holds the key (and the remote control) to the world's largest democracy. 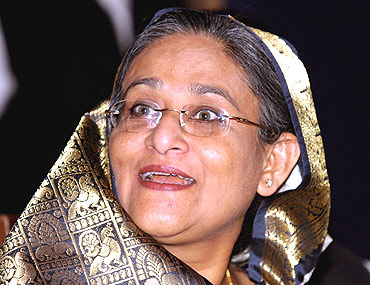 As the ruler of one of Asia's most impoverished and politically unstable nations, Sheikh Hasina has an unenviable job on hand. A violent opposition, shocking levels of corruption in the administration and endless natural calamities add to the woes of the Bangladesh president.

After serving as the premier between 1996 and 2001, her party had suffered a humiliating defeat. Sheikh Hasina was charged with a slew of accusations including murder, extortion and corruption.

Since becoming the prime minister of Bangladesh for the second time in 2008 after much tribulation, Hasina has taken the issues plaguing her nation head on. She has vowed to combat the abysmal levels of unemployment and corruption and has worked actively to improve relations with neighbouring nations. 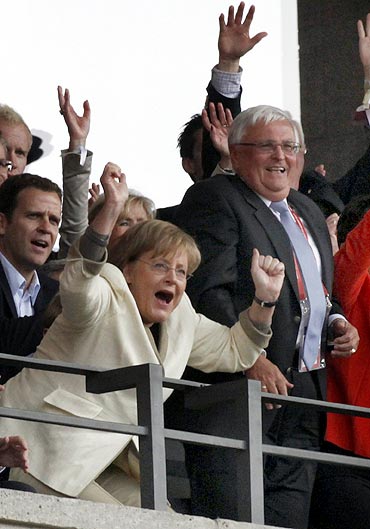 The no-nonsense politician has been the most powerful woman in Europe for years. Chancellor of Germany Angela Merkel has not only been voted the Most Powerful Woman in the world for four successive years (2006-2009) by Forbes, she has also served as the president of the European Council and the formidable G8.

The 'Iron Frau' has ruled Germany for over six years and managed to hold her own against the world's most powerful leaders.

The United States administration recognised Merkel's contribution to maintaining the fragile equations in world politics by honouring her with the Presidential Medal of Freedom. The Indian government conferred the Jawaharlal Nehru Award for International understanding to Merkel in May 2011.

Hillary Clinton, US secretary of state 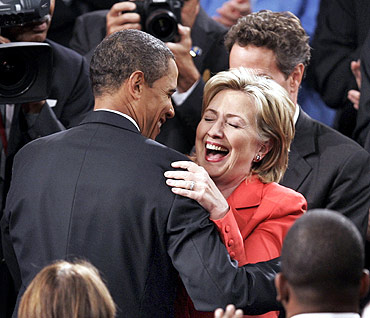 She missed out on the presidency of the United States after being beaten to the post by the charismatic Barack Obama. But Hillary Clinton readily accepted the second most powerful position in the US administration: Secretary of State.

Clinton has lived up admirably to her challenging role; she has repaired ties with many nations estranged during the disastrous tenure of George W Bush.

She has also exhibited a tougher side; Clinton was the only woman in the control room at White House that monitored the operation that killed Osama bin Laden in Abbottabad, Pakistan.

Once best known as the betrayed wife of her philandering husband, former US President Bill Clinton, Clinton is today considered the most formidable woman politician in the world. 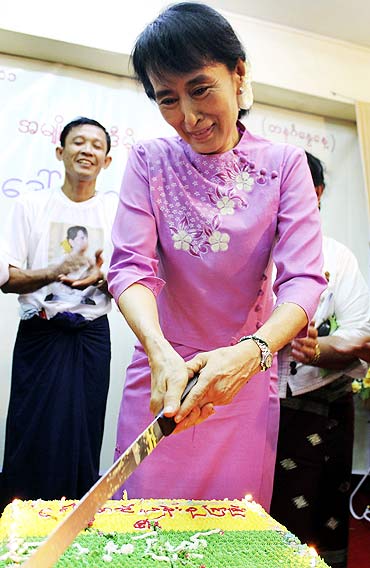 On November 13 last year, Aung San Suu Kyi was released from house arrest by the pro-junta government of Myanmar for the first time in eight years.

Suu Kyi, an icon for pro-democracy and human rights activism, had spent 15 of the last 20 years of her life under various forms of imprisonment for speaking up against the ruthless regime of the junta.

The Myanmar government released Suu Kyi as part of its 'pro-democracy' measures, but her supporters fear that she might be arrested again soon.

Since her release, the ailing leader has maintained a low profile, while her party National League for Democracy continues its fight against the despotic government. 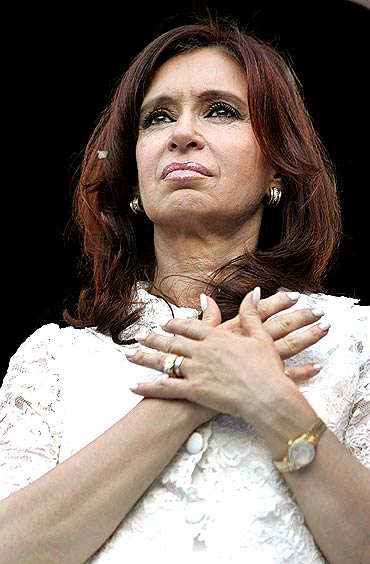 Argentina's president Cristina Fernandez de Kirchner is South America's answer to India's Sonia Gandhi and America's Hillary Clinton. She owes her political credentials to her husband, Nestor Kirchner, who had ruled the country before her.

Fernandez's four-year rule has attracted an equal number of detractors and supporters. She will face her litmus test in October this year -- when Argentina goes to polls -- without her beloved husband by her side. Kirchner died in October last year after suffering a heart attack.

While her counterparts in India and United States prefer to stick to an elegant but simple dressing style, Sanchez is notorious for her penchant for the latest fashion. She is never seen in public without high heels and make-up and reportedly never repeats the same outfit twice. 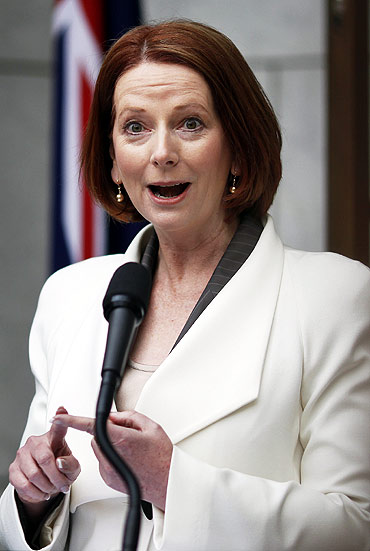 A lawyer by profession, Gillard started dabbling in politics while studying at the University of Adelaide. She had been in charge of the ministries of immigration and health before she made a bid for the post of the PM.

Gillard is a veteran parliamentarian who is known for her debating skills. She has declared that education and health sectors will remain her main focus during her tenure.