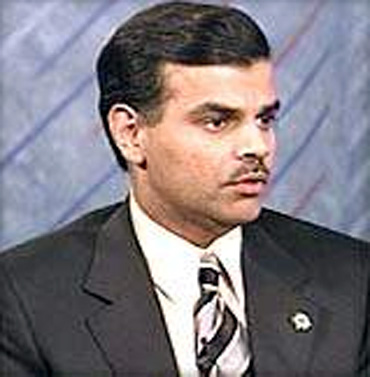 'Mansoor Ijaz is a smooth operator. I am not surprised he fooled us or anybody, former R&AW chief A S Dulat tells Sheela Bhatt.

Mansoor Ijaz, the American businessman of Pakistani origin, who leaked the so-called memo that sought American help to counter the threat of a coup by the Pakistan military, was due to arrive in Pakistan on Monday, January 16.

He was to testify before a judicial commission in Pakistan investigating the 'Memogate' scandal, but did not show up, dashing a lot of anticipation within the country about the issue that has increased tensions between the civilian government and the army.

Ijaz has alleged that the memo was dictated to him by then Pakistan ambassador to America Husain Haqqani at President Asif Ali Zardari's behest, seeking American help to avert a possible coup after the United States military raid which led to Osama bin Laden's death in Abottabad, Pakistan, last May.

The Memogate scandal, as Ijaz's revelations have come to be known, has rocked the Pakistan government. If the allegations are proved, then President Zardari and Haqqani could face charges of treason.

Ijaz is an American national, but lives outside America, mostly in Morocco.

Incidentally, Mansoor Ijaz also has an Indian connection. In 2000-2001, he had taken the Vajpayee government for a ride that with his kind of contacts in Islamabad and Washington, DC, he could help India solve the Kashmir issue.

What happened when Ijaz came to New Delhi and visited Srinagar is a story the Indian government would rather forget.

When he came to New Delhi, A S Dulat, former chief of the Research and Analysis Wing, India's external intelligence agency, was an advisor on Kashmir to then prime minister Atal Bihari Vajpayee. Brajesh Mishra was the national security adviser and principal secretary to Vajpayee. Dulat and Mishra worked on Vajpayee's Kashmir policy.

In an exclusive interview to Rediff.com's Sheela Bhatt, Dulat analyses the Memogate controversy, questions Ijaz's capacity and recounts his bragging about solving the Kashmir issue.

How do you look at Memogate? What is your reading of the entire episode?

It has shaken up the civil-military relationship (in Pakistan), and the whole story is not out yet, it is just beginning to unravel. Whether the story comes to a halt here, or it goes on and on...

To quote Mansoor Ijaz himself, he said there is something darker and deeper in this. If we go by that then this story is not yet over. There may be more parts to it. But obviously the main target of Memogate was Husain Haqqani and now Haqqani has been removed.

Inevitably, I think this will take a greater toll and my own feeling is that it will hit President Zardari.

Zardari has succeeded in sending Sherry Rehman as ambassador to America and Sherry is, I think, as much a liberal as Haqqani was.

In Pakistan, to survive in any case, you have to have a relationship with the military. Haqqani has written a book and been very critical about not only terrorism but radicalism, the Pakistani military and the ISI. It's all on record.

The military was never very happy with Haqqani. Sherry is a liberal democrat.

The genesis of Memogate, they say goes back to May. It started with Osama bin Laden's death. After the bin Laden event the Pakistan military, for quite a while, was on the defensive.

It has never been so defensive as it had to be after the Osama bin Laden raid. Because the people said either the military was involved or they were incompetent, they didn't know what was happening.

So either way there was criticism and for the first time in the history of Pakistan, the generals were hauled up and called to the national assembly (Pakistan's parliament) and the director general of the ISI had to give a long explanation.

So obviously that has not gone down well with the military. Now it seems that the military is getting its own back. So they are looking much more confident.

'I think Haqqani is speaking the truth more than Ijaz ' 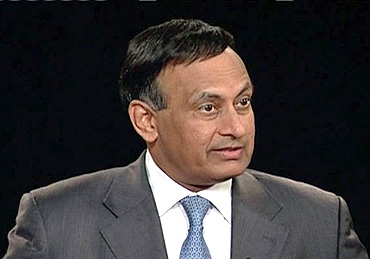 Image: Husain Haqqani, former Pakistan ambassador to the US, was replaced by Sherry Rehman after the Memogate scandal

How many times did Mansoor Ijaz came to India?

I don't know. But he was around here in 2000-2001. Maybe he came twice. If you remember, before that Farooq Kathwari (the chairman of a well-known furniture company in the US) used to come. He followed, in a sense, in Kathwari's footsteps.

When Kathwari stopped coming, we heard of Mansoor Ijaz. He used to talk about big names, I think he even said that he had a line to Clinton....

Yes, Bill Clinton. The idea he was selling was that if you want things (to solve the Kashmir issue) and if the Americans are on board I can also get Pakistan on board.

The question that people are asking is: Who is he working for?

My guess is he may have been working for many agencies. But he was certainly working for the ISI. There is no doubt about it.

In an interview he talks about the ISI being out of control. He says that is what prompted both that memo and also what he wrote recently for The Financial Times.

If that is so, then, why did he spend four hours in some hotel in London with the DG of ISI?

If the ISI is out of control, then what is he doing with the DG, ISI? Why is he hobnobbing with the ISI?

So obviously you know whatever other agency he works for, he's definitely got a good link with the ISI. That is Mansoor Ijaz.

Isn't it true that you were a part of the team who invited him to India to be an interlocutor in Kashmir?

No, no, no, that is absolutely wrong. As I said I've never seen him, I've never met him and I was not part of any team.

'In Pakistan everything is a mystery' 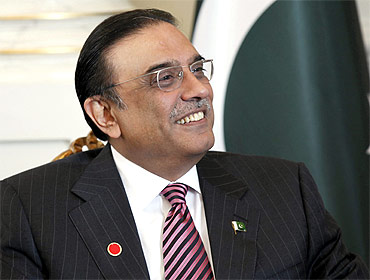 Don't you think in a way he fooled or misled India?

You know these operators. I don't want to use intelligence jargon and say he was a double agent or a double-double agent, but as I said, he's a smooth operator. So I'm not surprised he fooled us or anybody.

When I think of this whole Memogate thing, it is quite possible that at that point of time, whenever this memo was sent, he was possibly suggesting to the civilian government in Pakistan that you could have a coup in Pakistan and therefore we need to warn the Americans.

And today he may be telling the ISI that 'Look your civilian government is getting out of your control so you better control it.'

So it's possible that even in Pakistan he's playing it both ways.

At whose behest did he trap Haqqani into dictating the memo?

I think on his own initiative. It is not the question of who wanted to trap Haqqani.

Haqqani was possibly on the ISI or the Pakistan military radar for a long time. They were not very happy with him.

And you know that with regard to American financial aid also, there was an issue as to why the military was left out.

Considering that this memo was given to Admiral Mike Mullen, I don't think the Pakistani military had been very happy with Mullen's outburst before he left office.

All this has contributed to the event. If the American chairman of the joint chiefs of staff has been so critical of the Pakistani military, then what is their ambassador doing in Washington?

That means Ijaz is most likely helping the Pakistan army by exposing Haqqani? Correct?

Absolutely. That's why I'm saying that although he claims that the ISI was out of control and that the ISI was getting too big for its boots. Actually he was hobnobbing with the ISI. So he was playing....

That's why I'm saying that in Pakistan everything is a mystery.

Ijaz is an American citizen. Why is he out to harm American interests in Pakistan?

Have you noticed for so long he has not been in Washington? He has been more in London and elsewhere in Europe. And if you ask me, on the face of it, I think Haqqani is speaking the truth more than Mansoor Ijaz is. Definitely.

Whatever, the inside story -- Haqqani is more trustworthy.

Please read Part 2 of the A S Dulat interview, which is making waves in Pakistan:
'The Pakistan army would be quite happy with Imran Khan'