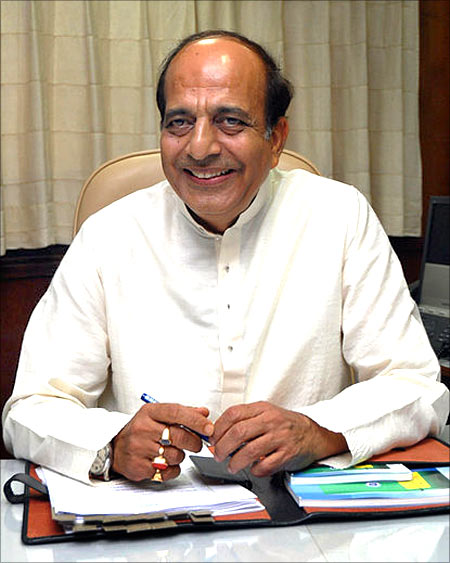 On a day of dramatic developments, The Trinamool Congress on Wednesday night sought the removal of its senior-most nominee in the Union Cabinet, Railway Minister Dinesh Trivedi, hours after he proposed a hike in railway passenger fares, plunging the United Progessive Alliance government in an unusual political crisis.

Angered by Trivedi's proposal contained in the Railway Budget which he presented to Parliament earlier in the day, mercurial TMC boss and West Bengal Chief Minister Mamata Banerjee wrote to Prime Minister Manmohan Singh late in the night seeking removal of Trivedi and his replacement by Mukul Roy, currently minister of state for Shipping who had earlier served in the railway ministry. 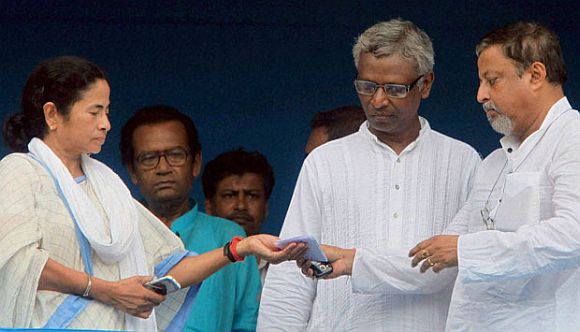 "Yes, I have written to the prime minister seeking his replacement with Mukul Roy, another union minister," Banerjee told PTI.

In fact, Mukul Roy would be replying to the railway budgetary demands for grants before this month-end, highly placed TMC sources said.

Mamata's decision created an unprecedented situation in the country's parliamentary history when a minister is sought to be removed even before the budget presented by him has been discussed in Parliament. In addition, it puts Singh in a piquant situation, which is also unprecedented.

The government was thus faced with a war within which could have serious consequences on its stability.

Should Singh not follow Mamata's dictat, TMC, which is the second largest constituent with 19 MPs in Lok Sabha, may very likely pull out of the government which will increase its dependence on outside supporters like Samajwadi Party and BSP.

Mamata's brinkmanship also presents the prime minister with another acute embarrassment since he had praised Trivedi's budget earlier as "forward-looking".

There are deep concerns within the UPA about Mamata's behaviour which comes two days before the General Budget is to be presented by Finance Minister Pranab Mukherjee on Friday.

It is very likely that she may find fault with some of the proposals in the General Budget and create further trouble for the government. 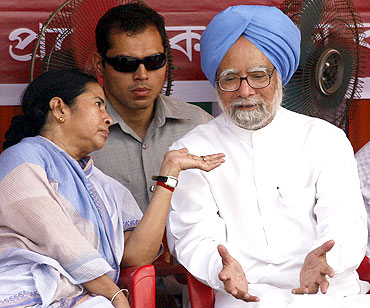 Reacting to Trinamool Congress chief Mamata Banerjee's seeking the dismissal of Railway Minister Dinesh Trivedi, Congress said "it is an internal matter" of its ally and the prime minister will take "appropriate action" on the matter.

"It's an internal matter of that party (Trinamool Congress). The prime minister will take appropriate action," said Congress spokesperson Rashid Alvi when asked to comment on Banerjee's writing a letter to Prime Minister Manmohan Singh wanting him to sack Trivedi.

The suave, US-educated Trivedi, 61, found himself in a piquant situation immediately after he presented his maiden railway budget in which he proposed an across-the-board hike in passenger fares to mop up an additional Rs 4,000 crore for spending on railway safety.