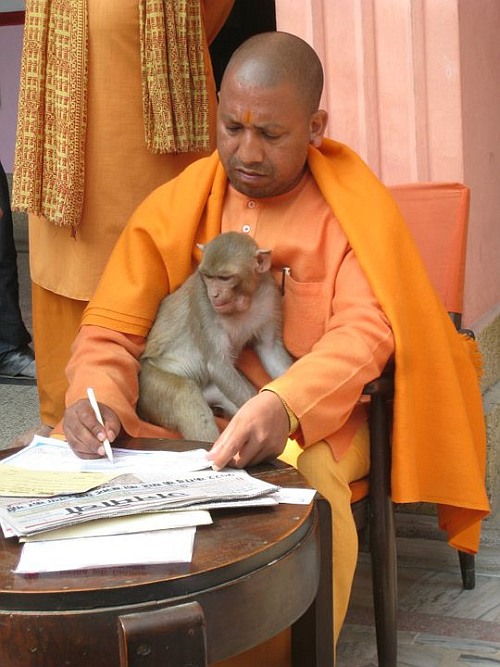 From 8 am to 10 am each morning, Yogi Adityanath, high priest of the Gorakhnath mandir and Gorakhpur's Member of Parliament from the Bharatiya Janata Party since 1998, tends to his constituency from a low desk in a spacious room in the administrative block of the temple's sprawling lands.

Assisting him is a team of scribes, seated cross-legged on the ground before a set of ancient Devnagari-script typewriters, balanced on bricks wrapped in old newspaper. Petitioners pass through a security check, leave their shoes at the gate, and approach the priest with folded hands and bowed heads.

Adityanath -- short, stocky, and clad in saffron robes, thick transparent plastic earrings, and vermillion socks -- listens with the fragile patience of a self-consciously busy man. "Write an application," he occasionally declares. The clerks nod dutifully and slide another sheet of paper into the typewriter.

Recent reports describe Adityanath - a Hindutva hardliner, and prime accused in Gorakhpur's 2007 communal riots -- as a key coordinator of the BJP's election strategy for Uttar Pradesh, the state with the most Lok Sabha seats. He first won the Gorakhpur seat when 26-years-old; now 42, he has fashioned himself as the BJP's most recognised face in east Uttar Pradesh. 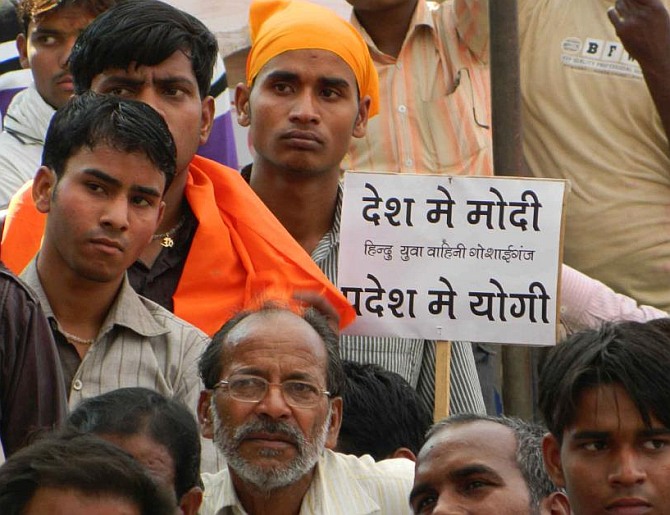 The BJP has spoken of a wave in favour of their prime ministerial candidate, Narendra Modi, but Lokniti-CSDS post-election surveys over the past 15 years establish that a quarter to a third of the electorate vote on the individual qualities of a candidate rather than the party she represents, suggesting many seats could turn into head-to-head contests between candidates with specific local histories, rather than the competing narratives of Modi and Rahul Gandhi.

In 1999, Yogi Adityanath won Gorakhpur by the slimmest of margins -- 7,339 votes; 10 years later in 2009, he romped home with a winning margin of 2,20,000 votes. This year, locals are speculating on the winning margin, rather than the possibility of his victory, despite no particular signs of progress in this constituency.

Gorakhpur appears a melancholic border town on the Uttar Pradesh-Nepal border, yet to overcome the loss of its fertiliser factory, shuttered in 1990, its sugar mills that collapsed over the next decade, and its children -- claimed by the hundreds every year by Japanese encephalitis. Male and female workforce participation is amongst the lowest in the country and a little more than 70 per cent of households still do not have an indoor toilet.

Over 15 years, Adityanath, an upper caste Kshatriya, has sunk deep roots in Gorakhpur. His clerks resolve squabbles in city neighbourhoods; his foot soldiers from the Hindu Yuva Vahini engineer riots in the countryside. His inflammatory anti-Muslim rhetoric has polarised eastern Uttar Pradesh, while his position as the mahant of the Gorakhnath temple lends his pronouncements an air of mystical profundity. 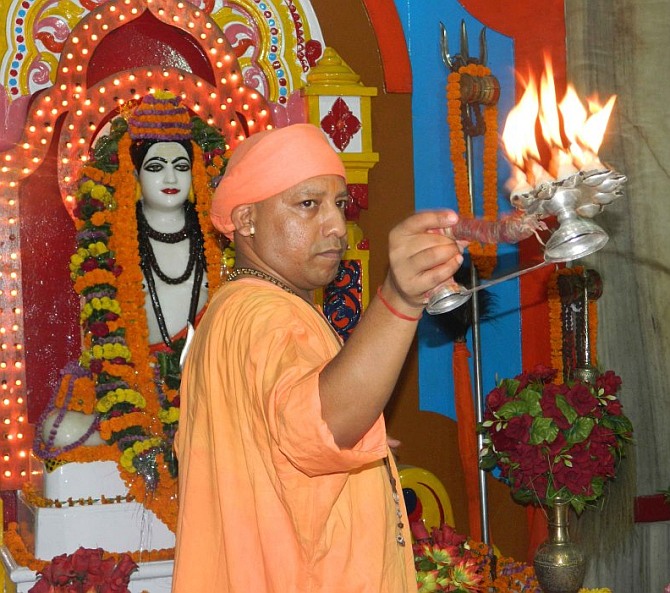 This election season, the BJP has publicly focused on the need for good governance and development and steered clear of overt communal and regional propaganda but on the ground, Modi is banking on regional satraps like Adityanath to bring in the votes at all costs.

"We solve problems," said Dwarika Tiwari, Adityanath's head clerk, gesturing to his typewriter, his telephone, and a stack of tattered notebooks filled with telephone numbers gathered over decades, "We write to the appropriate authorities, we telephone the superintendent of police, we inform the district magistrate and tell him to investigate."

Jung Bahadur, a retired infantryman, has come on behalf of his grandson, "Rajbir, my grandson ran away with a dhobi caste girl. Her parents say she was kidnapped. He is in police detention." Chandra Prakash Gupta, dismissed from a private distillery eight years ago, has been coming ever since in search of a job. Suresh Sharma, a Gorakhpur resident now employed as an accountant in Chennai, has dropped by to have his photograph taken with the yogi, "I go to the BJP office in Chennai; it is good to have a photo to show them."

No problem is too small for Adityanath's attention, no trouble too trifling. "We'll do whatever is needed," Tiwari said, as he churned out the latest application on official MP letterheads, "This? This one is for someone who urgently needs a train reservation using the MP quota." 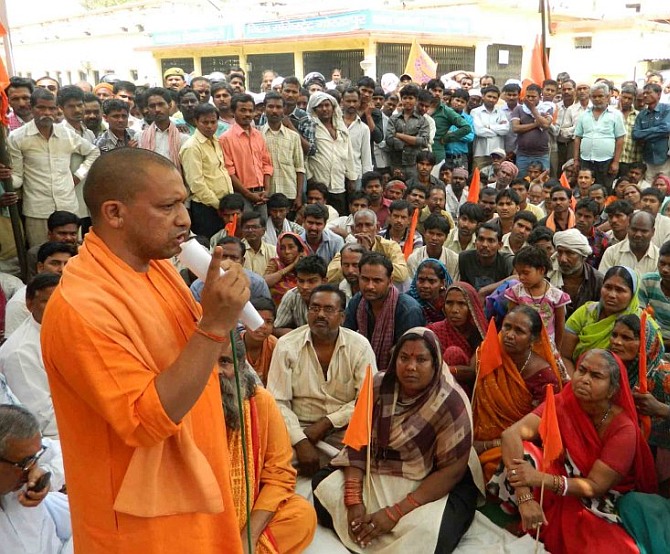 An MP is expected to legislate, hold the executive to account and represent the interests of her constituency in Parliament. Adityanath, for his part, has sponsored five Bills -- there was one in 2009, asking the Centre to pass a national law banning cow slaughter, another to change the country's name from "India that is Bharat" to "Bharat that is Hindustan", and a third banning forced religious conversions. He has also called on the Allahabad High Court to set up a bench in Gorakhpur, and for a uniform civil code.

Yet, in their constituencies back home, MPs aren't judged by House attendance, questions asked, or participation in debates, but on their ability to leverage the state on behalf of their constituents.

Most MPs have neither the funds nor staff to implement big-ticket projects that could ensure re-election.

For example, a representative can spend Rs 5 crore per year on her constituency under the MP Local Area Development Scheme, which works out to a total of Rs 400 crore a year for Uttar Pradesh's 80 Lok Sabha members; a minuscule sum compared with the state government's budgeted expenditure of Rs 221,201 crore for this year. This is where Adityanath's morning meetings prove crucial.

"Voters perceive the role of MPs as that of a problem solver," said Chakshu Roy of PRS Legislative Research, explaining MPs are often voted for doing everything apart from their constitutionally mandated jobs, "Voter expectations, therefore, align the incentive structure for MPs to address constituency concerns at the cost of their legislative responsibilities." 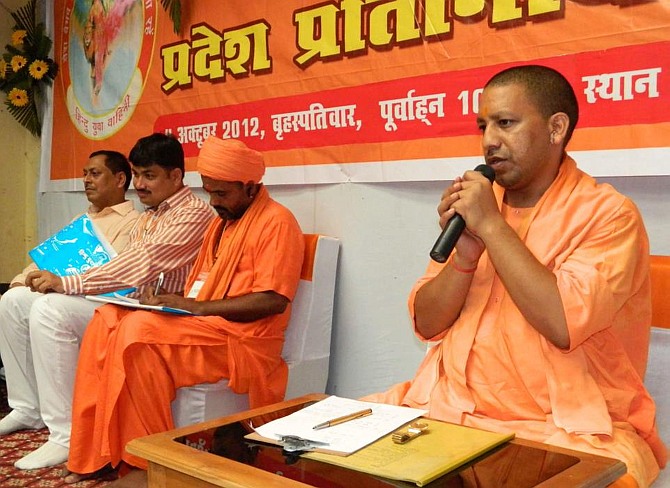 Further, before selling their message to their electorates, prospective MPs must first convince their own parties of their candidature -- this makes the creation of a committed base and local politics even more critical. Rajnath Singh could replace BJP stalwart Lalji Tandon in Lucknow, but no one is likely to replace Adityanath in Gorakhpur.

"The public is deeply attached to my name, to my thought process, to me," said Adityanath in an interview soon after his durbar, "The public wants their elected representative to be in touch with them." Through his daily hearings, he said, "I have a constant conversation with the public about their personal problems, problems with the administration, problems with a powerful oppressive person. That is why they vote for me."

Yet, any other candidate could arguably set up an equally efficient grievances cell. Adityanath's biggest asset, his critics said, is an amorphous vigilante army of youth organised as the Hindu Yuva Vahini and tasked with protecting the Hindu faith.

In 1999, Yogi Adityanath made front-page news as an MP. "BJP out to protect trigger-happy MP" ran the second lead on the March 6 Lucknow edition of The Times of India, detailing an extraordinary story that began as a minor dispute over the fate of a peepul tree in a Muslim graveyard in a faraway village, acquired increasingly communal overtones, and ended with Adityanath desecrating the graveyard and his supporters fatally shooting a 26-year-old policeman in the face.

"A pattern emerged," said Manoj Singh, a senior journalist in Gorakhpur, "Yogiji or his supporters would interfere in a village-level fight between two communities and turn it into a big case of Hinduism under threat." 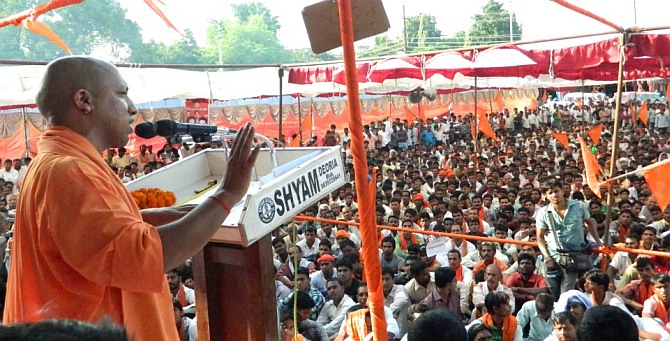 An anecdotal list of communal incidents compiled by Singh describes the vigilante group's involvement in at least 18 separate incidents of communal violence since 1999. While the 2007 Gorakhpur riots, in which a Hindu man was killed and hundreds of Muslim shops burnt, were widely reported, the incomprehensible banality of minor incidents makes for more chilling reading.

In 2002, for instance, Adityanath and his followers arrived at Gorakhpur's Turkmanpur locality and escalated a squabble between a Hindu and Muslim over who spat paan on whom into a full-blown communal confrontation in which stones were thrown, a street brawl erupted and the police were called in.

Adityanath insists the Yuva Vahini is simply a cultural organisation. "Our philosophy is to live and let live, but if someone puts their hand on our throats, we have the right to remove that hand by force if need be," he said.

Yet, his critics, both inside and outside the BJP, said Adityanath's vigilante army was set up to build a power base and grassroots network independent of the the BJP and the Rashtriya Swayamsevak Sangh. BJP leaders begged off from commenting on Adityanath or his politics. "To be honest, I don't have the time," said Varun Gandhi, the BJP's other star campaigner in Uttar Pradesh, before hanging up.

His critics in the Congress were more forthcoming.

"Adityanath is undoubtedly a rabble rouser. His speeches are venomous and vitriolic even in Parliament," said Jairam Ramesh, the Congress leader who most recently served as the Union minister for rural development, "He is more of a politician than a sanyasi, peddling a very destructive ideology of hate and prejudice." 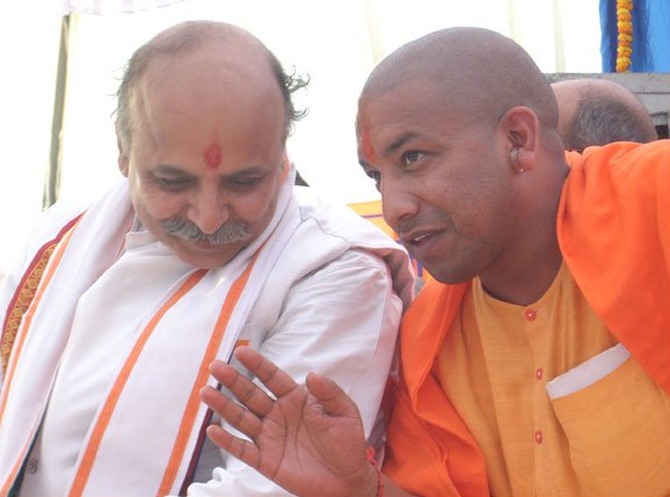 In the meantime, the Yuva Vahini has expanded its influence across the region and its strategy of casting routine street fights as ideological struggles is paying dividends.

Last month in Rasoolpur, a village in Azamgarh constituency, 100 km south of Gorakhpur, a group of Hindu youth decided to build a brick enclosure around a Hindu deity installed under a roadside tree. The Muslims protested, a fight broke out and a young Muslim man was shot. He survived but his friends grabbed Vijay Pratap Yadav, a father of four and the brother of the sarpanch of Rasoolpur, and beat him to death.

Days after Yadav's death, the local representative of the Hindu Vahini contacted his elder brother, Uma Shankar, and asked him to join the vigilantes. "Of course, something will have to be done," Uma Shankar said in a recent interview at his house, "The Muslims have terrorised us."

"The Samajwadi Party thinks it wins because of the Muslims, so let's see what happens when the Yadavs leave it," he said, "I think we will join the Yuva Vahini, and if we do, we will bring another 50 men with us for Yogiji." 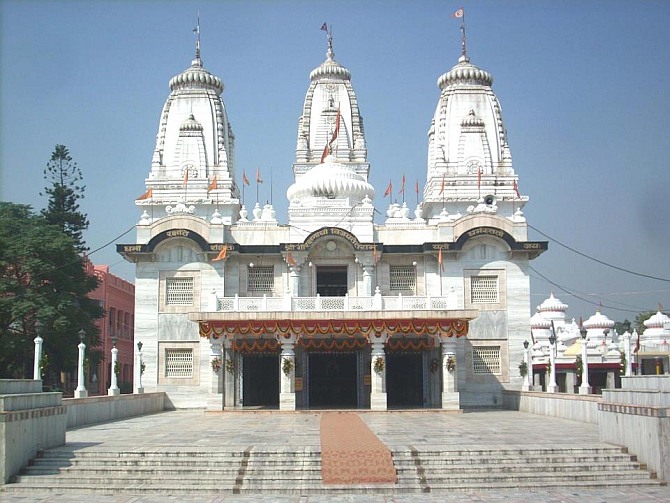 With each generation, Gorakhpur's mahants have harnessed the Goraknath temple to consolidate their unchallenged hold on power