‘We need to assure the Pakistani democratic system, their free press and the middle-class that our quarrel is only against those jihadi elements who are out to create trouble for India.’

‘Enough damage has been done to communal harmony during the election campaign.’

‘Modi should not force his own formula on Pakistan or in the Valley.’ 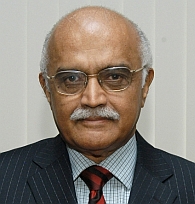 V Balachandran (left), former special secretary, cabinet secretariat, government of India and a member of the Ram Pradhan Committee that probed the 26/11 attacks, talks to Rediff.com’s Vicky Nanjappa on how Narendra Modi, if comes to power on Friday, should tackle terror.

What are the immediate challenges on the security front for the new government?

The immediate challenges are growing communalism in Hindi-speaking states, serious ethnic strife in the northeast, rising domestic religious insurgency, persisting Leftist militancy and the inability of our preventive security machinery to anticipate and deal with such situations. More worrying is the attitude of some state governments in not allowing central investigative agencies (the National Investigation Agency for example) to take over investigation of inter-state terrorist cases which need an all-India approach.

What should be Narendra Modi’s approach to Pakistan?

We cannot overwhelm the Pakistani challenge by threats alone. We need to follow a mature policy of firmness, dialogue, diplomacy and understanding. For this, we need to assure the Pakistani democratic system, their free press and middle-class that our quarrel is only against those jihadi elements who are out to create trouble for India.

The practice of painting everyone in Pakistan with the same brush needs to be stopped. We have to remember that an ordinary Pakistani is as much victim of terrorism as an Indian. The second policy towards Pakistan is not to attempt to force our own unilateral solutions on other contentious issues as demanded by some during the election campaign.


Image: A supporter of Modi kisses his poster in Gujarat

'No readymade solution to this grave problem of illegal migrants'

Does the government face a bigger threat from homegrown outfits or terror emanating from the border?

We face a threat from both. Homegrown terror cannot be sustained without outside help. Our preventive vigilance machinery has to anticipate and thwart such moves. We need to strengthen our vigilance by better intelligence and coordinated ground action.

How should the new government handle the issue of illegal immigration from Bangladesh?

There is no readymade solution to this grave problem. We need the goodwill of Bangladesh’s ruling Awami League government to stop further migration. At the same time, we should not create tension in our northeastern states by calling long-term residents illegal migrants just because of their religion. Enough damage has been done to communal harmony during the election campaign.

A shrill campaign against the Bangladeshi migrants has upset the friendly Awami League government, who had rendered exemplary cooperation on the issue of terrorists holed up in their country. We also need to take our state governments in the northeast into confidence before unilaterally deciding on problem of migrants. In 1998, the Bharatiya Janata Party-Shiv Sena government’s move in Maharashtra to send back alleged migrants without the concurrence of the West Bengal government ended in a fiasco.


Image: Bangladeshis watch Indian officials (not in the frame) take measurements for a border fence at the zero point that divides India and Bangladesh in Agartala
Photographs: Jayanta Dey/Reuters

We should pursue the 26/11 trial going on in Pakistan. The NIA should continue the action in the United States. We should seek international cooperation to prosecute the conspirators. In addition, we should encourage Indians in the US and United Kingdom, who were victims of 26/11 to file class action suits in foreign courts against the Pakistani conspirators.

Will the National Democratic Alliance act on all the recommendations of the Pradhan committee report if it comes to power?

The Maharashtra government has already initiated action on recommendations. Our report was primarily for the state government.

How can the new government balance not antagonising Muslims and also be tough on terror?

We have to instill confidence among them that we are not against the community but only against some misguided people.

Can you compare the NDA and UPA when it comes to handling terror?

It is very difficult to compare. I do not want to blame the previous NDA government for releasing terrorists after the December, 1999 hijacking of Air India's flight IC 814. That was done to save lives of innocent passengers. But I would blame them for not initiating substantial internal security reforms even after the December 13, 2001 Parliament attack although their group of ministers had finalised an excellent report on reforms in February 2001. They were in office till 2004.

The UPA government utterly failed in preventing 26/11 attacks, which they could have done by coordinated navy-Coast Guard-National Security Guard action as they had intelligence prior to the attack. Their failure in sending the NSG promptly to Mumbai was a grave lapse.

'Modi should follow policies of earlier governments on Kashmir'

Do you think the NDA should bring back TADA (Terrorist and Disruptive Activities (Prevention) Act)?

I do not think that terrorism can be fought by laws like TADA. After all, we are facing a bunch of people who have no respect for law or deterrent punishment. So how will a draconian law prevent terrorism? That scourge can be fought only through better intelligence, better ground action, investigation and international cooperation.

How do you think Modi should handle the Kashmir issue?

The Kashmir issue is an old dispute and Modi should follow the policies pursued by the previous Indian governments including the NDA. There is no point in forcing his own formula on Pakistan or in the Valley on such a complicated issue in breach of the policies pursued earlier.