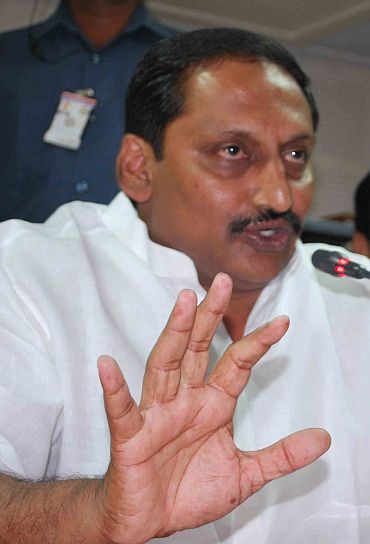 The battle for a separate Telangana state has turned worse with the Andhra Pradesh government making it clear that it will do everything under the sun to restore normalcy but not yield to protestors' demands under pressure.

It is a process and it will take its own course of time, Chief Minister Kiran Kumar Reddy said.

Losses continue to pile up each day. Official statistics show that the state has incurred a loss of nearly Rs 2,500 crore due to these strikes. The invocation of the Essential Services Maintanence Act has not had any impact on the striking employees and the government finds itself in a fix.

Telangana activists say that there is no question of stopping this time, as their patience was wearing out. 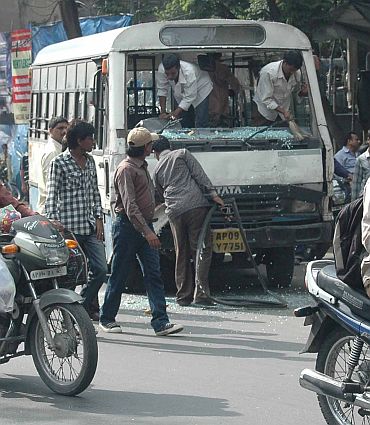 Telangana Rashtra Samiti leader Subhash Reddy and Telangana Students Joint Action Committee chief Dr Prithviraj say that the agitation had become so strong this time, as it had been conducted in a planned manner.

"We had said some time back that it is a people's movement. Moreover, we did not want to throw all our eggs into one basket and hence the agitation was conducted this time in a phased manner. The government may say that the lives of the people are being affected, but then what we would like to ask them is why cannot the government give in to our demands so that everything returns to normal," they say.

Hyderabad has taken the biggest hit. Business establishments are complaining of losses; students are uncertain about what's in store next.

Besides, the power situation too has worsened and the government has decided to impose a power cut in the city. Though the government says that the power is cut only for a couple of hours, residents inform that power cuts last over three hours a day. 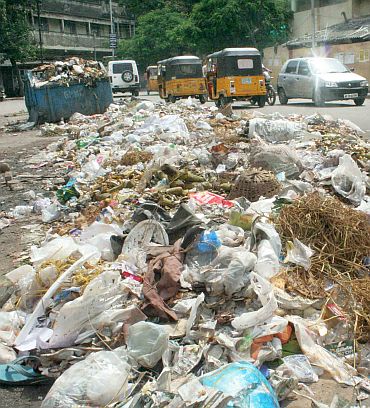 Employees at Singareni have been on strike for the past couple of days and in such a short period in time the power supply to the state has come down to 240 million units from 250 MU.

The government has, for now, imposed power cuts to make up for the loss and is also contemplating buying coal from private companies and neighbouring states to tide over the crisis.

The ongoing agitation has caught the government napping. Telangana activists had, at least a month ago, made it clear that they would target the Singareni Collieries. Just ten days into the strike, the coal output has come down to 28,000 tonnes as opposed to the production of 1.35 lakh tones daily. This agitation here alone has cost the government Rs 100 crore in the past ten days. 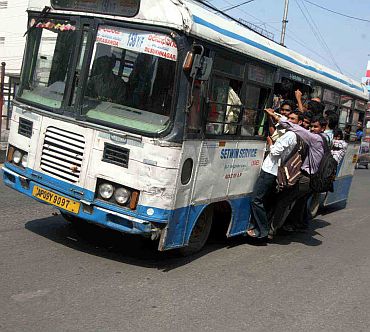 Road transport is another service that has been hit very badly. This has had a direct impact on the rest of the establishments and most people have become virtually immobile.

And the situation will only get worse in the days to come. A rail roko (blockade), which is scheduled for September 24 and 25, could really put the situation out of gear.

A Railway official informed that nearly 55 trains have already been cancelled and many others diverted. 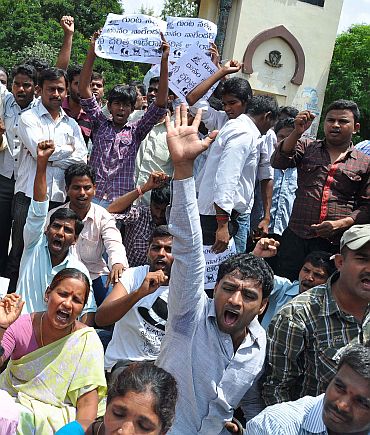 Image: A protest outside Osmania University

The transport strike has also had a hit on the IT companies, which have been reporting very low attendance in the past ten days. Many employees from the Telangana region have stayed away from work intentionally in support of the movement while some are unable to commute, which has ensured a drop in attendance to nearly 40 per cent.

The students, meanwhile, are contemplating how to reach their target of 220 mandatory working days in educational institutions.

Dr Prithviraj, who has led the students in this agitation, says that there is no deliberate attempt to keep the children off school or colleges.

"The students themselves find the need to take part in this agitation and they are ready to sacrifice for the sake of a large cause. No goal can be achieved unless a sacrifice is made," he says. 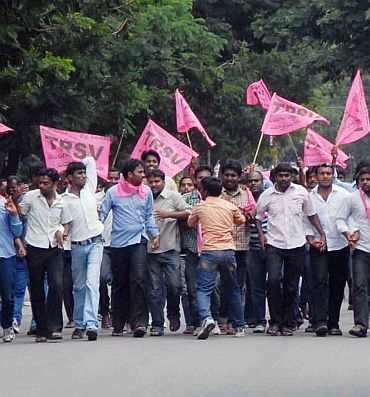 In the past 90 days, schools and colleges in Telangana have remained shut for 30 days.

On one hand there is no sign of the agitation calming down and on the other the holiday season in October is upon them, which would mean that more number of days are going to be missed.

In Telangana, most schools and colleges have been unable to conduct their mid-term examinations and on the syllabus front they have not even completed 10 per cent despite being over half way into the academic year.

The government has, however, decided to be as aggressive as possible while dealing with the issue.

On one hand they speak about talks, but on the other they have decided to take every possible alternative route to resolve the crisis. 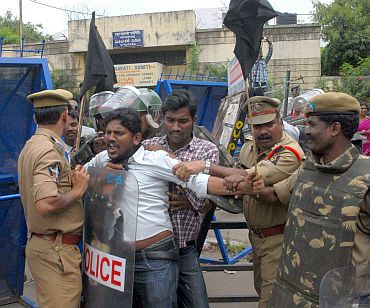 Image: A pro-Telangana protester being detained

During the agitation it was witnessed that nearly 18,000 teachers who are apprentices have joined the agitation. The government has decided not to regularise their services.

The Telangana agitators, meanwhile, feel that these are empty threats.