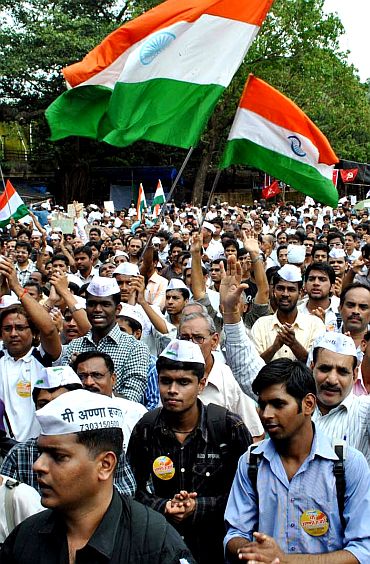 The tremendous response, especially from the youth of the country to a 74-year-old Gandhian, has put paid to many political dreams. It is the leadership vacuum that Anna Hazare has filled, write Col (retd) Anil Athale

Currently India is suffering from a 'leadership deficit' while its economist-turned-prime minister seems to harp on the economy.

It is this vacuum that has been filled by Anna Hazare who seems to have struck a chord with the people. If history is any guide, then our PM seems to follow the fate of Ludwig Erhard, the German finance minister widely credited with the success of the 'German economic miracle' in the 1960s.

His wizardry in economics got him elevated to the post of chancellor where he failed miserably and had to resign in less than three years. To expect an economist to succeed as PM, where different set of skills are required, is akin to expecting Lata Mangeshkar to dance or Picasso to sing!

There have been many explanations offered for the 'Anna phenomenon'.

Rise of the middle class is one, though the talking heads on TV channels, especially those who belong to the 'Poverty Industry', make it sound as if belonging to the hard-working and law-abiding middle class is a sin. 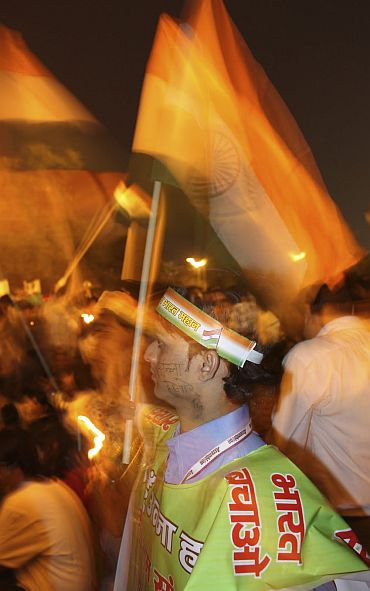 Many seem to long for the time when the poor were in a vast majority.

The political class seems clueless and wants to hark back to the 'Garibi Hatao' days.

We have also had political spokespersons (most of them belonging to political dynasties) questioning the right of ordinary citizens like us to question the 'rulers'.

The interesting and arrogant refrain has been that if one wants to question the 'divine right' of the elected politicians, then one must enter electoral politics -- else you have no right to question the MPs.

It is futile to ask these worthies, if everyone joined politics and did only 'netagiri' who will do the mundane (and according to them 'stupid') jobs like being in the military and guarding the borders, working in factories, farms, banks etc.

Having got the support from not more than 30 per cent of the voters (or to put it other way, having been rejected by 70 per cent of those who voted) and less than 15 per cent of total electorate (that includes non-voters as well), these worthies claim it their democratic right to disregard public opinion.

In the Indian electoral system's first past the post and winner takes all method, even a small margin of votes distorts the final outcome. 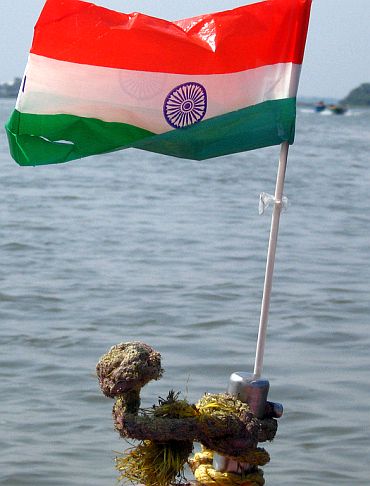 One of our finest chief election commissioners, James Lyndoh, is on record about this failing of our electoral system.

The last elections were a classic example of this.

In the last elections, three individuals and their 'small' parties created a majority at the Centre. Raj Thackeray and his Maharashtra Navnirman Sena, actor-turned-politician Chiranjeevi in Andhra Pradesh and 'Captain' Vijaykant in Tamil Nadu.

But for these stalwarts eating up crucial votes, the UPA would not have got the seats it did in Parliament. But the irony is that none of these three is part of the ruling coalition at the Centre (though, since then, Chiranjeevi has merged his party with the Congress).

Even the latest polls in Tamil Nadu, hailed as a verdict against corruption, clearly show that the Dravida Munnetra Kazhagam that lost power actually got the same percentage of votes. What did the trick was that Vijaykant was on the other side this time.

Crisis at the national level

This leadership crisis seems to exist at the national level only.

At the state level, we have genuinely popular leaders like Shivraj Singh Chouhan in Madhya Pradesh, Raman Singh in Chhattisgarh, Shiela Dikshit in Delhi (before the CWG scam), Tarun Gogoi in Assam and Narendra Modi in Gujarat. The dearth of national-level figures is not confined to the ruling party alone; the Opposition is equally bereft of any leader with an all-India stature. 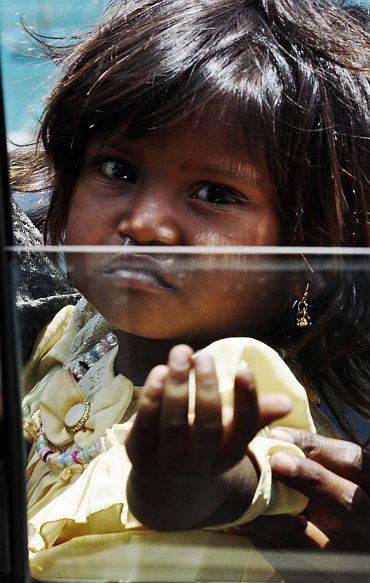 This author is aware that this will raise a howl of protest from some for ignoring Sonia Gandhi. But looking at history, the second Mme Gandhi (the original being the redoubtable Indira Gandhi) is more like Indira Gandhi before the 1971 elections.

Before her master stroke of 'Garibi Hatao' campaign, Indira Gandhi was at best a Congress factional and not a national leader. Rajiv Gandhi captured the imagination of the nation with his push for computer revolution and 'taking India to the 21st century'. Atal Bihari Vajpayee similarly had a plank of 'strong India' and a push for infrastructure.

It is this lack of 'big idea' eluding the national level leaders since 2004 that has caused the leadership vacuum.

The national employment guarantee scheme is old hat and has been in existence in states like Maharashtra for over 25 years.

Taking up isolated causes like land issue in some village in Uttar Pradesh or tribals of Orissa are no substitute for the big idea that captures the imagination of the whole country. It is Anna Hazare who has done this with his all-out war against corruption. 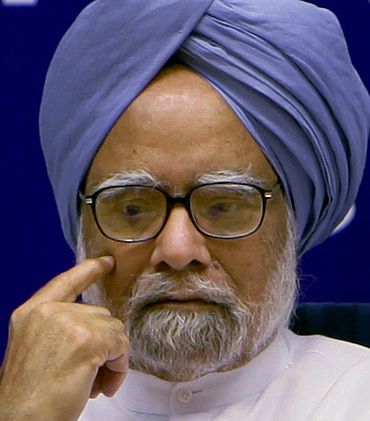 Does anyone remember the prime minister's address to the nation at the time of the 26/11 attack? Let alone inspiring, it actually produced despondency. No person in high office can afford to ignore communication skills. This is especially true in a democracy.

This would have been less of a disaster if the 'political head' of the ruling party, Sonia Gandhi, had been regularly communicating with the aam janata. Sadly, even that has been missing.

The heir apparent is equally illusive and bereft of any new ideas. Chanting the old mantra of 'welfare of poor' or 'inclusiveness' is no substitute for fresh ideas that can capture the imagination of the nation.

Who can dispute that the poor need to be looked after or that economic growth must be inclusive? But our dear leaders have no clue how we reach that goal.

The tremendous response, especially from the youth of the country, to a 74-year-old man, has put paid to many political dreams. It is the leadership vacuum that Anna has filled.
More