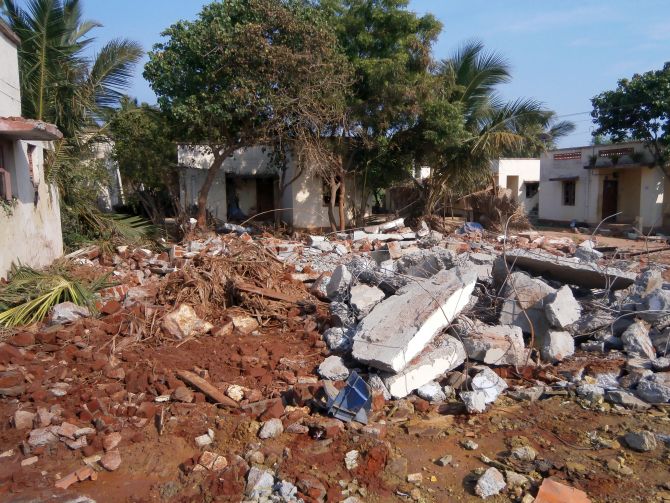 Why were bombs being made in a small village near the Kudankulam Nuclear Power Plant and is the blast in anyway linked to the agitation? A Ganesh Nadar travels to Idinthakarai to find out.

Two days after a powerful bomb exploded in Idinthakarai village in Tamil Nadu, the story that emerges is one of local rivalry gone bad. But what added an edge to the incident was that the explosion took place barely a mile from the Kudankulam Nuclear Power Project. Given the protests that rocked the region against its commissioning, the conclusion was arrived at quickly, that it was part of the protestors’ plan.

And when news agencies reported that the police had filed booked SP Udaykumar, who has been helming the hitherto peaceful agitation, for the explosion the picture was complete.

However, when this correspondent visited the village soon after the explosion on Wednesday night and a day later, what stood out was the intensity of the blast. The explosion was powerful enough to flatten the house in Tsunami Colony where the bomb was being put together, and severely damaging the neighbouring structures.

The explosion claimed seven lives, with five killed on the spot, one dying on the way to hospital and the other on reaching the hospital.

Speaking to Rediff.com, Udaykumar said, “This has happened because of rivalry between two groups in the neighbouring Koothankuli village. One group supports a mineral company there while another group opposes it.” Being outnumbered, the nay-sayers had been driven out of the village, a faction of whom made Idinthakarai their home, all the while planning revenge and strategy to claim back their homes. The bomb being assembled was part of that strategy.

Local rivalry spills over into Idinthakarai 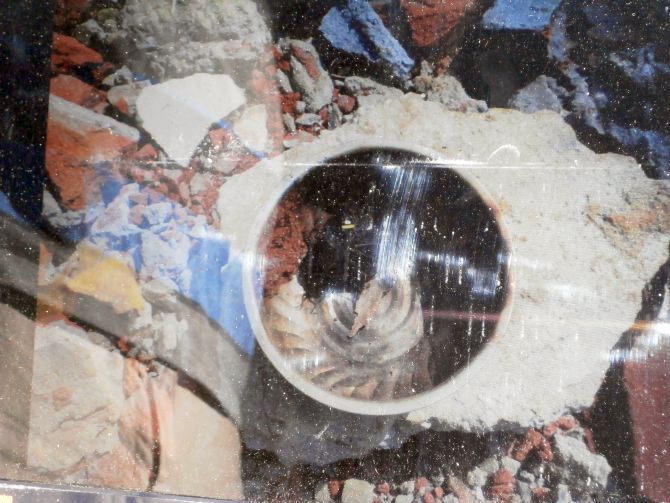 Contrary to what the news agencies had reported, the FIR registered at the Kudankulam police station does not mention any of the anti-nuclear protestors. According to inspector R Jayapaul, who furnished a copy of the FIR to this correspondent, all the three accused were from Koothankuli village, and were the ones putting the bomb together: Yagappan s/o Xavier; Vijay s/o Sandhya Michael; and Jesumariya Susai s/o Sandiya Royyappan. All of them were killed in the explosion, which also claimed two innocent women and two children.

Idinthakarai has been the epicentre of anti-KNPP protests for the last 836 days, with Udaykumar, who stays at the village church, leading the protests for more than two years. Fearing that he could be arrested anytime, the villagers have a 24-hour cordon around him, and have also succeeded in preventing the local police from entering their village.

Which is also the reason the bomb-makers chose this village to execute their plan.

The back story to the bomb plan is the death, a few months back, of a young boy from Koothankuli village under the wheels of a truck belonging to VV Minerals. Though it was an accident, the villagers blocked the roads and started an agitation against the company.

At that time the villagers of Idinthakarai had also joined the agitation for a day to show solidarity with their fellow fishermen.

After a while Koothankuli became so divided over the incident that two factions emerged, one supporting VV Minerals and the other opposing it.

Why bomb-making in Idinthakarai went undetected The supporters were superior in number and strength, and drove out those who were against the company. Those who fled settled down in fishing villages across Tuticorin and Tirunelveli districts.

A few families also came to Idinthakarai and rented homes in the Tsunami Colony there, so named as it was built to shift the fishermen from near the seashore further inland immediately after the tsunami of December 26, 2004.

Fearing that the violence in Koothankuli might spill over into their village, the elders in Idinthakarai asked these villagers to leave, and a few complied. But a few refused to go.

One such family was making bombs in their house.

A fisherman from Tsunami Colony told this correspondent, “These bombs were being made to be used in Koothankuli. They were planning revenge against those who had chased them out of their village. If the bombs had not exploded here, they would have been used to attack villagers in Koothankuli.

“The fact that we don’t allow the police to come here went in their favour. They went undetected till the bombs exploded, killing them instead of their so-called enemies.”

On Thursday Udaykumar addressed the village women in the church after observing a minute’s silence to mourn the dead. “It is a matter of shame for us. We have been protesting against nuclear energy for more than two years and have always been peaceful. Today the peace has been destroyed in our village. Maybe they were not our villagers but they were from our community.

“We must make sure that this never happens here or in any fishing village again. Today I am ashamed to be here and you should also hang your head in shame.”

'The whole world knows what is happening here. Please go away' 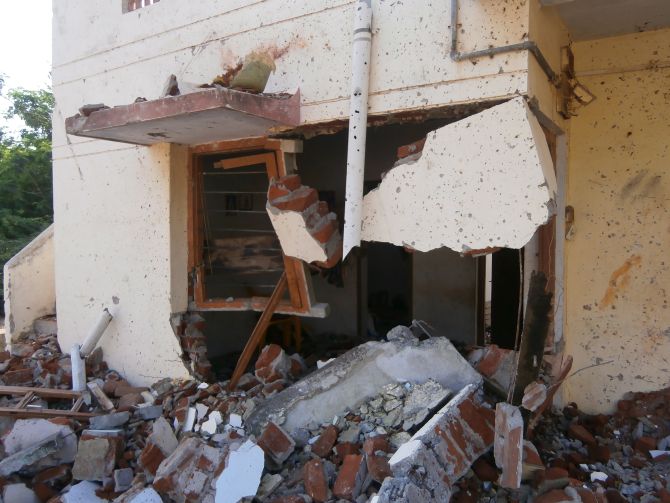 The tension in Koothankuli, when this correspondent visited it on Thursday, was so great that one could cut through it. Villagers glared balefully and no one came forward to speak. “They know that the bombs that exploded were meant for them, naturally they will be tense,” volunteered the driver.

The panchayat president, William, met this correspondent reluctantly on the outskirts of the village. And had only this to say: “Please go away. There are two factions in this village. Whatever I tell you does not matter, one faction will get upset. If I knew that such a situation would arise I would never have stood for elections. Let me complete my term peacefully.”

“You know why the bombs were being made, you must also know the whole story in Idinthakarai itself. There is no need to confirm it here. The whole world knows what is happening.”

However, what no one seems to realise is that the vengeful villagers of Koothankuli who fled to escape the violence there are spread out over two districts in Tamil Nadu, all along the coast. And that the fishermen who died in the blast were not the only ones who knew how to make bombs, so do others.

Naturally, the last word in the internecine feud in Koothankuli has yet to be said.