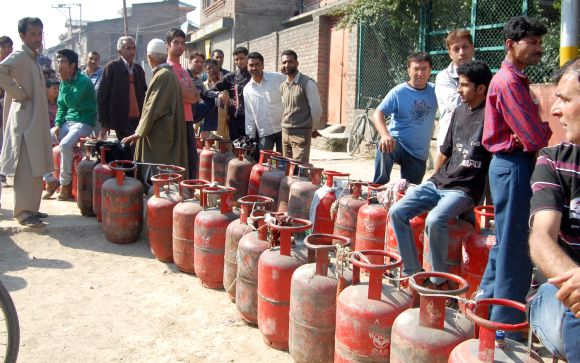 As the state police declined the provincial administration's directive to allow police stations to be used as distribution points for the supply of liquefied petroleum gas cylinders to the consumers, the crisis has only deepened.

The provincial administration's decision to task the state police with distribution of LPG cylinders had come at the end of the yet unresolved crisis of shortage of LPG cylinders in Kashmir at the onset of the winter.

The local police told the provincial administration that its hands are already full dealing with the law and order situation in the Valley and assigning the task of LPG distribution would be stretching the police resources too far.

Thousands left in the lurch due to LPG crisis 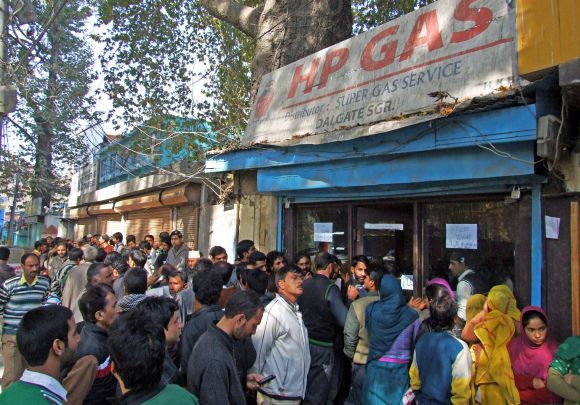 The crisis exploded with the central government's decision to restrict the number of subsidised LPG cylinders to six on authorised connection.

The LPG dealers who sought documents from consumers to verify the legality of their connections have been taking a long time to process the papers.

"Thousands of consumers in the Valley have no documents to present for verification and we have strict instruction to issue refills after proper verification only," said Jagmohan Singh Raina a prominent name in the LPG distribution system in the Kashmir valley.

Singh, however, says that each consumer should have four cylinders to tide over the winter hardships including the closure of the Jammu Srinagar during the winter months.

This has left thousands of consumers in the lurch and the situation has remained unresolved. "The Valley is facing an unexpected shortage of LPG and I don't know what will happen to those consumers who don't have proper documents during the winter months," said Abdul Rashid who says he lost the papers and has been visiting the gas agency for a refill. 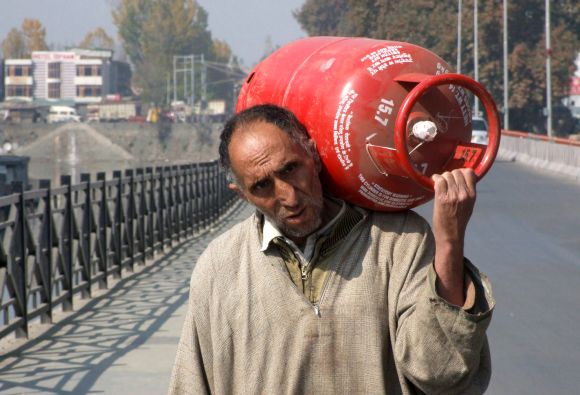 The LPG dealers went on a two-day strike saying they were caught in a bitter conflict between the government and oil companies and don't  know what to do.

The state government has now issued guidelines for those consumers who either don't have any documents or have lost them.

Following protests by the capital city consumers, Chief Minister Omar Abdullah wrote to the petroleum minister seeking his intervention in relaxing the cap of six cylinders in view of the harsh winter months that Kashmir has to face. However, so far there has been no positive response from the centre.

State secretary of the CPI (M) Mohammad Yusuf Tarigami has warned the LPG crisis can 'snowball into a major law and order problem in the state'.

Strangely there are only 43 dealers for over a million registered consumers of the Valley, which some feel is responsible for the present crisis. As people complain of the winter having set in earlier than usual this year, the elusive LPG is only going to make matters worse in the already energy starved Valley.