It is just a drill: Bangladesh fire victims were told 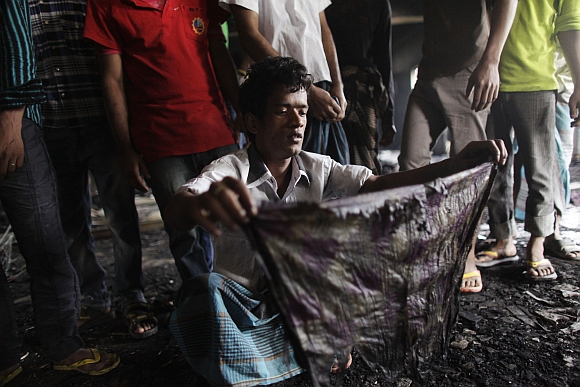 In one of the worst fire tragedies in Bangladesh, a blaze broke out at Tazrin Fashion factory, a readymade garments factory in suburban Ashulia Savar, 30 km from Dhaka, on Saturday night and quickly spread to the ground and first floors of the six-storey building, killing at least 137 people. The tragedy has highlighted unsafe working conditions in an industry, rushing to produce for major retailers around the world.

Rescue work to recover bodies was stopped around evening of November 25 at Tazreen Fashions Limited following the tragic blaze.

Bangladesh will be observing a national mourning day on November 27 over casualties reaching nearly 137 due to this tragic fire and an under-construction flyover collapse in Chittagong, both on November 24. While some police officials claimed that 110 dead bodies have been recovered from the garments factory fire, some media have reported the number to be 123.

However, witnesses and survivors of the blaze alleged that the total number could very well be twice or thrice these amounts as the fire broke out during the ongoing evening shift around 6:15pm on November 24.

Each of the first to the fifth floors of the seven-storied building housed around 400 workers. The ground floor was being used as a store for threads, fabrics etc.

Though the fire broke out around 6:15pm, the fire brigade reached the area three hours later, according to witnesses. Because of the unplanned location of the factory, the fire brigade personnel could only focus their efforts towards the front while the back of the seven-storied building, with 15,000 square feet on each floor, the building continued to burn.

Workers jumped out of the building to save themselves 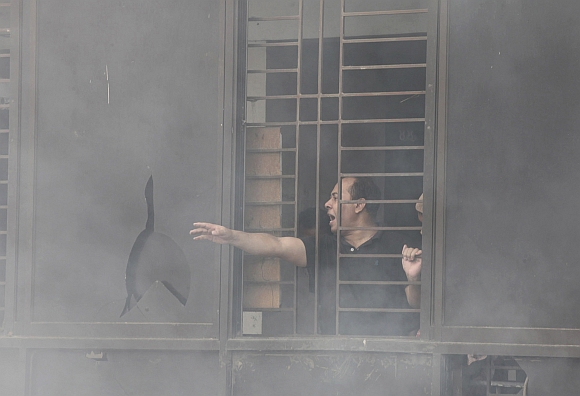 Survivors and witnesses of the blaze conveyed to rediff.com that the workers were basically 'trapped' inside the factory while the fire blazed on. Some, like 32-year-old Alenur Begum managed to jump out of a hole where earlier stood a giant exhaust fan in the factory. Alenur and her colleagues had broken the fan in the midst of the commotion in a bid to escape.

"I was working on the third floor and had scaled the stairs to come down to the second floor," she said. Earlier, Alenur had heard the sirens and with others on the third floor were about to leave the factory when their production manager asked them to go back to work as "Nothing has happened. It is just a fire drill," she said.

These workers had gone back to work. But seven minutes later when they saw smoke billowing out of the stairs, some of them fled to the second floor.

"The workers on the second floor were trapped as the stairs to the first and ground floor was already on fire. That is when we broke the exhaust fan nearby and one by one we jumped outside," she said.

'There were glass bangles all over the floor' 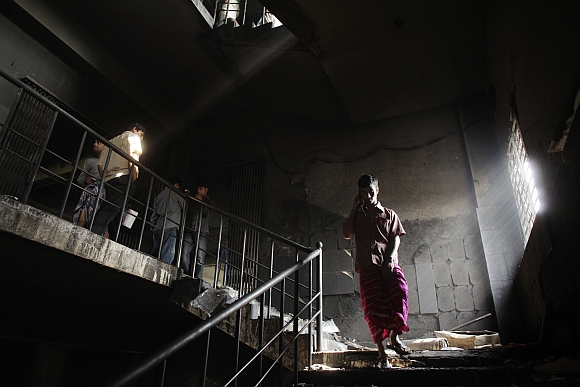 While describing the nightmare on November 25, Alenur, with a left leg broken in three areas, fractured hands and seven stitches on her head, added that her motive was to at least save her dead body for her family. Alenur's husband, Abdul Hamid, later rescued her and took her to the hospital nearby around 9:30pm.

The fates of other workers in the factory were far worse.

Mahfuzul Haque, a journalist of the Daily New Age, had managed to enter the charred building that was earlier Tazreen Fashions Limited on the evening of November 25 when the rescue work had been suspended.

"I walked into the second floor to find a skull. There was no skin on it. The rest of the body was nowhere to be found. There were other body parts here and there. There were glass bangles all over the floor, as mostly female workers had faced the tragedy," he told rediff.com.

Manik Mia, a male worker, was working on the fifth floor of the factory on November 24 when the fire broke out. "Around 6:15pm when the sirens began to blare, I managed to rush down the stairs and ran out of the factory. I witnessed how other workers were trying to leave the buildings on the different floors. But the production managers and in-charges at the floors were rebuking and restricting these workers from leaving the factory," said Manik.

'I could not find her body anywhere' 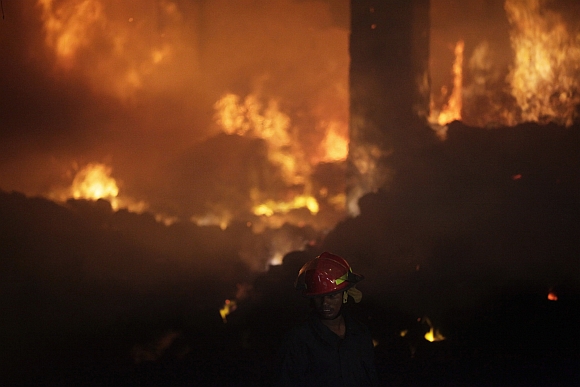 Manik alleged that if these people were allowed to leave when the sirens began, the death toll would have been far less.

Manik's friend Babu was also working on the third floor and had fled the fire with Manik. But his wife, whose name Babu could not remember at the time due to the shock on November 25, was working on the fourth floor. "I have not found her body anywhere," he said.

Mansur, a resident of the tin shed houses neighbouring the garments factory, some of which were also burnt during the blaze, received a call on the day of the fire from his neighbour Kabir, who along with his wife, worked at the factory.

"Kabir said that he was alive but he could not see anything due to the smoke. He was looking for his wife earlier. He then asked me to pray for him as he dreaded he was dying. Then the connection was cut off. I tried a number of times after that. But I think he was already dead by then," said Mansur.

These were just some of the stories of the victims of the fire. While the Bangladesh Garments Manufacturers and Exporters Association have committed to provide Tk 100,000 with Li & Fung, a client of Tazreen Fashions, matching this amount to the families of each dead in the blaze, the tragedy again portrays the hapless state of security and disaster management in factories of south Asia.