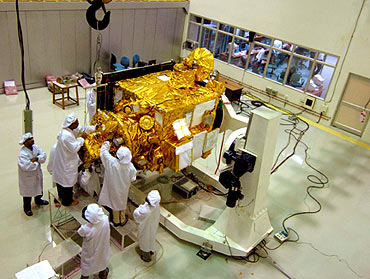 Image: Resourcesat-2, the advanced remote sensing satellite
Photographs: Courtesy ISRO
The Indian Space Research Organisation, which had a recent setback with the failure of its latest communication satellite GSAT-5P, is planning three major satellite launches in the first quarter of this year.

Resourcesat-2, an advanced remote sensing satellite, Youthsat, a participatory scientific mission with payloads from both Russia and India, and X-sat, Singapore's first indigenous satellite, will be the launched on board of homemade PSLV C-16 in February, March and April, ISRO Chairman Dr K Radhakrishnan said. 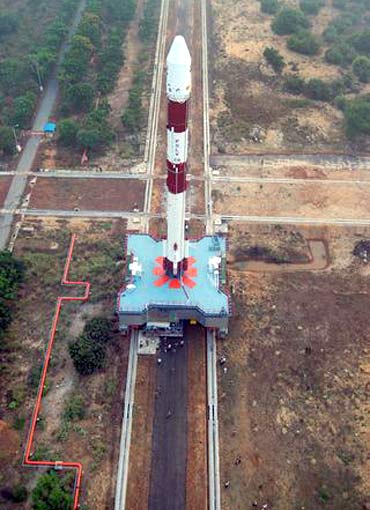 Image: The satellites will be launched by ISRO's PSLV rocket

We have three major missions slated to be done in coming February, March and April months. Among them Resourcesat-2 is meant to replace Resourcesat-1, launched in 2003, to provide data connectivity," said Dr Radhakrishnan during his presidential address to an international conference on 'Contemporary trends in optics and optoelectronics' at the Vikram Sarabhai Space Centre in Thiruvananthapuram.

The Youthsat will carry a payload developed by the students of Moscow University in Russia, Dr Radhakrishnan told the meet organised by Indian Institute of Space Science and Technology and Optical Society of India.

"PSLV-C16 vehicle has already been assembled at the space port at Sriharikota. Resourcesat-2 and Youthsat are getting ready for shipment to Satish Dhawan Space Centre -- SHAR near Chennai from the ISRO's centres. Both these satellites carry a host of advance optical payloads," he said.

Another communication satellite GSAT-8 is getting ready for launch onboard Ariane-5 in April-May 2011. 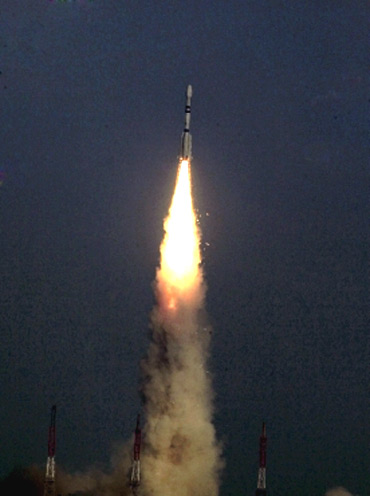 Alluding to the recent failure of GSLV, the ISRO chairman said, "We have several success stories and a couple of failures. We will learn from our failures." The cause of the failure had been pinpointed and I will be able to reveal details only after detailed evaluation and studies, Radhakrishnan said.

"We had nine launches and released nine spacecrafts including the path-breaking Chandrayaan during the four years 2006-09. We saw seven successful missions of PSLV including two dedicated commercial launches, and two missions of GSLV with a failure of GSLV F02 in 2006 and a partial success of GSLV-F04 in 2007," he said.

"We have released seven satellites including the high resolution Cartosat-2 series that brought us into an exclusive club globally," he added detailing India's space programmes in the last five years. 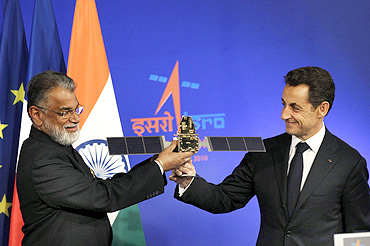 Globally our efforts have been recognised. Several of the world's major space powers Russia, the United States and France have showed keen interest in partnering with India on several fronts in space," Dr Radhakrishnan said.

Microwave remote sensing satellite RISAT-1, meteorological satellite INSAT-3D, communication satellites such as GSAT-7 and GSAT-10 and two Indo-French joint missions -- Megha-Tropiques and SARAL -- are the agency's major plans in the next year, he said.

Emphasising the importance of optical studies in space technology, the ISRO chairman said,  "Optics is second only to microwave engineering in space science. The science has come a long way to this modern age of opto-electronic sensors and devices that find wide applications in myriad areas including space technology, communications, manufacturing, medicine and medical equipment, and bio-photonics, to name a few."