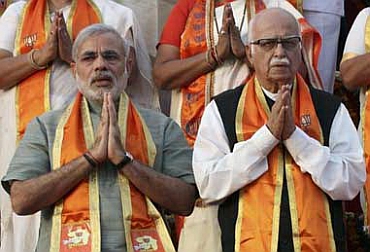 Bharatiya Janata Party patriarch L K Advani's absence in Panaji on Friday cast a shadow on the national executive meeting beginning on Saturday raising doubts whether the party would go ahead with its plans to announce Narendra Modi as head of the campaign committee for the Lok Sabha elections.

Right from the morning, news that Advani was skipping the meeting of office bearers because of "ill health" triggered speculation that it could be linked to his reservations over the Gujarat chief minister's nomination as campaign committee chief.

Party sources said there is no clarity on whether Advani will attend the two-day conclave starting Saturday and this may force the party to give up plans of announcing Modi's name as head of the campaign committee.

However, late night reports said Advani may make it to the parleys. 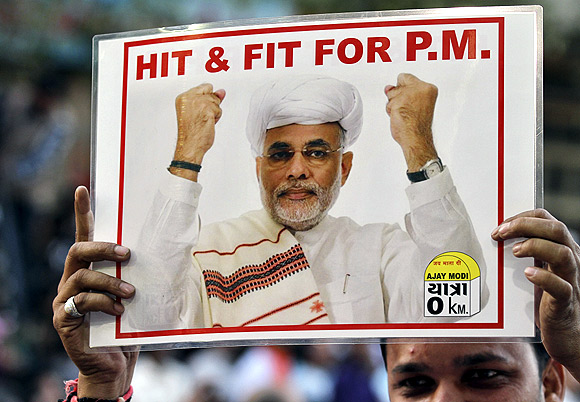 Modi arrived in Panaji to a rousing reception from party workers and Goa Chief Minister Manohar Parrikar said the party should quickly project the Gujarat Chief Minister as its Prime Ministerial candidate.

Party Vice President Uma Bharati, who has already favoured Advani as BJP's prime ministerial candidate, has announced she is not attending the Goa meeting. There are reports that there could be some other abstentions including Shatrughan Sinha and Jaswant Singh.

A senior BJP leader said if Advani skips the conclave altogether, there would be little sanctity in declaring Modi's name. Moreover, Leader of the Opposition in Lok Sabha Sushma Swaraj, who is perceived to be close to Advani and is said to be equally opposed to Modi, will use the absence of the senior leader as an opportunity to seek postponement of the decision on the issue. 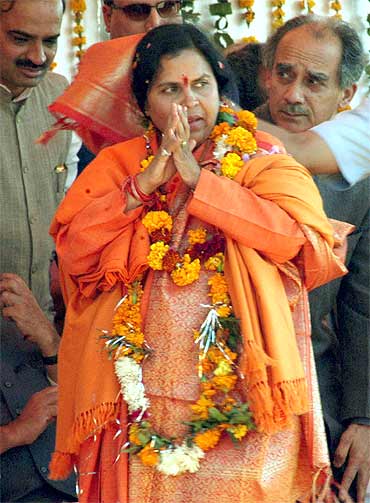 While Advani has cited ill-health as the reason for keeping away from the office-bearers meeting, most party leaders accept privately that his opposition to Modi is the real reason.

BJP sources said Swaraj delayed the start of today's office-bearers' meeting by more than an hour as she is said to be unhappy with the developments.

A couple of other leaders like Jaswant Singh and Shatrughan Sinha also stayed away from the Goa meeting on health grounds, which detractors exploited to taunt BJP saying "Modi was making leaders sick".

While Vice President Uma Bharati, an Advani supporter, has decided not to attend the meeting, another MP Yogi Adityanath openly demanded that Advani be made the prime ministerial candidate by BJP and NDA.

BJP President Rajnath Singh reportedly talked to Advani on phone and requested him to attend the conclave.

However, BJP spokesperson Sudhanshu Trivedi denied that Swaraj is unhappy and this had led to the delay in the office bearers meeting.

"These are very peculiar reasons which are being given. I am not aware of this," he said. 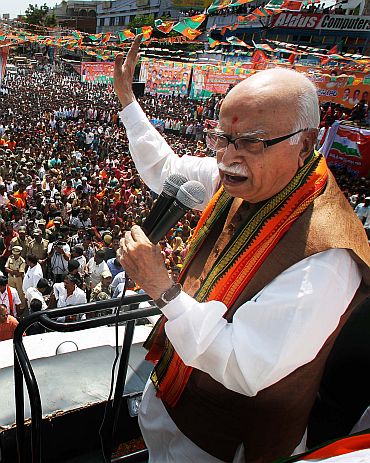 Modi supporters in the BJP national executive are of the view that he should be appointed head of the campaign committee as this will enthuse the party cadre and give a boost to its electoral prospects in the 2014 polls.

Rajnath Singh, who wants to evolve a consensus and take all leaders along on Modi, is not likely to go ahead if Advani is not on board.

A section within the BJP feels Advani may agree to attend the two-day executive only if the top brass gives him an assurance that Modi's name as head of the campaign committee will not be announced at the conclave.

Meanwhile, BJP denied all reports of Advani's unhappiness or there being a divide in the party over Modi.

"The reasons for Advani's absence are not those that the media is thinking... There are no camps or groupism in BJP," Trivedi said.

Senior leader M Venkaiah Naidu also asked the media not to read too much into Advani's absence. He said Advani would attend the meeting on Saturday.

But the likelihood of Modi's name being announced as head of the BJP campaign committee for the 2014 Lok Sabha polls at this conclave seems to have run into a roadblock.