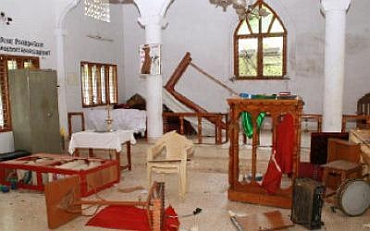 A nationwide report points out that in 2011, 172 incidents have been reported from across the country in which churches and Christians have been attacked. Karnataka tops the list with 47 incidents followed by Odisha with 25 incidents. Vicky Nanjappa reports.

The spate of attacks on Christians and churches across India has seen an increase in the last three months. Karnataka in particular has made headlines as synchronised attacks took place in churches in Mangalore. Some activists complain that these attacks were a result of forcible conversions undertaken by some Christian missionaries.

While the debate on forcible conversions continues, a report suggests that Karnataka has the dubious of reputation of topping the list as far as attacks on Christians are concerned. 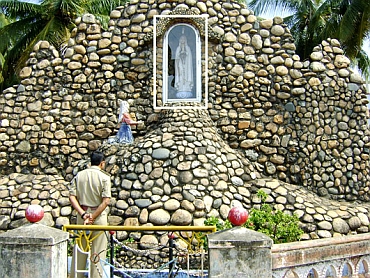 Dr Sajan George, president of the Global Council of Indian Christians, whose team prepared a nationwide report on such attacks says that in the midst of all great progress achieved by India, the most painful is the systematic attacks on churches and those belonging to the minority community by anti-Christian fundamentalists in different parts of the country.

The other states that have witnessed such incidents are Madhya Pradesh (15), Kerala (10), Tamil Nadu, Chattisgarh, Uttar Pradesh, Andhra Pradesh and Maharashtra have reported six attacks each. 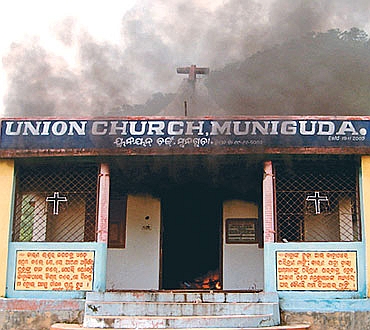 According to the complaints lodged at various police stations these incidents are of murder, maiming of people belonging to the minority community, leaving victims handicapped for life, says the report.

Other incidents include demolishing or burning down churches, destroying or desecrating of Christian literature like the Bible, the Eucharist, hymnbooks, vestments, musical instruments and furniture and destroying vehicles used by churches. Incidents of forcibly taking over of Church properties, burial places, personal properties of Christians have also been reported.

Dr George points out that in Karnataka the attacks have increased since the Bharatiya Janata Party came to power in the state. Various Christian-baiting Sangh Parivar outfits can now go about attacking the minorities with impunity either openly or covertly supported by their political mentors, he said. 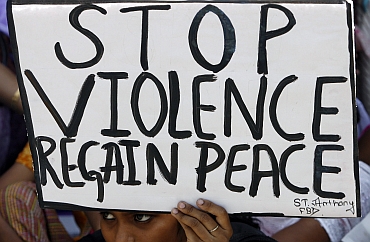 Odisha on the other hand has witnessed three murders last year. The report states that there is an attempt being made to hush up these cases despite there being sufficient witnesses and evidence to prove that innocent Christians were targeted.

"It is tragic that certain forces in the country are determined to carry on the cycle of violence. Otherwise, how can one explain the fact that the fundamentalists in Kandhamal could go to the extent of declaring a shutdown in the district from December 23 to December 27? This was to deny Christians from celebrating Christmas," said Dr George. (There was a shut down in the district on December 26).

In Bengaluru, 200 fundamentalists attacked the Agape Bible Church on December 12.

Justice M F Saldanha, who has prepared a detailed paper on the church attacks in the Karnataka, points out that such incidents should be treated as acts of terror. "Attacks on churches are very much a reality and they continue even to this day. The last three months have seen an increase in the attacks on Christians and churches," he said.