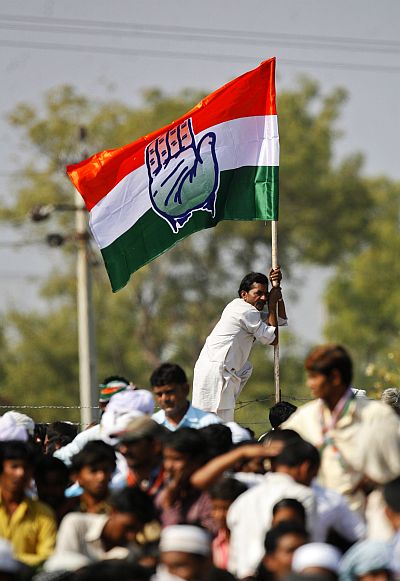 Image: Some in the Congress feel that early elections is the only way to improve its poll prospects
Photographs: Amit Dave/Reuters Anita Katyal in New Delhi

Voices in the Congress pressing for simultaneous Lok Sabha and assembly elections this year-end are getting louder, reports Anita Katyal.

The general election is scheduled for next April while assembly polls in Madhya Pradesh, Rajasthan, Chhattisgarh, Delhi and Mizoram are slated for late November or early December.

There are heated deliberations in the Congress these days about the timing of the next elections. Although the official line trotted out by party spokespersons is that the Lok Sabha poll will be held as per schedule, the discussion about the forthcoming polls has gathered momentum following a spate of recent election surveys which paint a grim picture for the ruling Congress-led United Progressive Alliance government.

Similarly, its internal surveys have also not been particularly encouraging for the party.

Consequently, there is a growing view in the Congress that it would be advisable to club the Lok Sabha and assembly polls because the coming days may see a further slide in the party’s popularity ratings instead of showing any improvement. With corruption charges, price rise, a weakening rupee and an industrial slump casting a long shadow on the party’s electoral prospects, the number of Congress leaders and ministers wanting a December general election is growing.

Congress unsure about the Modi impact 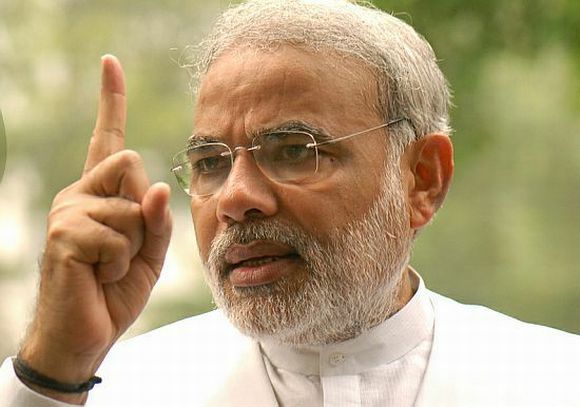 Image: At present, Modi is an imponderable factor, remarks a Congress minister

Those who do not want the election schedule altered point out that that the UPA needs time to implement its flagship programmes like the Food Security Bill and the Direct Benefits Transfer scheme so that its benefits percolate down to the people while a good monsoon promises a bumper kharif crop and excellent rabi sowing. All these factors, they say, will work in favour of the Congress.

On the other side, it is being argued that advancing the election will take the opposition camp led by the Bharatiya Janata Party by surprise and give them less time to prepare for the polls.

As it is, the BJP rank and file is already feeling energised ever since Gujarat Chief Minister Narendra Modi was named the party’s campaign committee chief.

Getting into poll mode, the BJP has set up several committees to prepare for elections while Modi is slated to address 100 public meetings and rallies in the coming months.

The Congress is clearly nervous that Modi’s powerful oratory and PR skills will further queer the pitch for the already-beleaguered party. Although the Congress has adopted a nonchalant attitude towards the Gujarat strongman in public, the party is not sure about the impact Modi will make across the country.

“At present, Modi is an imponderable factor. Instead of giving him time to create a wave in BJP’s favour, it might be a good idea to deny him the opportunity to do so,” remarked a senior Congress minister.

It is also felt that if the BJP does well in the year-end assembly polls, the saffron outfit will become more aggressive and mount a scathing campaign against the Congress which will be difficult to counter.

Here comes the season of alliances! 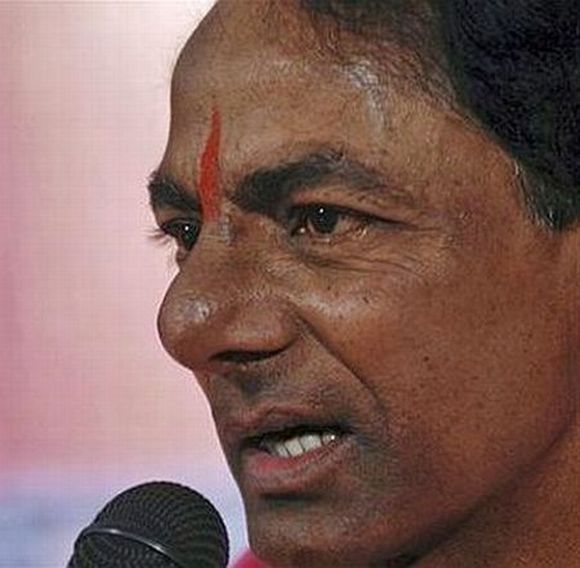 For all purposes, the monsoon session of Parliament commencing on August 5 will be the last one when the government can expect to push through its legislative agenda. It will be difficult to conduct any business in the winter session as it will be convened at a time when major political parties will be preoccupied with the ongoing assembly polls and will be positioning themselves for the upcoming Lok Sabha election.

Although there is no finality on this issue, the government and the party are moving fast to tie up all possible loose ends just in case it eventually opts for an early poll. It was for this reason that the UPA government took the ordinance route for the food security bill and is rushing ahead with its reforms agenda.

Besides pushing for the passage of the food security bill in this session, the ruling alliance would also like other priority legislations like the Land Acquisition Bill, the Street Vendors Bill, Real Estate Bill and the banking and insurance bills to be passed in this session.

The Congress is also trying to get its act together on the political front. After years of dithering, the party eventually decided to accept the demand for the formation of Telangana as it could not afford to linger any further over this sensitive matter.

Despite its strong denials, it is no secret that the Congress was forced into this decision primarily for political reasons. Faced with a certain rout in the coastal and Rayalaseema regions of Andhra Pradesh, the Congress thought it prudent to back a separate state of Telangana in the hope that this decision will boost its electoral prospects in the ten districts of the proposed state.

This decision has also opened up the possibility of Telangana Rashtra Samiti merging with the Congress before the coming elections.

While back-channel talks are on with TRS chief K.Chandrashekhara Rao, the Congress has moved ahead on sewing up an alliance with the Jharkhand Muklti Morcha with an eye on the next general election.

The JMM has promised the Congress a lion’s share of Lok Sabha seats in exchange for its support in Jharkhand.