Irked by US, China warns war against neighbours 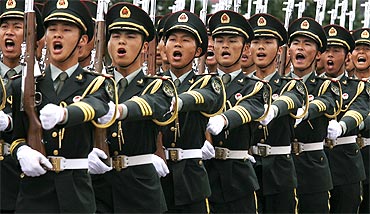 Terming United States' attempts to woo India and other neighbours of China as 'unbearable,' an article in a Communist party magazine has said that Beijing must send a 'clear signal' to these countries that it is ready to go to war to safeguard its national interests.

The article published in the Qiushi Journal, the official publication of the ruling Communist Party of China said China must adhere to a basic strategic principle of not initiating war but being ready to counterattack.

"We must send a clear signal to our neighbouring countries that we don't fear war, and we are prepared at any time to go to war to safeguard our national interests," the article said, suggesting an aggressive strategy to counter emerging US alliances in the region. 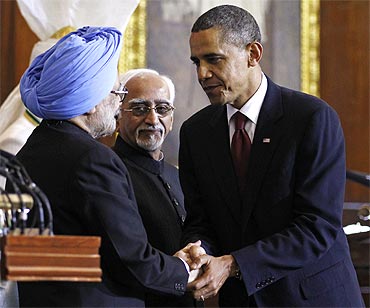 "Throughout the history of the new China (since 1949), peace in China has never been gained by giving in, only through war. Safeguarding national interests is never achieved by mere negotiations, but by war," it said.

The piece said countries like Japan, India, Vietnam, Australia, the Philippines, Indonesia, and Korea are trying to join the anti-China group because they either had a war or a conflict of interest with China.

"What is especially unbearable is how the US blatantly encourages China's neighbouring countries to go against China. We cannot completely blame the US, as flies do not stare at seamless eggs.

"They are attempting to gain benefits by using US," it said. It suggested that China should use its economic clout and trade as a weapon to rein in neighbours.

"China's neighbouring countries need China's international trade more than China needs them, with the vast majority of China's trade deficit caused by these countries," it said.

"Therefore, they, but not China, will suffer greater damage by antagonising China. China should make good use of these economic advantages and strategic power. This is also the most effective means to avoid a war," it said.

'Attacking a nearby enemy is an option' 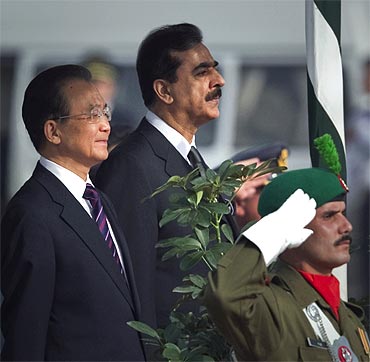 The article said the US has adopted a series of strategies to contain China like through an exchange rate war, through a public opinion war, besides launching military exercises and simulated warfare, and the development of an anti-China alliance.

China on its part, it said, can consider the idea of launching economic warfare through strategies to contain the US dollar and making effective use of forums like the International Monetary Fund and initiating a space war by developing strong space weapons.

It also suggested as a counter-strategy the idea of pursuing a strong policy against neighbours joining the US alliance, even attacking a nearby enemy and forming anti-US alliances in Latin America and Africa. 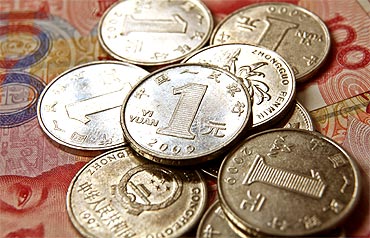 Image: Chinese one yuan coins are placed on 100 yuan banknotes in this illustrative photograph taken in Beijing
Photographs: Petar Kujundzic/Reuters

It also said the China should also launch a public opinion war by making an effective use of the free media in the US and other democracies.

Though suggesting a hard-line policy towards neighbours, the article, however, proposes to rope in countries with good foreign reserves like India to neutralise the influence of US dollar.

"Of course, to fight the US, we have to come up with key weapons. What is the most powerful weapon China has today? It is our economic power, especially our foreign exchange reserves ($ 2.8 trillion). The key is to use it well. If we use it well, it is a weapon; otherwise it may become a burden," it said.

China, it said, should ensure that that fewer countries should keep their forex reserves in US dollars.

"China, Japan, the UK, India, and Saudi Arabia are all countries with high foreign exchange reserves," it said analysing each country's ability to align with China against the US.

"Japan is constrained by the Japan-US Security Treaty and will not break away from the US... Great Britain has always followed the US, so the probability that it will cooperate with China is also pretty low," the article stated. "India has stayed closely allied with the US in recent years, and Obama promised to support India for a permanent membership in the United Nations Security Council. Thus, the probability for India to cooperate with China is also not great," it said.

"India's purchasing power of foreign exchange reserves is very limited anyway, so it cannot influence the overall situation much," it said.

So in view of this China should "pick up courage" and go for aggressive buying of other currencies, including the Indian Rupee hence taking the lead in affecting the market for US dollars.

This approach, it said, is market-driven and it will not be able to easily blame China.

"Of course, the most important condition is still that China must have enough courage to challenge the US currency. China can act in one of two ways. One is to sell US dollar reserves, and the second is not to buy US dollars for a certain period of time," which will weaken the currency and cause deep economic crisis for Washington.

Given the fact that China is the biggest buyer of US debt, its actions will have a demonstrable effect on the market.

"If China stops buying, other countries will pay close attention and are very likely to follow. Once the printed excess dollars cannot be sold, the depreciation of the dollar will accelerate and the impact on Americans wealth will be enormous," it said.

"The US will not be able to withstand this pressure and will curtail the printing of US currency," it said.