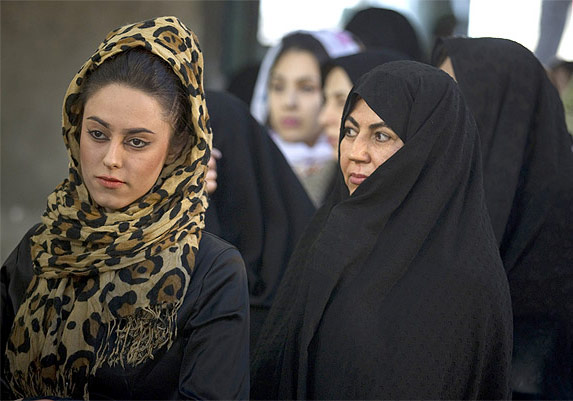 Nikhil Lakshman finds out more about the mysteries of Tehran.

It seems like I am in some surreal movie, you know the ones where every consecutive scene is more bizarre than the one preceding it. Each time I turn, I see a young woman --- girl would be more apt, really -- with a bandage on her nose.

At first, I think it is the same young lady, confused as I am by the numbers of women with identical nasal injuries that I encounter. Then, I realise that these ladies would need to be tele-mobile to be in different Tehran locations at almost the same time. It is thus that I stumble on the Case of the Bandaged Nose.

In the Islamic Republic of Iran, a woman must cover every part of her body in a chador, a shapeless black or brown coat, and ensure that her hair is shrouded in a hijab. Only the face can be left uncovered. The regime's morality police rigidly enforce these diktats that came into force shortly after Ayatollah Khomeini came to power in February 1979.

Until then, under the Shah of Iran's otherwise despotic rule, Iranian women were used to wearing the latest fashions from the West. Now there is an entire generation of women -- more Iranians today have only known one ruler; the ayatollahs and their religious quirks -- who are dependent on touching up their face, by cosmetics or surgery -- to enhance their facial appeal.

Many Iranian girls, I am told, go under the plastic surgeon's knife as soon as they are in their late teens, to give their noses -- whatever their original shape -- cosmetic symmetry, slightly upturned curvature or a Nefertitian nasal appearance. These surgeries are not cheap.

It is not enough now just to have a pretty nose. Since that is so common in Tehran, plastic surgery these days, one Iranian woman told my colleague Jayanta Ghosal, Editor, Delhi, of the celebrated Bengali newspaper, Ananda Bazar Patrika, has extended to the eyes and lips, trying to make a discernible difference in young Iranian women who sadly all look somewhat the same to me.

Enhancing breast surgery, the young woman told Jayantababu, has also made a tentative appearance in Tehran, but one doubts if it will become as common as facial transformations, given that an Iranian woman's body must be shrouded in that shapeless coat, suppressing every curve that may 'stimulate' (how often one heard that word during our three-day visit to the IRI) the male of the species.

For a government that ceaselessly meddles in the private lives of its citizens -- and mandates how the sexes should interact with each other -- the mullahs have mystifyingly turned a Nelson's eye to the Bandaged Nose epidemic. Just weeks ago, hardliners in the Majlis, the Islamic parliament, boomed angrily about the way young Iranian women were allowing their hijabs to slip, giving glimpses of their well-groomed hair.

It was the unlikely figure of President Mahmoud Ahmedinejad who leapt to the young women's defence, telling the hardliners that they are 'our children' and disapproving of any harsh measures against the ladies who transgressed the code of correct attire.

The Death to America hoarding, which has so often been photographed as a symbol of the ayatollahs's aversion to the 'Great Satan' (as the US was denounced in the Khomeini era) was located close to the hotel where the Indian media delegation accompanying Prime Minister Manmohan Singh to Tehran stayed last week.

Ironically, the Islamic hardliners, so anxious to denounce and erase all American and Western influences at all times, have failed to defeat the almost totemic Western feminine adherence to cosmetically enhanced pulchritude in their own society.

Tehran's general stores -- the few that were open during the NAM summit -- were full of American (Schwarzkopf, for instance) or copycat American beauty products.

The confrontation between Iranian women and the guardians of an Islamic theological State is constant, ongoing. Young women were in the vanguard of the democracy protests of 2009 after Ayatollah Ali Khamenei -- who has one of those Star Wars kind of extraterrestrial designations (Supreme Leader) -- deemed Ahmedinejad had won the presidential election over the more liberal candidate Mir Hossein Mousavi.

Retribution has come swiftly, in repeated expressions of repression directed against women -- in the periodic assertion of the dress code, for instance. Hardline clerics like Ahmad Jannati and Ali Mottahari have pilloried the Ahmedinejad presidency for its moderate approach to the hijab in its second term.

After he was first elected to the office in 2005, anxious to cultivate a more-mullah-than-the-mullahs image, Ahmedinejad set the morality police after women who displayed hair or skin. He has been more conciliatory in his final tenure, advocating a more permissive approach, especially during the humid Iranian summer where women have to don the chador and hijab, no matter how sweltering the heat.

Jason Rezajan reported in the Washington Post last month that 53 coffee shops and 87 restaurants in Tehran were shut down in July for 'gender-related offences' like serving women who wore the hijab inappropriately or smoking the flavoured water hookahs at some Tehran eateries. The harshest onslaught against young women in recent times has come with the news that 36 universities -- including Tehran University, 'Iran's oldest institution of higher education' -- will exclude women from studying 77 subjects including accountancy, business management, chemistry, computer science, education, engineering, English and nuclear physics from this academic year, which begins later this month.

UNESCO notes that 52% of Iranian students who graduated in 2009 (the last year for which figures are available) are women. About 70% of recent science graduates, according to another estimate, are women.

Iran's Science Minister Kamran Daneshjou -- who last year announced policy to segregate the sexes at university, a move Ahmedinejad, to his credit, opposed -- is cited as the architect of this action as well, provoking Iranian Nobel Laureate Shirin Ebadi to tell the United Nations in August, 'the Iranian authorities cannot tolerate women's presence in the public arena... They are trying to push women back to private sphere of their homes so they may abandon their opposition and legitimate demands.'

Haleh Esfandiari, the Iranian-born director of the Middle East programme at the Washington, DC think-tank, the Woodrow Wilson International Centre for Scholars, and author of the book, My Prison, My Home: One Woman's Story of Captivity in Iran, told PBS.org last month, 'In recent years, women have been winning more places in universities in competitive, nation-wide exams. These news measures seem intended to redress the balance in men's favour.'

'But politics may also be a factor in the education restrictions,' Esfandiari felt, 'partly because young educated women were at the forefront of street protests in 2009... The impact of these recent decisions, which indicate the growing conservative influence, are almost certain to deepen discontent among young women.'

As a clergyman recited from the Quran to commence the NAM summit, the young lady mentioned earlier in this feature told Jayanta Ghoshal how suffocated she and other young women like her feel in her country. Facebook is banned in Iran, so she logs in under a different, false, identity.

Iran is a society where everyone looks over one's shoulder,so she would not give Jayantababu her real name or her e-mail id, but promised to write to him when apparently she felt safe.

The Shah of Iran's dreaded security service Savak -- which mercilessly tortured and annihilated the monarch's opponents -- was the role model for similar organisations that subsequently sprung all over the neighbouring Arab world, in Hafiz-al Assad's Syria, in Muammar Gaddafi's Libya, in Saddam Hussein's Iraq, in Hosni Mubarak's Egypt. Savak may be history, but the culture of fear and intimidation it spawned stays on in Iran.

Candour is carefully apportioned out in Tehran, and only when the speaker is assured that s/he will not be betrayed to the regime. Few -- even wizened Iranian journalists at the NAM media centre -- dare to criticise the ayatollahs in public, especially to a foreigner. But the young, well, they have the audacity of youth.

One hears of carefully drawn up guest lists where young people of both sexes mix and party freely -- events forbidden by the clergy and their enforcers, the morality police. One even hears of night clubs in Tehran that operate on the sly.

The ayatollahs may cast America as the perennial bad guy, but walk through Tehran's streets or shopping centres, and one encounters countless young men, encasing their well-sculpted bodies, in tight T-shirts (usually with an Americanism on the chest; ironic, since the guys usually can't speak English) and stylish jeans (which incidentally is also what almost all young Iranian women one encounters wear under their chador).

Abbas Kiarostami, the great Iranian director, may arguably be the world's finest filmmaker alive, but Tehran's DVD stores are full of Hollywood movies like Kung Fu Panda 2. "Bollywood better watch out," one Iran-watcher tells me, "Hollywood is catching up quickly." (An aside: The Hinduja family, who have been the influential Indian insiders, both in the Shah's and his successor mullahs eras in Tehran, are said to have made millions exhibiting Raj Kapoor's Sangam in Iran.)

Hollywood movies are not the only Western lure for young Iranians. Some -- if not many -- of them are captivated by the possibility of escaping a society that curbs their youthful fervour and limits their liberties each day. One pretty young lady is close to achieving that dream. She confided to Rajasthan Patrika's Vijai Trivedi that she, a devout Shia (Iran has the world's most number of Shias; India comes second!), had found love on the Internet and will soon move to a Western country to marry a Gujarati Jain!