Introducing the NEW Delhi Cabinet (all 6 of them!)

From a fellow IIT alumnus to an architect who quit his government job due to rampant corruption to a man who had to give up his educational dreams due to lack of funds, Delhi Chief Minister Arvind Kejriwal's Cabinet has some interesting members. Let's take a look at the ministers in the spanking new Delhi government... 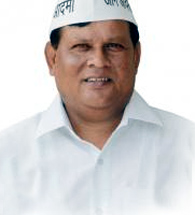 One of the two Dalit faces in Arvind Kejriwal's Cabinet, Girish Soni has come a long way from the youth who had to give up on his higher studies owing to financial problems.

The 49-year-old Member of Legislative Assembly defeated Bharatiya Janata Party's candidate Kailash Sankla by a little over 1,100 votes to emerge victorious in the Delhi assembly polls.

Soni, who had been associated with the Bharat Naujawan Sabha in 1980, was also the general secretary of the party in his constituency.

He had tirelessly participated in AAP's Bijli-Pani agitation -- against the high power and water tariffs levied by the Congress government -- and motivated people to join the movement as well.

The AAP leader did his primary and high schooling from Madipur but owing to financial problems, he was unable to pursue higher education.

Instead, he opted for a diploma course in air-conditioning and refrigeration from the Industrial Training Institute in Delhi.

Soni has been given charge of labour, skill development and Scheduled Caste/Scheduled Tribe departments.

Sisodia, who is considered to be the closest aide of Delhi CM Arvind Kejriwal, came to prominence during Anna Hazare's movement for the Jan Lokpal Bill in 2011.

The 41-year-old is also part of the AAP's Central Working Committee.

He has been given charge of the departments of education, PWD, urban development, local bodies, land and building.

The journalist-turned-activist-turned-politician defeated BJP's Nakul Bhardwaj by over 11,000 votes from Patparganj constituency in East Delhi.

Sisodia had worked as a journalist with Zee News and All India Radio for a long time. He later quit journalism to participate in the agitation for Right To Information.

He was one of the founding members of the Jan Lokpal agitation and part of the team which chalked out its first draft. When Anna Hazare was arrested and sent to jail during the agitation, he too was sent to prison.

Sisodia also sat on a fast for 10 days to demand the setting up of a probe team to investigate cases against corrupt Union ministers.

Sisodia had declared assets worth Rs 41,83,942 in his election affidavit. He has a diploma in journalism from Bhartiya Vidya Bhawan.

An engineer by profession, Saurabh Bhardwaj pulled off an upset win in the high-profile Greater Kailash constituency by defeating the scion of a veteran BJP leader.

Bhardwaj fought the elections in the BJP stronghold and defeated Ajay Kumar Malhotra, son of outgoing Leader of Opposition V K Malhotra, by more than 13,000 votes in the South Delhi constituency.

"Bhardwaj was working in a private firm when in 2005 a horrendous incidence of rape happened with a poor girl...He studied law and regularly helps the poor in giving them all legal help possible," stated the AAP party website.

He works for the visually impaired, the elderly and the economically underprivileged.

Saurabh Bhardwaj has been given charge of the transport, food, civil supplies and environment ministries.

At an age when most youngsters struggle to find their feet, 26-year-old Rakhi Birla is not just the youngest minister in Arvind Kejriwal's Cabinet, but also the only woman in it.

Birla had emerged as a giant killer after beating four-time MLA and PWD Minister Raj Kumar Chauhan in the Sheila Dikshit government in Mangolpuri by nearly 10,500 votes.

Before joining the AAP, Birla had worked with a private news channel. She had also been working in collaboration with social organisations for the cause of the Valmiki community.

Her father was associated with the Congress for a long time, but he quit the party in 2011 during the Jan Lokpal movement.
.
Birla had declared assets worth Rs 51,150 in her election affidavit. Her family has been associated with social work since the last four generations, according to the AAP website.

During her stint as journalist, Birla covered the Jan Lokpal movement and came in contact of India Against Corruption and Arvind Kejriwal.

Birla will handle social welfare and women and child development departments. She has also been given the additional charge of drawing up a plan of action to enhance security for women.

Satyendra Kumar Jain, an architect by profession, quit his job with the Central Public Works Department due to prevailing corruption in the department and turned to politics.

He has been allocated the health and industries department in the Kejriwal-led Delhi government.

He is also associated with social organisation Sparsh, which works for mentally challenged children. He also organises mass marriages for poor girls, according to the AAP website.

Among the several giant killers that the nascent party introduced in Delhi elections, Bharti toppled the former education minister.

After earning a Masters degree from the Indian Institute of Technology and a degree in law, Bharti pursued a legal career.

As a lawyer, he fought for social causes and brought issues dealing with social matters to the court.

An active member during the Jan Lokpal movement, this IIT alumnus fought for justice for the innocent masses.

"After the Delhi gang-rape case, Delhi police tried to falsely convict eight innocent young boys. Bharti fought for those boys and helped them get justice," the AAP party website said.